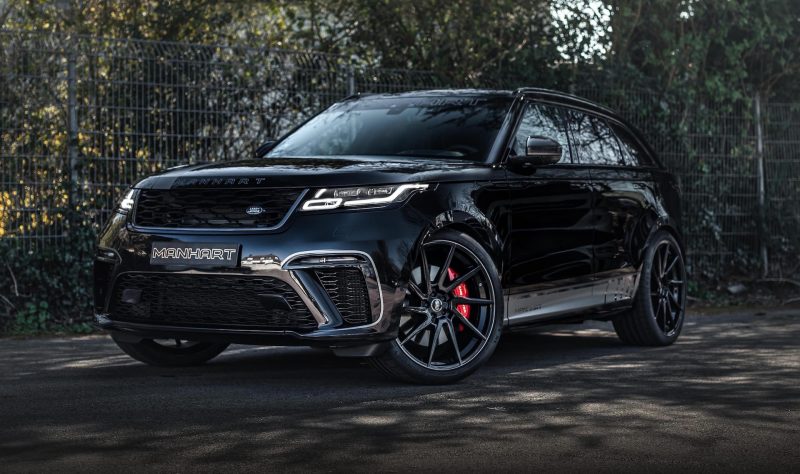 The Range Rover Velar SVAutobiography Dynamic is already the equal most powerful SUV in its class. But in case you want to make sure of that, German tuner Manhart has devised an upgrade package that could be of interest. In other words, it is an incredibly fast machine. Thanks to an engine computer retune Manhart has managed to extract a further 38kW and 70Nm from the engine, resulting in 442kW and 750Nm. And so the company has decided to call it the Velar SV600 package (600 metric horsepower).

You don’t really need to change anything in terms of the Velar’s design; it’s stunning. However, Manhart has come up with a theme that might tickle your fancy if you’d like something a little more distinct and exclusive. For starters there’s a fresh set of 23-inch alloy wheels finished in black, while the body is given a grey racing stripe over the top, with classic decals for the side along the lower doors, also in grey. There’s also a pair of carbon fibre side mirrors for that racy touch.  These all give the SUV a unique two-tone character, enhancing the Velar’s prominent yet elegant foundations.

No changes are made to the rest of the hardware, but Jaguar Land Rover’s Special Vehicle Operations division already has everything covered. The Velar SVA features massive brakes, special air suspension that’s tuned for sportiness, a recalibrated eight-speed automatic and all-wheel drive system, with a typically luxurious interior complimented with sports seats and SVO details.

Interested? Head over to the Manhart website for more details. The company says it can also provide upgrades for the suspension, brakes and interior on request.