Lotus is ripping through media today like a tornado. There’s reports of the company going into administration, reports of CEO Dany Bahar going on ‘leave’ (fired), and rumours of Zhejiang Youngman Lotus Automobile interested in buying out Lotus. 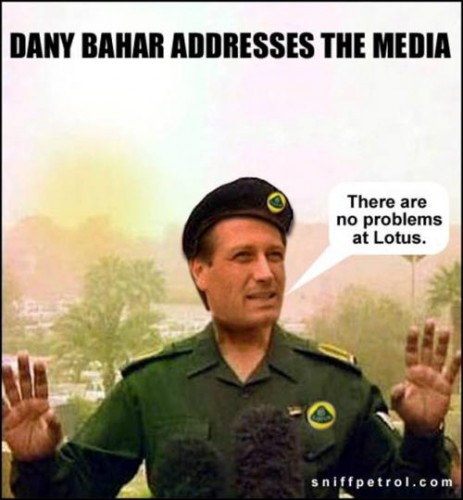 Zhejiang Youngman Lotus Automobile is the official Lotus importer in China, so there is some reason to believe this could be the case.

All these reports and rumours have been brought up because Lotus is carrying a fairly hefty debt – said to be approximately £200 million. So it’s only natural various industry experts would dig into this to figure out how Lotus will get out of it.

Lotus isn’t happy though, and has released a press release specifically targeting those reports and rumours. Lotus attempts to prove every one of them wrong.

The company addresses up to five rumours. Take a look below for the full press release:

Never let the facts get in the way of a good story….

Take a little look at what we found online. Don’t you think it’s funny? We do. We had a good old giggle. After all, we love a bit of self irony, just as well really. Although it’s funny, this one’s not accurate but then again, why let the facts get in the way of a good story? The inconvenient truth is – surprise, surprise – we have never said that there are no problems at Lotus.

So whilst lots of people obviously feel the need to comment on Lotus’ current situation in the absence of proper facts or evidence, we can’t ignore these particular mistruths any longer even if we would like to, so we have decided to turn a negative into a positive and use this hilarious piece of ‘art’ to set the record straight regarding the status quo at Group Lotus and try to return a little stability to a fast changing situation.

You can thank good old Tony Fernandes for these two. Don’t take everything he tweets too seriously – perhaps he’s still frustrated about owning Caterham instead of Lotus and the fact that he fights HRT and Marussia instead of Mercedes and Ferrari in F1.

And whilst we’re on the subject of jokes – do you know the latest F1 joke? Mike Gascoyne, Caterham Group’s Chief Technical Officer, has gone missing. Why? He’s looking for the 30 to 40 points he predicted for the last F1 season. Funny.

Speaking of F1: It seems that one special so called ‘independent’ source is at the root of the lion’s share of damaging rumours and misleading stories. The delightful Joe Saward which leads us nicely to….

False rumour #3: Joe Saward is JUST an independent journalist.
Fact: He is an active Director for the Caterham Group.

And unlike some, we don’t want to get too personal, so we’ll leave it to you to judge how ‘independent’ his stories about Lotus are.

False rumour #4: Group Lotus is no longer involved in F1.
Fact: Lotus F1 Team and Group Lotus have reshaped their commercial relationship earlier this year. The new governance agreement signifies the continued commitment of Group Lotus to the team and the sport.

Group Lotus’ branding and marketing rights and subsequent activities remain unaffected by the new agreement until at least 2017. Alongside continued branding and title partnership status, Group Lotus is also the exclusive master licensee for all Lotus F1 Team merchandise.

The new agreement was reached following Group Lotus owners Proton providing team owners Genii with a £30m loan which is repayable within three years. In order to secure the loan Genii used 100% of the F1 team’s assets as collateral meaning that under the conditions of the loan agreement Proton have been given full title guarantee to all plant, machinery, show cars, computers, office and the Lotus F1 Team headquarters.

In addition Proton retains the rights to purchase 10% of the F1 team. Another 10% share option will be activated if the team default on their loan obligations with Proton.

Again we leave it to your judgement how ‘bad’ Lotus’ current situation in F1 is. And speaking of bad situations…..

False rumour #5: Group Lotus is going into administration.
Fact: Rubbish. The takeover of our parent company Proton by DRB-HICOM couldn’t have come at a worse time, but up until that point Proton was (and still remains) fully committed to our five year business plan to create jobs and to expand the factory and business. With the takeover process the funding has been restricted and DRB-HICOM is taking time to understand what to do with the business. DRB-HICOM is currently in the middle of due diligence of Group Lotus and there have been and continue to be positive discussions between Group Lotus senior management and senior management at DRB-HICOM both here in Hethel and in Malaysia. At no point has DRB-HICOM indicated to Group Lotus that it intends to put the company into administration. The over-active rumour mill is seriously damaging our business reputation, image and credibility but it is what it is.

The simple fact is, and we haven’t denied this – Lotus is going through a very difficult phase at the moment but we are showing true fighting spirit every day in trying to keep this vision alive. This is also a fact – no matter what people outside of Lotus may say or tweet or blog.