A rough teaser showing the side profile of the upcoming Lamborghini SUV concept has been released. The hotly anticipated SUV will be unveiled at the 2012 Beijing Auto Exhibition next week. 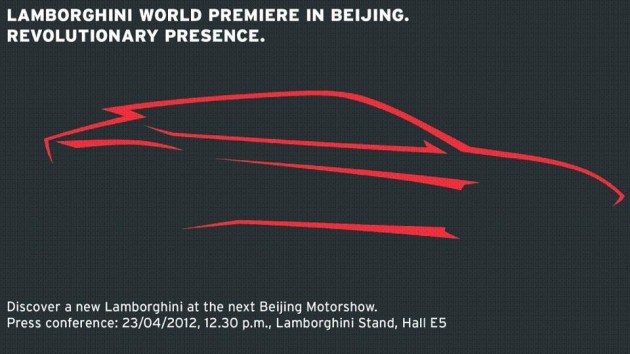 The image is displayed on the Lamborghini invitation to the show, with the words; ‘Discover a new Lamborghini at the next Beijing Motorshow… at 12:30pm’. It provides official confirmation the SUV will debut in just four days.

No specific details on the new Lambo SUV concept have been revealed or even leaked at this stage, it’s going to be a very exciting showcase. Power is expected to come from a 5.2-litre V10, borrowed from the Gallardo, however, we will have to wait and see.

As for its styling, the concept is likely to feature sharp panel contours, with a pointed front end – as previewed in the image above – similar to the Estoque sedan concept, and a very sporty and swooping rear end. It’s likely to wear huge alloy wheels, and feature a chunky diffuser at the back.

Look out for plenty of details on this, and lots of other Beijing show news, on our front page in the coming days.