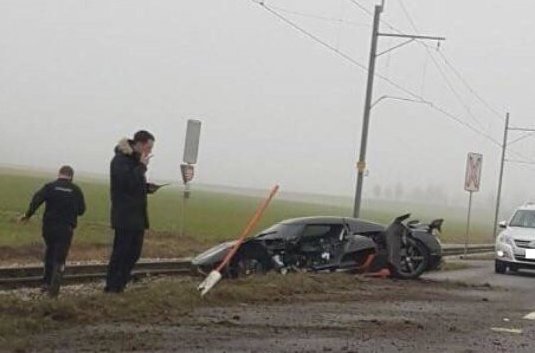 A spanking new Koenigsegg Agera RS was involved in a serious crash in Switzerland earlier this week, completely writing off the exotic, record-breaking hypercar.

Firstly, it’s understood nobody was injured in the crushing accident, but judging by the extensive damage in the photo, which circled around social media, the crash must have involved some decent speed.

According to reports the crash occurred during a supercar rally of some kind, along a stretch of road in Saint-Cergue, Switzerland. The Agera RS appears to have spun at least a couple of times, as evident by the dirt sprayed across the road. It’s also said the car damaged the railway line that runs right next to the road, causing delays to not only road users by also the train system.

The Koenigsegg lost its front wheel and suffered extensive damage along the side, with the door looking like it was ripped off during the off-road excursion. We’d be guessing the car probably won’t live on to see another day, not without a major rebuild anyway.

Koenigsegg is planning to build just 25 examples of the RS, which makes this an even sadder sight. Prices start at around 1.5 million euros. It features a number of bespoke components and is made from exotic materials, and is one of the most powerful and fastest production vehicles in the world.

Power comes from a 5.0-litre twin-turbo V8 that produces up to 1000kW. Koenigsegg recently set a new world record top speed with the car, achieving a mind-blowing two-direction average of 447km/h. We’re sure the driver wasn’t looking to achieve such as speed but we’re guessing the car doesn’t exactly hesitate in trying to get there on every chance.