You may remember the Kia Optima Hybrid Superman project car teaser from a couple of weeks ago. Well, the heroic sedan has now been unveiled at the 2013 Chicago Auto Show in the US. 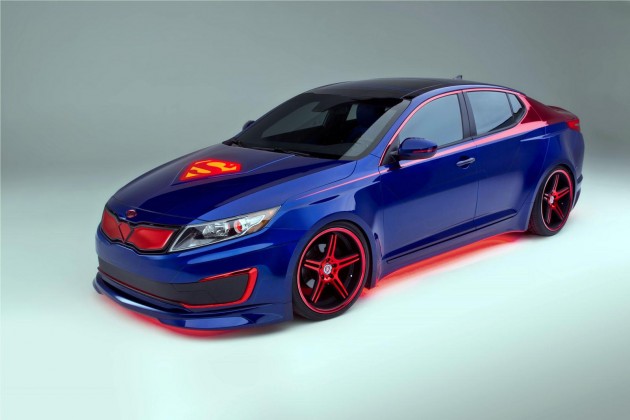 Featuring a distinct blue, red and yellow colour scheme, the one-off was created by DC Entertainment and Super Street magazine, in conjunction with Kia, as a way of supporting the ‘We Can Be heroes’ charity campaign which helps families who have suffered in the droughts in the Horn of Africa.

Although the Optima doesn’t have the ability to see through walls, fly, or lift a million times its own weight, in fact, it doesn’t have any super-natural powers at all, what it does have is a custom bodykit, a set of anodised red alloy wheels, and a sports suspension setup.

“As the most recognised Super Hero in the world, Superman is a symbol of strength and integrity, making him the perfect character to join forces with Kia’s first-ever hybrid to create a customised ride powered by a robust and efficient powertrain.”

The powetrain of the US Optima Hybrid consists of a 2.4-litre petrol four-cylinder paired with an Atkison Cycle hybrid system. Overall output is rated at 154kW and 265Nm

Inside is similarly decked out, with blue and black leather and an overall blue and red two-tone colour scheme. It also has a ‘Superman’ steering wheel to finish it off.