McLaren Mercedes driver Jenson Button has cruised to victory in the 2012 Belgium Formula One Grand Prix at Spa-Francorchamps as many of his rivals bundled out of the race on the very first turn. 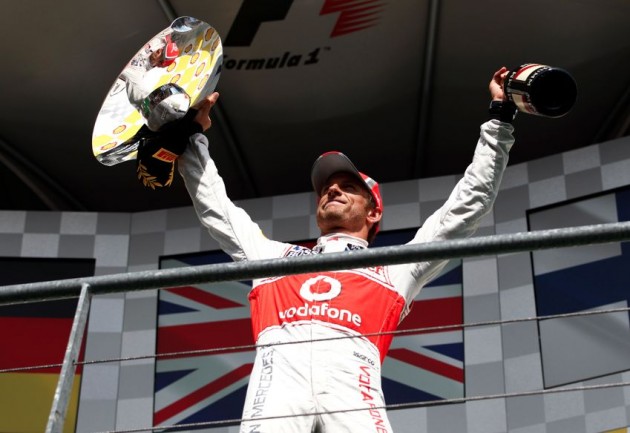 Ferrari’s championship leading driver Fernando Alonso, Button’s teammate Lewis Hamilton, Sauber’s Sergio Perez and Lotus driver Romain Grosjean all ended their races on the very first turn. Hamilton became a high-speed bowling ball and plowed through his opponents after being tangled with Grosjean just seconds after the lights went out.

Alonso not only had his points lead slashed, he also came close to being badly injured as Grosjean’s car flew over the top of the Ferrari, inches from his head.

The accident saw an abundance of debris all over the circuit and took four laps under the safety car for the race to restart. Button flew away as the racing went back to green and didn’t even look like losing the lead.

The chaos at the first turn saw many drivers gain and lose positions such as Aussie Toro Rosso driver Daniel Ricciardo who found himself sixth after starting 16th on the grid. Webber also made a gain to 9th after starting 12th.

The Aussie drivers both scored points with Webber coming home sixth while Ricciardo finished ninth. Webber’s teammate Sebastian Vettel was the big gainer of the race with the world champ finishing second after starting 10th. Lotus driver Kimi Raikkonen also had a solid race to score a podium after starting fourth.

Force India driver Nico Hulkenburg came home fourth after starting 12th while Ferrari’s Felipe Massa had one of his best races of 2012 with a fifth placing after starting 14th.

The next F1 race is in just seven days at the famous Monza circuit for the Italian Grand Prix.