V8 Supercars champion and Holden driver Jamie Whincup has scored a hatrick of wins at the Abu Dhabi Grand Prix to move even closer to a another championship title. 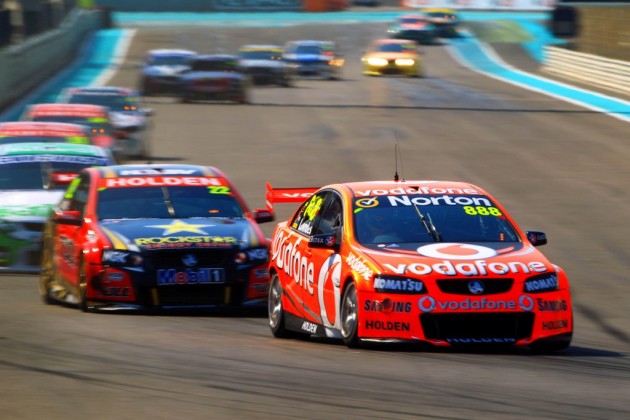 Whincup took out all three races as the V8s supported the Formula 1 at the United Arab Emirates circuit.

While they only got 12 laps a race, there was plenty of action from the Australian series including a huge fire to the Commodore of Kelly Racing’s Karl Reindler’s.

The accident was erily similar to Reindler’s firey crash in Perth in 2011. Luckily though, he escaped unharmed from the car.

“I looked to my left and couldn’t believe I could see fire in the car again,” Reindler told of the incident afterwards. “I felt the heat on my face and the first thing I though obviously was back to last year and to just get the hell out of there.

“I didn’t worry about unplugging any of the ancilliary items – the cool suit, helmet fan, the radio the water – I just got out. I figured if I ran fast enough they would snap of, which they did.

“I am honestly fine. I was shaken up, just because of the memories from last year. I’ve dealt with last year and as far as I am concerned that was just an unfortunate incident. I have no injuries this time. I can just forget about today and start working towards Winton.” 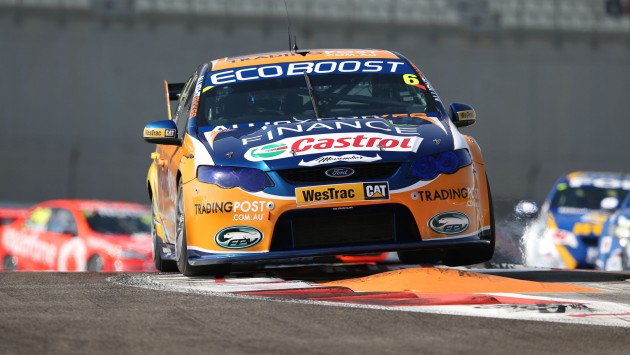 The three victories to Whincup made it 100 victories for the VE Commodore, and on the same weekend his chassis overtook Marcos Ambrose’s BA Falcon to become the most successful car in V8 Supercars history in terms of wins.

Whincup said he was proud to take his Holden into the record books.

“I’m glad to be a part of that,” Whincup said. “I think I’ve got 27 (of those) I believe so I’m happy to be part of the 27 per cent of that record. Considering how many drivers are out there I’m pretty proud of that. We love to represent Holden who are a major supporter of ours. Anything we can do for them is good.

“You go back to April-May and it was pretty one-sided the other way. We have dug deep and won 11 in a row and now we have won four, so we’ve had a good run home.”

Whincup now has a 296-point lead over nearest rival Mark Winterbottom from FPR who finished sixth, fourth and fifth in the three races – with just two rounds to go. But he’s not claiming his fourth title just yet.

“Until it’s mathematically over I won’t rest,” said Whincup. “I won’t be chilling out on the back this next two weeks. I would be much more comfortable if we had one event to go. We have worked too hard this year. Not only did we get ourselves in a position to lead. To turn the tide – don’t undereeeeeestimrrrate that.”