Only points penalties at the season-ending Sydney 500 V8 Supercars event will prevent TeamVodafone’s Jamie Whincup from securing his fourth championship title in four years, after finishing first and third at Winton Raceway over the weekend. 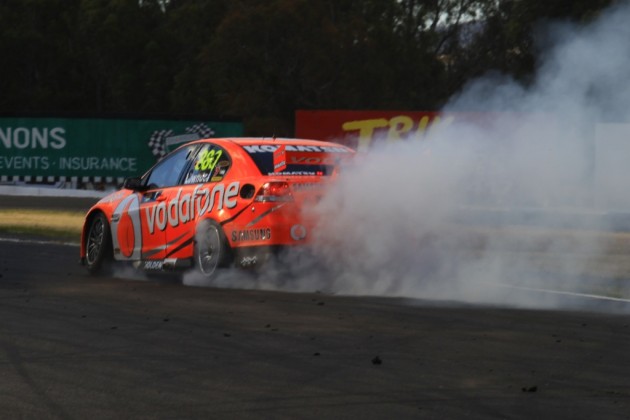 Holden TeamVodafone also secured the 2012 Champion Team Award at Winton, also the fourth time the team has won the title in the last five seasons.

Despite wrapping up the title, Whincup refused to start celebrating until after the season finale at Homebush.

“What do you want me to do – jump on the table or something?,” he said when asked if he was going to commence celebrations for his fourth title.

“There’s no opportunity to celebrate anything, it’s that busy, so why not let it bottle up until the end of the year and let go then.

“I don’t really want the year to finish. We are going to go to Sydney, enjoy ourselves and try to finish off the year the way we know we can. I don’t think we have been on the top of the podium in Sydney so that’s a goal for sure.”

It all almost came unstuck in the second of two races at Winton for Whincup however, he had to serve a pit lane drive-through penalty for allowing his wheels to spin whilst on the ‘jacks’ during a pit stop. Amazingly, he climbed his way back on top for a podium finish. Whincup admitted he engaged the clutch pedal too early during the stop.

“The fuel rig came off the car and generally it drops straight after,” Whincup said. “I dropped the clutch and the wheels spun once or twice before I touched the ground. I knew I had done it. I thought hopefully no-one was looking. It was a mistake but I won’t slit my wrists over it”.

Whincup’s title win somewhat overshadowed teammate Craig Lowndes’s race win. Despite having to double stack in the pits behind Whincup during a safety car, Lowndes took out the race after starting fourth on the grid.

“To stack in the pitlane was obviously a bit frustrating,” Lowndes said after Sunday’s race. “But all in all what a fantastic job TeamVodafone did.

“Obviously I’m delighted with the result, but we’ve got a bit of work to do to try and get second in the championship. If we can keep winning races, that’s a great way to move forward.

“But I’m looking forward to Homebush and seeing what we can do there.”

Ford Performance Racing’s Mark Winterbottom had yet another weekend of being bridesmaid, with a second place on Sunday to go with a fourth place on Saturday.

Stone Brothers Racing were the next best team in both races. Lee Holdsworth scored his first podium in a Ford Falcon with a third on Saturday while teammates Shane van Gisbergen and Tim Slade came fourth and fifth, respectively, in the second event.

V8 Supercars will have the final ever Holden versus Ford round at the Sydney 500 in Homebush in two weeks, running on the weekend of November 30 until December 2.