Jaguar has announced a new F-Type Chequered Flag limited edition model for Australia, designed to celebrate 70 years of Jaguar sports cars following the launch of the XK 120 back in 1948. The Chequered Flag edition is being introduced as part of the MY2020 rollout. It’s being launched in a range of flavours, including coupe and convertible, with four powertrain options. Buyers can stick with the base model 2.0-litre turbo four-cylinder that produces 221kW, fed into a rear-wheel drive system. Alternatively, there’s also a 3.0-litre supercharged V6 producing 250kW for the V6, or a 280kW tune for the V6 S that’s available in RWD and AWD form.

So, what’s so special about the special edition? A black contrast roof is applied to the coupe, with Windsor or Ebony leather for the standard Performance seats with embossed headrests. Dark brushed aluminium is also used for the centre console trim, inspired by Jaguar’s motorsport success, while the steering wheel features a subtle chequered flag logo and red stripe at the 12 o’clock position.

“Perfect proportions, design purity and visual drama – every Jaguar must express these qualities, and none more so than F-Type. In creating the Chequered Flag we’ve focused on details which enhance F-TYPE’s presence and promise of performance – and in doing so, made a fitting celebration of 70 years of beautiful, fast, Jaguar sports cars.” 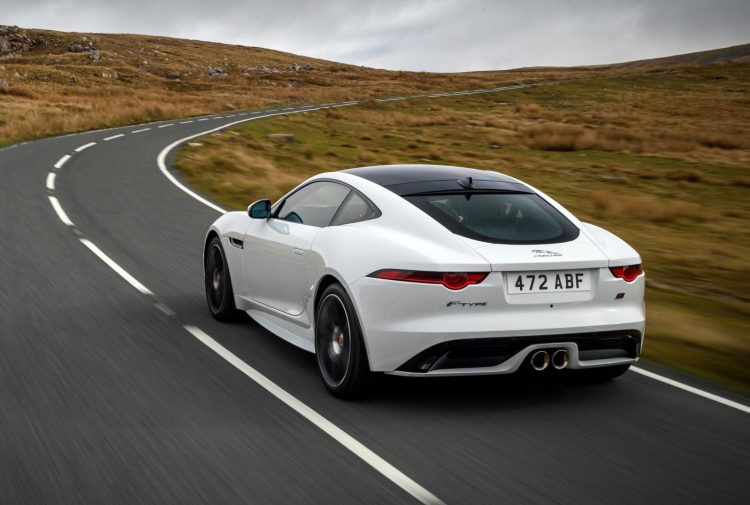 Inside, passengers can play around with the Touch Pro infotainment system with tunes played through a Meridian sound system. For the first time, Apple CarPlay and Android Auto is offered via the 10-inch touch-screen. Buyers can also choose between red or cirrus contrast stitching for the upholstery.

Coinciding with the launch of the Chequered Flag edition, Jaguar has also implemented some suspension changes for MY2020. It includes the fitment of the upper rear ball joint being brought across from the SVR variant to the F-Type R. Ride comfort at low speed is improved, Jaguar says. A rear-view camera and front parking sensors are also now included as standard across all variants.

The special edition is on sale now from the following prices (excluding on-road costs):