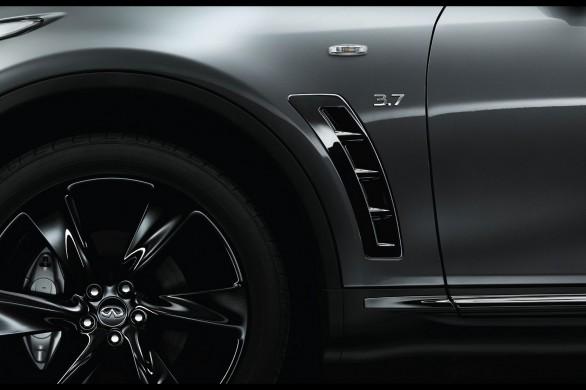 A new Infiniti SUV limited edition is on the way, called the QX70 S Design. It will make its international debut at the Paris Motor Show next month.

Based on the QX70 (previously called the FX), the S Design will come with a number of unique elements, including a set of 21-inch black alloy wheels for a pure sinister look.

The black highlights won’t stop there either. As you can see in the teaser images the S Design will also get black side gills, sill trimmings, a dark chrome front grille, and some matching headlight covers.

Jump inside and you’ll be greeted with plenty of soft leather featuring special blue stitching, as well as a gloss black centre dash fascia to match the overall dark theme of the package.

As far as we know the special edition will go on sale in various international markets, however, it might not make it to Australia. Stay tuned for more details. The Paris show starts on October 2.