A police officer has had a horrific crash in a Volkswagen Golf R in the UK, completely writing it off. Police were evaluating the hot hatch for possible inclusion into the work fleet. 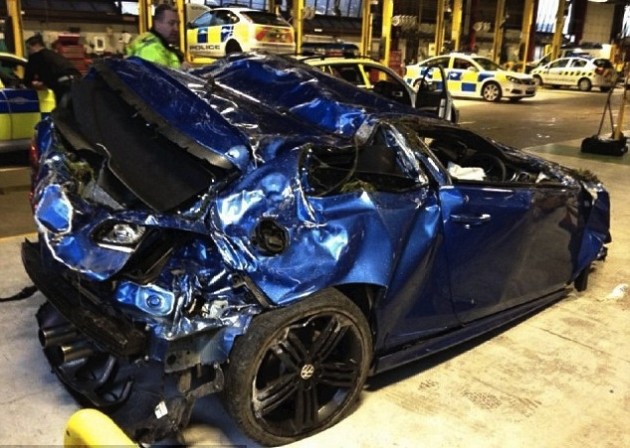 Being a police officer is not only about keeping society under control, but also about setting an example. This is not what you would call setting a good example. If it were anyone else driving the car, they would be instantly branded a ‘hoon’. So that’s what we’re going to do.

According to reports, the police officer took the 199kW (188kW in Australia) all-wheel drive Volkswagen Golf R for a drive at 2am to see if the car was suitable for the police. And, presumably, to see how fast it goes.

Unfortunately, the police officer lost control while negotiating a roundabout. The officer then skidded and clipped a curb or part of the roundabout, sending the Golf up and over onto its roof.

Rescue personnel had to the free the 40-year-old male driver after it eventually ended up back on its wheels at Wharfside Way, Trafford Park.

The officer was released from hospital with spinal injuries, and has been suspended from police duties. Police are still investigating to determine the speed of the crash.

“The car was being tested and it went horribly wrong. Police do use public roads to test vehicles – the risk is reduced by the location and the time when this is done.

“Another officer in a powerful Audi had gone out on patrol with him at the same time – but was patrolling elsewhere when the accident happened. “The Audi driver went to the scene immediately after the crash to help. The VW was on loan as the company are trying to sell them to the force.

“It would appear there were icy conditions on the night it happened. It was being tested in the early hours and the car had been with the force for a couple of days. The idea was to get a few officers to get a feel for it – get a reasonable sample before deciding whether to buy them.”

“As a result of this incident Greater Manchester Police is currently reviewing its policy on officers test driving demonstration cars on public roads.

“That review is ongoing and it would be inappropriate to make any further comment.”

It might seem immature to mock the police making a foolish mistake like this, but if it were a normal civilian, we’re sure the Manchester community would get a stern talking to, with relative ‘crack downs’ put in place.

What do you think? Is it acceptable that police test drive cars like this on public roads? In the UK anyway.