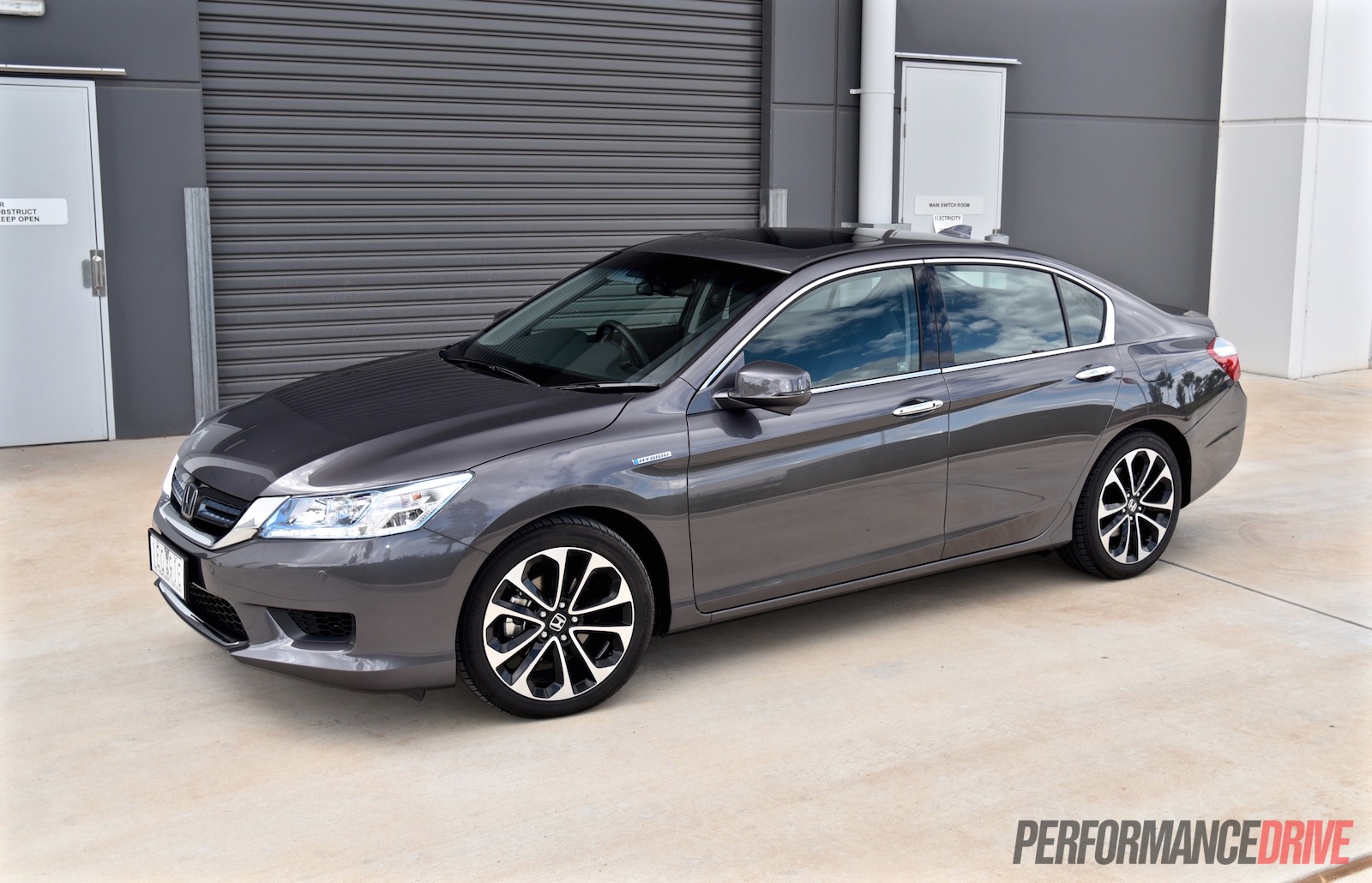 Honda’s range-topping Accord Sport Hybrid launched in the middle of last year, with an entire technology arsenal, some bonus luxury features, and some styling differences to justify the added cost over the otherwise range-topping V6 model. 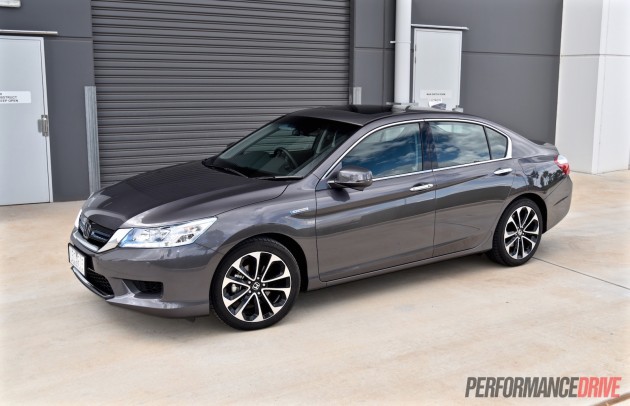 Filling the niche formerly occupied by the Legend, Honda believes this car is more befitting of its ‘Earth Dreams’ mantra. Instead of a two-model lineup, the excellent-to-drive Accord Euro has been discontinued, leaving us with this American-derived ninth-gen model which was launched in 2013.

Honda Accord Sport Hybrid – THE SPECS 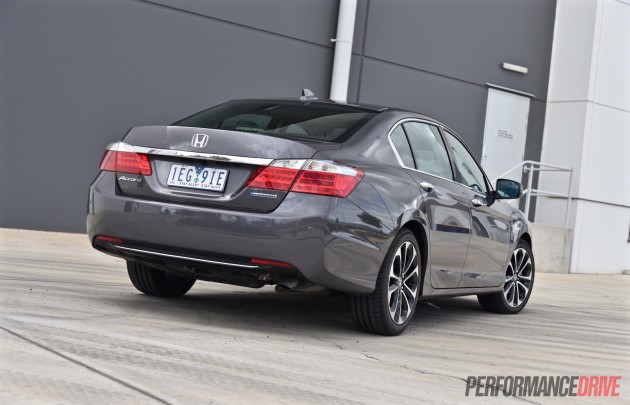 Honda Accord Sport Hybrid – THE PACKAGE

The ninth-generation Accord has sleek lines and proportions, but somehow manages to lack any real design flair or wow factor. Pitched at conservative middle America, the car is inoffensive and neat. Specific to this hybrid model are blue highlights around the headlights and grille for an ‘eco’ theme, and 18-inch alloy wheels.

It offers a very spacious and comfortable interior. Both in the front and rear there is ample space and an airy feeling of uncluttered freedom, resulting in relaxing transportation. The cabin design is complex and not cohesive in some areas, with some dubious and scratchy material choices around parts of the dash and console. However, the superb fit and finish Honda has always been renowned for is present. It all feels glued and bolted tightly together, and you get the sense it will remain this way for decades to come.

There are some futuristic touches, such as the ring around the speedometer which glows a different colour depending on the drive mode, and the graphics and colours are quite sharp and ‘computerised’. On the dash are two LCD screens. These blow most passengers away. New cars today come with one touch-screen, and that’s always a great talking point. Two is like having the biggest and greatest LCD TV; bigger (or more, in this case) is better.

The huge 8.0-inch screen at the top is operated by a convenient knob. It, and the touch-screen audio system in the middle, seem to add unnecessary layers of complexity to basic functions, such as tuning radio stations. But, they also reduce some clutter by allowing one screen to do a certain task while leaving the other for other functions.

For example, we love Honda’s “LaneWatch” blind-spot assist system which displays views of the passenger-side via a camera mounted under the side mirror. The top screen instantly switches to the camera as soon as the left indicator is activated, giving you a continuous snapshot of your blind-spot. All cars should come with a technology like this. 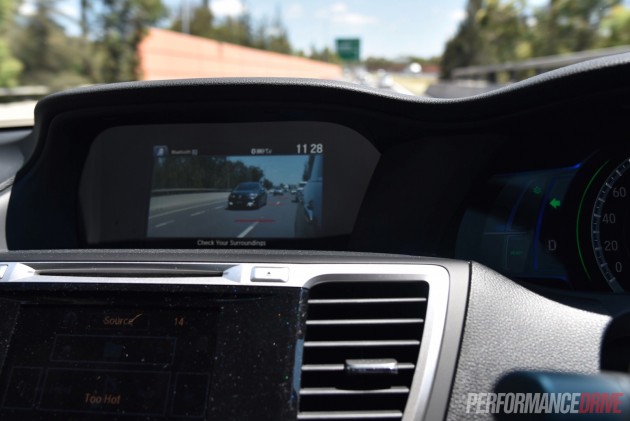 It might have the word “Sport” in its name but we don’t think Honda is fooling anyone; this is a luxury car. Standard luxury features include electric leather seats with heating functions in the front, an electric sunroof and rear windscreen blind, an excellent satellite navigation system with easy-to-read maps, active noise cancelling for a supremely silent drive, and a great keyless entry system that senses your touch.

This hybrid model offers a suite of driver assist technology too, including adaptive cruise control, collision mitigation braking, blind-spot monitoring, a sophisticated rear-view camera with three modes, a HUD emergency stop signal, and a lane-keep semi-automated steering assist system which is perhaps the highlight of them all. More on that later.

The hybrid system is Honda’s new Intelligent Multi-Mode Drive (i-MMD), which consists of a 2.0-litre Atkinson Cycle, 105kW/165Nm petrol four-banger, with two electric motors, for a combined output of 146kW and 307Nm. Official average consumption is just 4.6L/100km, with 107g/km of C02 – comparing favourably to the 5.0 and 5.5L/100km figures for Camry Hybrid and ES 300h. The lithium-ion battery pack has a small 1.3kWh capacity.

Carrying cargo can become quite an issue, with reduced boot space that doesn’t accommodate a spare wheel – a fact that became embarrassingly evident during our time with the car. More on that later. Boot space is reduced from 457 litres in the regular V6 to 415 litres in the hybrid (381L in main section, remainder under floor compartment). It seems even smaller in practical day-to-day use. 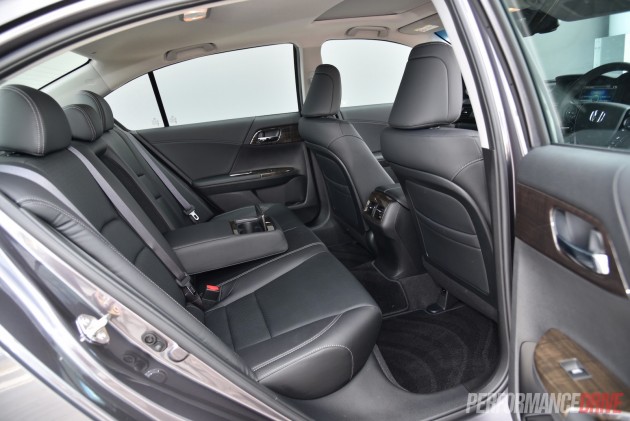 Honda Accord Sport Hybrid – THE DRIVE

Setting off is always a strange sensation in a hybrid. The electric motor gives you instantaneous low-speed urge whenever you need it, with an alien spaceship-esque warp drive whine. Then the Atkinson cycle engine soon kicks in, which is slightly gruff and its revs seem out of sync with progress (that’s the single-speed CVT gearbox for you). Aside from that, noise is nicely contained.

Below Drive is a ‘B’ mode for regenerative braking, where the car spent most of its time in our hands. When in this mode you can watch the battery increase its charge when going downhill or during braking. Speaking of which, the stoppers are very good, except when buried hard they seem to become extremely touchy. We achieved a best 100-0km/h braking test of 38.9 metres in 2.96 seconds. This is a very good result for something that isn’t really a sports car.

Steep and angled driveways expose the overly low front end, which has a tendency to scrape – perhaps this is what Honda means by “Sport”? To be fair though the steering offers a nice, almost-hydraulic feel, while the body is composed when threading through sweeping switchbacks. Ultimately though it doesn’t feel as engaging to steer as the old Accord Euro. Despite being a hybrid it does offer a relatively low kerb weight of 1642kg, making it a shade lighter than the 1667kg V6 version. In short, it’s nimble enough but still a big American cruiser at heart.

At this point we found the Accord Sport Hybrid to be more inclined to luxury driving than anything sporty or even interesting. Then we took it out on the freeway and discovered something very unique and very impressive.

Honda’s lane keep (steering) assist system is active, rather than reactive like other systems out there, meaning it will keep you within the lane rather than pull you back in if you drift aside. This effectively gives the car semi-autonomous capability without the requirement for hands to be constantly on the wheel like more modern systems. It works well in conjunction with the adaptive cruise control, making highway driving a dream. This, believe it or not, can add a real fun-factor to the car just because it is so interesting. There are only a handful of other cars on the local market at the moment that are capable of autonomous driving to this extent. Not that we advise it, the on-board computers will ask you to place your hands back on the steering wheel, but after about a minute of totally hands- and feet-free driving with the cruise engaged. 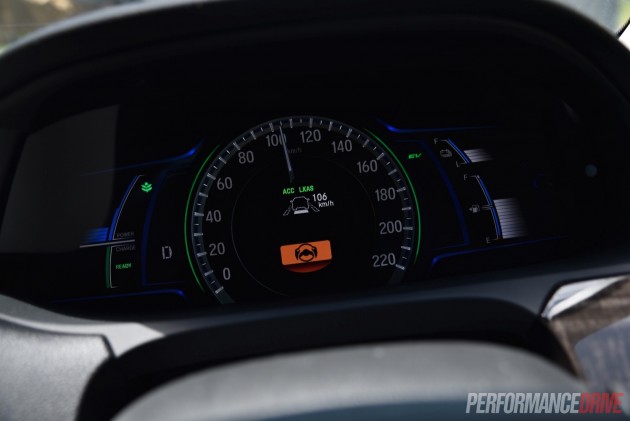 Around town we switched the Honda into EV mode only to find it self-cancels above 50km/h. Surely 65km/h would make it more usable on Australian streets? Regardless, we saw an impressive 5.9L/100km during our week-long test. So, that’s full marks to Honda on the efficiency front.

Just as we discovered a pleasant surprise on the freeway, we discovered an unforgivable flaw when the Sport Hybrid met one of Australia’s notorious potholes. A portal to hell the size of a skateboard sent one of the front wheels crashing through to the bump stops, which was too much for the tyre, resulting in a puncture. The 235-series Michelin is not one available at every corner tyre shop either, causing further delays.

In a car equipped with a spare this would not have been a catastrophe, but the factory-fitted 12V tyre sealant pump is a joke. Honda Roadside assist was happy to cover the tow-truck but not the replacement tyre. We’d insist that you get a spare wheel thrown in some how.

Honda Accord Sport Hybrid – THE VIDEO

Honda Accord Sport Hybrid – THE VERDICT

The Accord Sport Hybrid is loaded with plenty of luxury car fruit, excellent displays for the hybrid system, and some really cool driver assist technology. While fundamentally the car is sound, the layout and presentation are not as special as other vehicles in this price range. Nevertheless, it is very interesting to drive, even if more luxurious than sporty. It offers exceptional fuel economy, and it feels technologically advanced.

Honda is slowly regaining the driving appeal it was renowned for before the start of the last century. With cars like the Civic Type R and NSX on the horizon, we’re confident Honda can combine its Earth Dreams philosophy with real driving appeal. Interestingly, the US market also offers the Accord 2.4 and V6 (also offered in Australia) with a six-speed manual.