American tuner Hellion has developed a twin-turbo kit for the sixth-generation 2015 Ford Mustang GT. The company is set to showcase the performance package at this year’s SEMA Show, taking place in November. 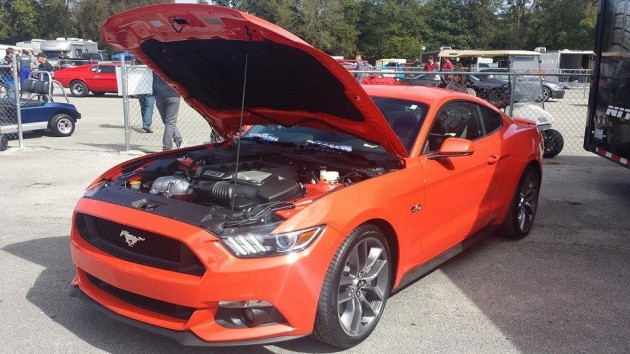 The kit sees two 62mm Precision turbochargers placed neatly between the Mustang’s 5.0-litre V8 and the radiator, mounted via stainless steel tubular piping. Hellion’s last twin-turbo kit for the previous generation Mustang GT developed more than 900hp (671kW). It’s safe to assume the company will be out to trump that figure when it puts the new kit on the dyno next week.

The twin-turbo kit will face fierce competition from fellow tuners/car developers such as Vortech, Saleen, and Hennessey, who have also just recently announced performance kits for the new Mustang that offer serious performance gains.

Set to launch in the middle of 2015, the Ford Mustang will take its place in Ford’s Australian showrooms for the first time in its 50 year lifespan. The sixth generation Mustang also marks the first time the famous sports car has ever left the factory in right-hand drive.

If you’d like to see the Hellion twin-turbo kit in person look for a Competition Orange Ford Mustang GT on the Hellion stand at the SEMA Show, held at the Las Vegas Convention Center from November 4 to 7.