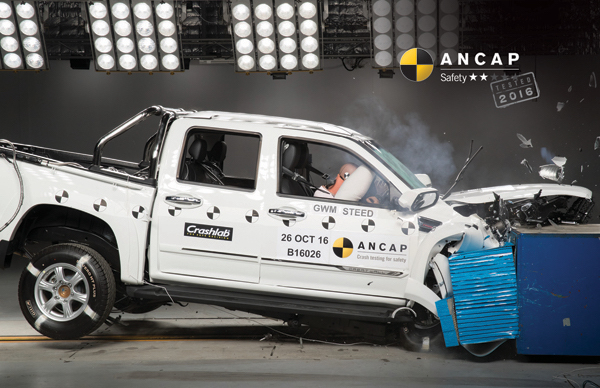 ANCAP has run its series of crash tests on the latest Great Wall Steed, and, as no surprise really, it has returned with a dismal two-star safety rating.

Great Wall has claimed the all-new ute offers “outstanding levels of performance, value, safety, and comfort,” however, it seems the safety element at least is a big fat lie. ANCAP says the underpinnings of the new Steed are essentially the same as the previous generation vehicle, which also offered poor safety.

The crash test results returned “excessive footwell deformation” along with pedal displacement, and steering column movement that caused a threat to knee injury for the driver. Dash components were also a potential threat for both front passengers.

ANCAP says the Steed is not suitable for transporting children as there are no top tether child restraint anchors. CEO James Goodwin spoke about the poor result in a statement, saying:

“This is a disappointing result for consumers and the brand. While the Steed is equipped with six airbags and electronic stability control, features which were not offered on the previous model, there has been little change to the vehicle’s structure to improve the safety of the passenger cabin.”

In other safety news, the new Hyundai i30, latest Honda Civic sedan, and Mercedes-Benz Marco Polo Activity van were tested in the latest round, and all achieved the full five-star safety rating.