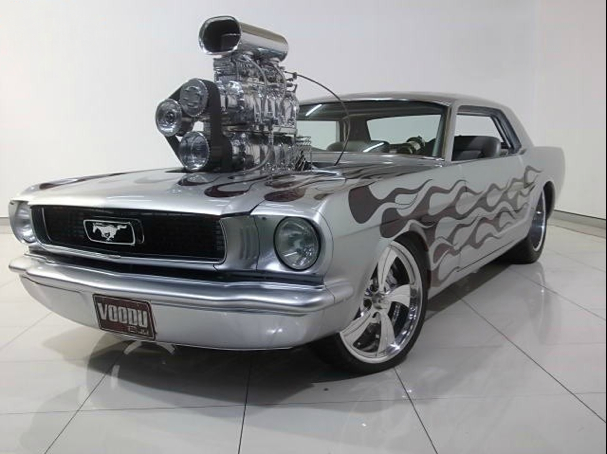 If you’re waiting for the new Mustang to arrive here in Australia, then maybe consider this instead? What you see here is a twin-supercharged, chopped-roof, complete show car from front to back that brings with it some serious street credibility, built by the king of burnouts, Gary Myers.

The engine is a Ford 393ci big block V8 equipped with not one, but two superchargers. The chassis is a full-tube layout, with the chopped roof neatly concealing the custom roll cage.

Hiding under the rear guards is a four-link rear and a nine-inch diff – Gary has been known to rip a skid or two, so no doubt he wanted something strong enough to cope with the serious amount of grunt on offer. Speaking of which, no specific output was published with the ad, but we have little doubt it’d have trouble turning its extremely-wide treads.

Chances are you’ve probably seen this car at MotorEx or Summernats. If you have been lucky enough to see this car in person, you’ll no doubt remember its impeccable paintwork. The whole paint job is completely custom, as is the detailed engine bay and undercarriage.

Well known muscle cars in Oz don’t come more high profile than Gary’s silver ’66 Mustang. So it’s no blow to the brain that the asking price for this exclusive car is $199,990. The car has just 700km on it, most of which we’re sure have been done driving in and out of many of the various shows it’s been to.

Head over to the original CarSales ad for more info.