A very rare and unique 1991 Ferrari Testarossa 4.9 Coupe will be up for sale at the Top Car Sale, British Car Auctions in Nottingham UK tomorrow. The Testarossa is in immaculate condition with just 9660km on the clock. 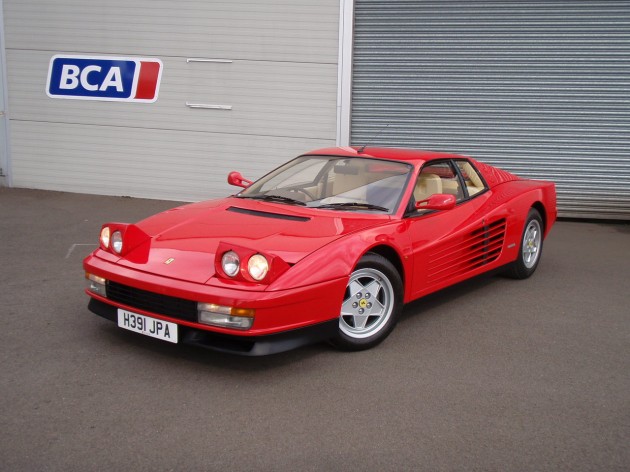 The Ferrari Testarossa for sale has had only one owner since new and features a Crema leather interior finished in a traditional Ferrari Rosso Corsa red exterior. It also comes complete with all original trimmings and sits pretty much exactly as it did in the showrooms in 1991.

As mentioned, the owner has somehow managed to only drive it 9660km since purchasing it new. We’re not sure how, as the temptation to drive it would surely overpower the motivation to preserve it so well. The owner has even kept up very regular servicing, with the service book showcasing eight official Ferrari stamps.

The 1991 Ferrari Testarossa is powered by a 4.9-litre flat-12 using four valves per cylinder and dry-sump lubrication. The mid-mounted boxer engine produces 291kW of power and 490Nm of torque, enough to power the pinup supercar from 0-100km/h in 5.2 seconds and on top a top speed of 290km/h. A quarter mile time of 13.5 seconds has also been recorded – not bad for a 1506kg car.

This stunning Ferrari Testarossa, as well as 400 other prime supercars, including Aston Martins, Porsches and Jaguars, will be auctioned off tomorrow at the British Car Auctions event in Nottingham, Victoria Business Park, Netherfield, in the UK. Head over to www.british-car-auctions.co.uk for more details.