A mint condition 1977 Holden LX Torana A9X Hatch will go up for auction this weekend at the 2012 Meguiar’s MotorEx car show and shine, in Sydney. The A9X is one of only 15 in the world in the ‘Jasmine Yellow’ colour scheme. 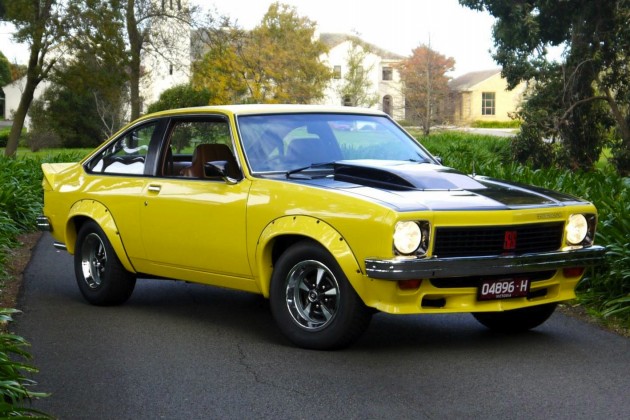 Not only is it one of only 15 in this colour, it’s also one of only three featuring a tan interior. This makes it a very desirable collector’s item, especially as it has just 82,800km on the clock.

With this level of rarity and exclusivity, the Aussie classic muscle car is expected to fetch between $170,000 and $210,000 during the auction. Shannons says that an A9X in need of some work has previously sold for $149,000, indicating a potential very high price demand for this immaculate example.

The Holden Torana A9X is one of Australia’s most iconic muscle cars. It’s also one of the most famous in terms of Australian motorsport. Peter Brock drove one to victory at the Bathurst 1000 with Jim Richards in 1978 and 1979. The car also took out the championship for both years.

As a customer-ordered street car, the A9X was an option package consisting of beefed up mechanicals, such as a 10-bolt differential with heavy duty axles and disc brakes on the rear. It also featured various body modifications including a reverse-scoop on the bonnet to increase underbonnet flow and horsepower.

Power came from a 5.0-litre V8 producing around 186kW and 434Nm, matched up to a four-speed manual transmission. Weighing in at just 1213kg, you can begin to appreciate the sort of acceleration the A9X was capable of.

For your chance to sample some of this Aussie pedigree, head out to the MotorEx show this weekend. This and other classics will be on display throughout Saturday and Sunday before going under the hammer from 3pm Sunday.

UPDATE: The Torana passed in at the auction. The Monaro GTS pictured below sold for $65,000, while the Barracuda ended up selling for $60,000.