Said to be just one of only around eight in the country, and the only red example, this legendary 1972 Nissan Skyline ‘Hakosuka’ 2000GT coupe is currently up for sale in New South Wales. 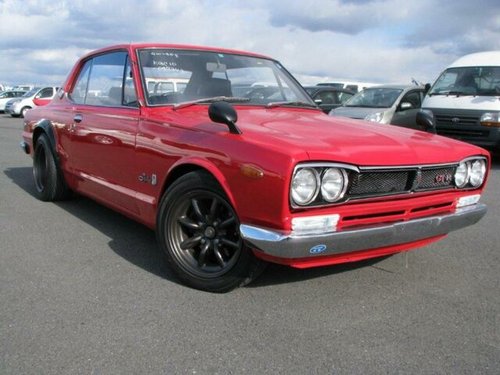 It features a stroker L28 straight-six engine of 3.0 litres capacity, aspirated by three 45mm Solex carburettors for the ultimate screaming six-cylinder soundtrack. According to the eBay ad, the engine is good for around 150kW at the wheels.

The Skyline is all original, with black interior trim, GT-R charcoal wheels that are offset with deeper dishes on the rear. There’s also the trademark front guard mounted side mirrors, and ‘GT-R’ badging in the front grille.

This is a super rare classic, and a highly sort after model all around the world. The 2000GT KGC10 model was the Skyline that laid the foundations for the first-ever Skyline GT-R ‘Hakosuka’, the KPGC10. Although this is not technically a GT-R, bearing a KPGC10 chassis number, it does appear to have been converted.

The ad says the car has just been imported from Japan and that it sits in mint original condition, free of rust. It’s located in Concord, Sydney.