Take one of the world’s smallest cars ever made, the three-wheeled 1959 BMW Isetta, and fit it with one of Detroit’s finest V8 engines. Then, supercharge it. The end result is this nasty looking thing you see here, called the Isetta Whatta Drag. 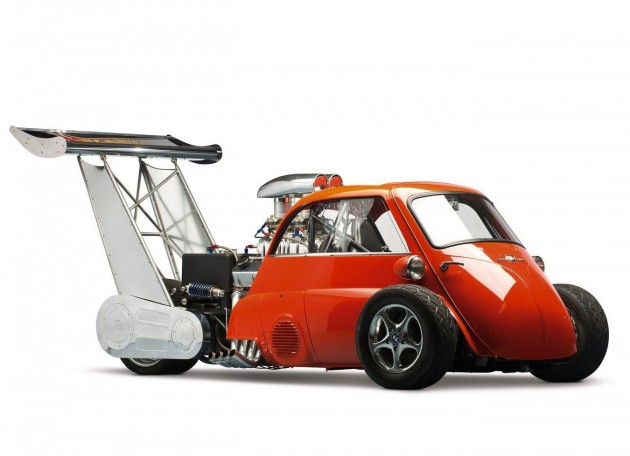 Although it’s not registered or intended for road use, obviously, this Chev-powered mosquito is actually drivable. It uses a 502 cubic inch V8 (8.2 litres) with a large supercharger bolted on top. Working together, they produce an almighty 544kW of power (730hp).

It’s unknown what sort of speeds, or acceleration, is possible in the ballistic creation, however, it has been setup to handle plenty. It features a two-speed manual transmission, discs brakes with an AP balance bar, and of course a huge rear wing to keep it planted. 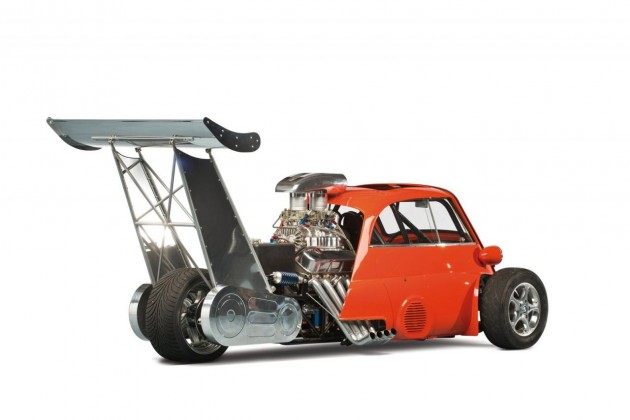 Other highlights include M3 front suspension, and a single rear wheel measuring 18 by 13 inches. The drive wheel is wrapped in a Sumitomo HTRZ II tyre. The front tyres are BF Goodrich G-Force items.

If you’d like to have a car/rocket-with-wheels like this sitting in your garage, good news, this example is up for sale. It’ll go under the hammer at an upcoming RM Auctions event taking place on February 16 in Georgia, USA. The insane machine is expected to fetch around US$75,000 to $100,000.

Head over to the auction site for more information.