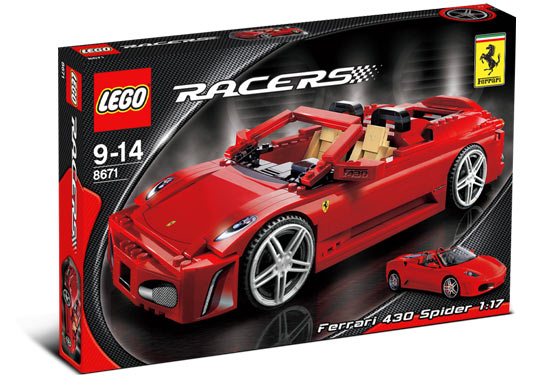 Ferrari is no longer the most powerful brand in the world, according to a recent study by Brand Finance. Now in top place is Lego, innocently enough.

Brand Finance conducts a study every year to discover which global brands are the most powerful, based on familiarity and brand recognition around the world, staff satisfaction, loyalty, and promotion.

This year Danish toy brand Lego sits as the number one most powerful brand, no doubt helped by The Lego Movie which hit cinemas last year. Lego is perhaps one of the only toy brands that we can all relate to, with many homes around the world familiar with a confusing box of unsorted and annoyingly sharp-edged cubes and rectangular prisms.

Sitting in number two spot was PricewaterhouseCoopers (PwC), followed by Red Bull. Ferrari dropped from top spot to number 10 this year, however, it sat as the only automotive brand.

Coming in at 13th place was Toyota, despite officially being the biggest car manufacturer in the world for 2014. BMW came in at number 15 to round out the top auto brands on the list.

If sales have anything to do with it, Ferrari has been on a steady increase in Australia at least. The brand sold 106 cars in 2013, followed up by 113 sales during 2014.