It was a Friday afternoon in a Circular Quay wine bar. The venue’s windows were already fogging up from the businessmen and women letting off steam. My section was filled with the usual bunch of blokes celebrating a successful deal, and it was fast-becoming a very boozy afternoon. 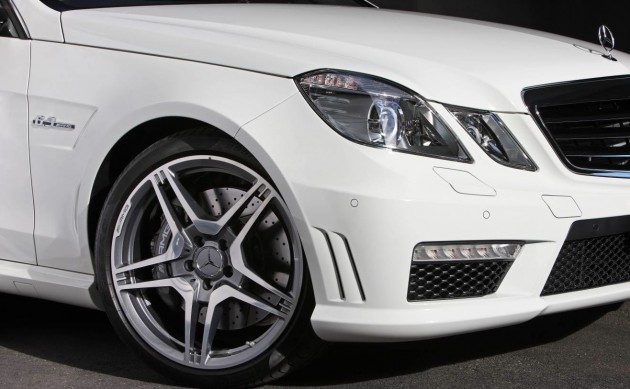 After several bottles of wine with a three-digit price tag, one gent got off his seat and approached me with a Godfather offer (one I couldn’t refuse). He explained that his wife wasn’t all too impressed with his latest after-hours activities and wanted him delivered home ASAP. In his defense, he did the sensible thing by not getting behind the wheel, but his decision to throw the keys to a 20-year-old waiter (me) might not have gotten the thumbs up from the missus.

After pleading with my boss who was far from impressed that I was bailing ship on a Friday night, we set off to the near-by car park. “What do you drive?” I asked, hoping this guy knew and loved his cars. “Just an E-class,” he replied. Regardless, I was excited at the prospect of driving around instead of a night of opening bottles of Spanish Rioja worth more than my pay-packet.

As he unlocked the doors from a distance I noticed a few embellishments that don’t feature on a regular E-Class, details that stand up to a seasoned car-watcher such as myself. Quad pipes, large alloys, subtle differences in the bodywork and a not-so-subtle E 63 AMG badge staring back at me. “Hope it’s not too much for you,” he said, with his voice echoing in the underground car park. I was barely able to hear him as my imagination was already filled with the rumbling exhaust of that machine-gun 6.2-litre V8.

As I sat in the driver’s seat, the reality that $250,000 of AMG was at my fingertips really kicked in. And it took me several minutes for my fingers to stop shaking. It sounds like I’m taking some liberties with my writing, but my hands were shaking. We started cruising up George street. I didn’t let it go above 3000rpm. We left the circus of the city and he started to egg me on. “Didn’t know you drove like a Grandma,” he joked as we stopped at a traffic light. At this point my nerves had cooled, the car seemed friendly at low-speed. ‘Why not throw it into sport and see what it does off the lights?’ I thought to myself. We hit 80km/h before I could even conjure a high-pitched squeal.

Before long, I was pressing the stop engine button at his house where without a moment’s delay he looked to me and said, “Take it for the weekend.” I was silent because I was waiting for him to laugh, take the keys out of my hand and send me packing. “If you get in trouble with the cops, here’s my number, otherwise I’ll see you Monday morning.”

It was a surreal moment and I only managed to go 500 metres down the road before stopping, just to stroll around the car, taking in all of the details I could. I didn’t sleep very much that Friday night, neither did I the Saturday. I did all the stupid 20-year-old stuff you do with a car like that; I made sure every light was a race to 60, I downshifted a lot more than my old driving instructor would have approved of, just to hear the explosion of the V8. One morning I started the engine and sat on a milk crate opposite with my coffee just to listen to the engine note.

I didn’t once drive with speakers on, that roar was my soundtrack for the weekend and I’ll take it over any band out there.

I was genuinely sad dropping the keys back into the mysterious and brave owner’s letterbox, walking away hoping that it wouldn’t be the last time I got to experience a car like that. He later told me he didn’t even care about the fact that I returned it with an empty tank and tyres balder than Bruce Willis.

This was the moment in my life where I knew I wanted to become a motoring journalist. So here I am. Two years later.
My name is Alexi Falson, and this is my pitch to become a writer at PerformanceDrive.