We already know the Dubai police force has the most flamboyant and intimidating fleet in the world. Now it has added some American muscle to the collection in the form of an enhanced 2015 GMC Sierra. 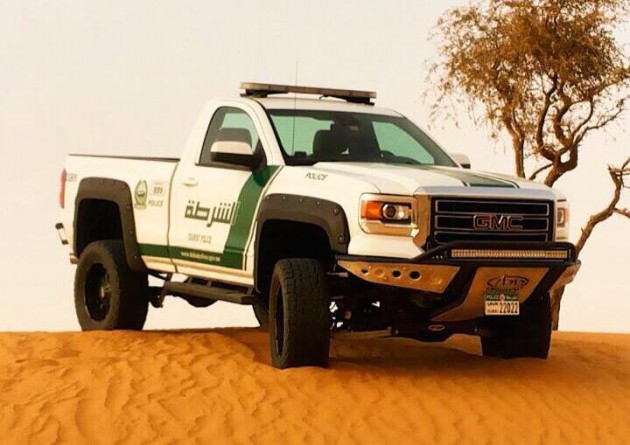 The GMC Sierra shares the same platform as the Chevy Silverado, only this one is enhanced and is now more off-road ready than ever. There’s large wheel arch extensions, tough bash plates underneath for protection, and raised ground clearance with big off-road tyres.

It’s unknown what engine lies beneath the bonnet, but we’ll assume it gets the top-line Duramax 6.6-litre turbo-diesel V8 that develops 296kW of power and 1037Nm of torque.

The Sierra police car joins the likes of the Veyron, BMW i8, Nissan GT-R, C 63 AMG, Aston One-77, and Lambo Aventador Dubai police cars. Like the others, the Sierra won’t necessarily be used for patrol and pursuit services. Instead, it’s just for marketing and community engagement, and to show off the region’s wealth.