BRABUS, known for producing some of the fastest cars to ever slip down the autobahn, including the BRABUS Rocket, has surprisingly revealed an all electric vehicle at this year’s Frankfurt Motor Show, dubbed the BRABUS High Performance 4WD Full Electric concept car. 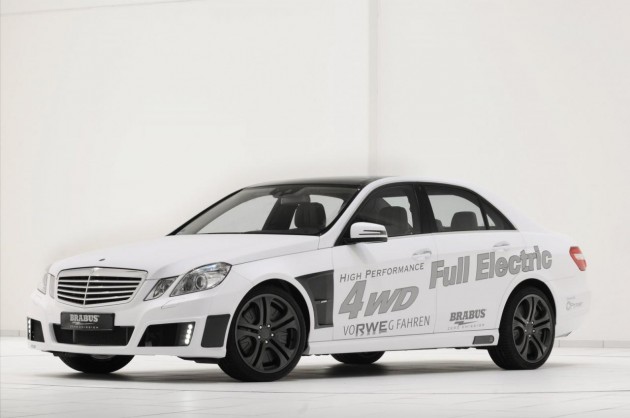 The car is based on the latest E-Class generation (sedan in this case), and features an all-electric powertrain, and an all-wheel drive system.

The BRABUS High Performance 4WD Full Electric concept car has an electric motor built into each wheel hub. Each motor produces 80kW and 800Nm of torque – that’s a bigger torque figure than some supercars, and at one wheel.

If you’re good at maths, you’ll no doubt have multiplied those figures by four to come up with an astonishing figure of 320kW and 3200Nm – for those that aren’t good at maths, it’s a bloody shipload of power. Green power, too.

BRABUS has said the High Performance 4WD Full Electric concept car will go from 0-100km/h in 6.9 seconds, zapping on to a top speed of 220km/h.

Fully charged, the electric BRABUS vehicle will provide a range of around 350km, thanks to a 56kWh lithium-ion battery pack, which is also recharged under braking using an techno electro-hydraulic braking system.

So, for a company known for building cars with stupidly high power figures, and blisteringly fast top speeds, is going green diluting the BRABUS charm we’ve come to know? Or is the company tackling what seems to be the inevitable task of joining the green brigade? One thing is for sure, add driving a BRABUS electric vehicle to your bucket list, because if we know BRABUS, things will only get exciting from here.