In the lead up to the Concorso d’Eleganza Villa d’Este event in Italy, BMW has revealed the BMW Zagato Coupe concept creation. It’s based on the regular Z4, only it wears a stunning Zagato-formed body. 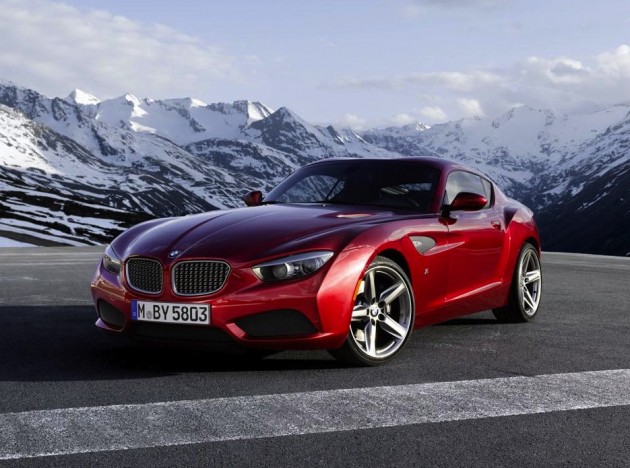 Designed and built as a co-development project, the Italian coachbuilder formed the body and design character. It features a very dominate and pronounced front end, with new front guards blending in to the puffier ‘cheekbones’ in the bumper bar.

At the back the BMW Zagato Coupe showcases prominent rear haunches, a clean-cut rear lip spoiler, and a swept up rear diffuser section. Following Zagato tradition, the roof also gets the double bubble treatment, with two domes bulging above the seating positions inside.

All panels have been handcrafted and are made of aluminium, and painted in a bespoke Rosso Vivace paint colour. The whole theme of the concept follows Zagato’s ‘V-Max’ philosophy, focused around an aero body for high speeds. Dr Andrea Zagato, third-generation founder, recently said,

“Zagato has always provided its customers with ready-to-drive cars which can be sent into action on the road or race track without further ado – and the BMW Zagato Coupe fits the same template.”

As for performance, BMW hasn’t mentioned specific details, however, when describing the bonnet design the company says, “A pair of air intakes integrated into the bonnet send extra supplies of air into the engine compartment and highlight the presence of the high-performance engine beneath”.

Overall, you have to admit, it looks decidedly sexy from every angle. Click play on the video below for more details.