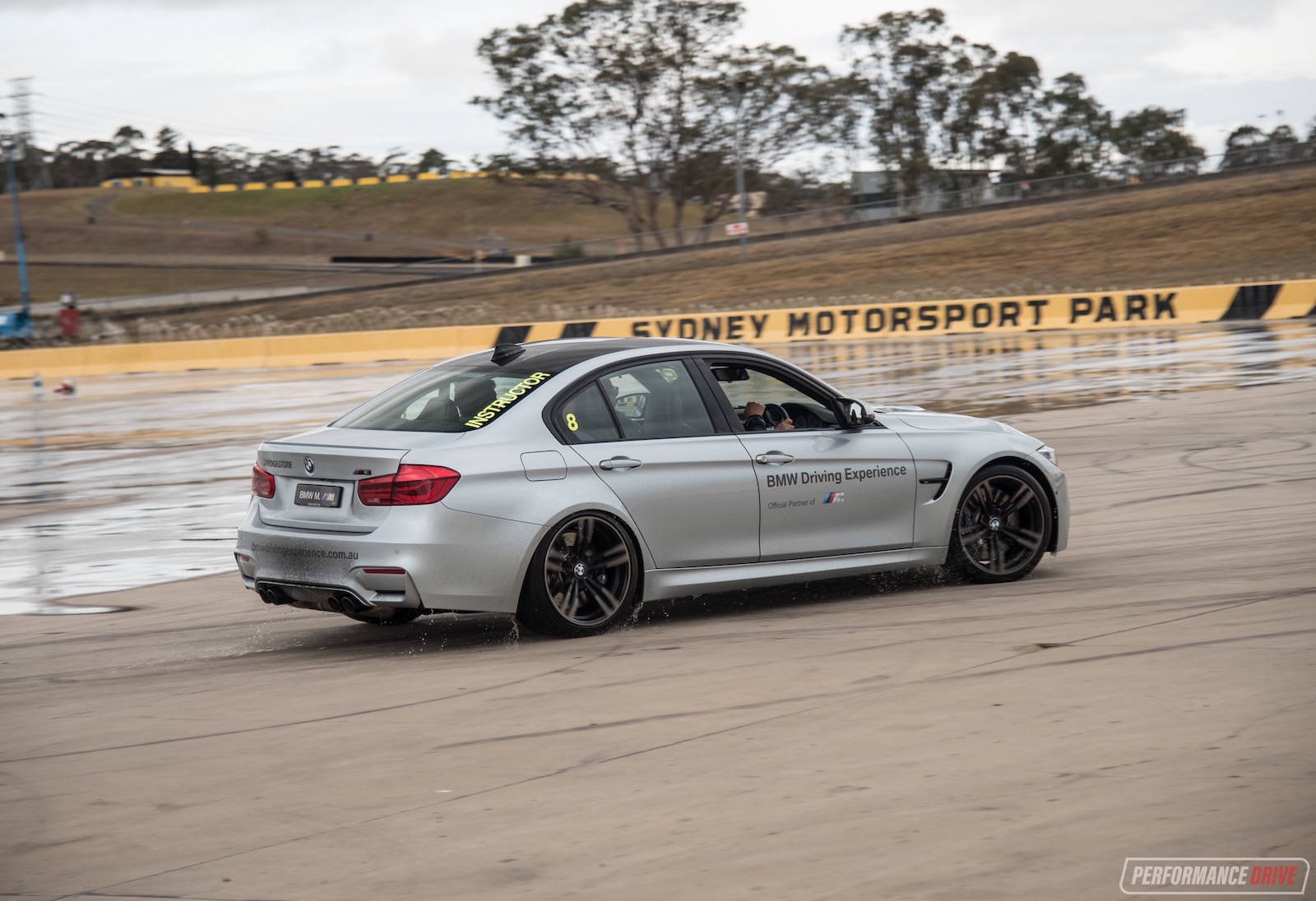 Buying from a premium car brand not only gives you access to a more luxurious and perhaps more uplifting drive experience, it also gets you access to various perks and special invitations. We recently had the privilege of enjoying one of such perks; an invitation to the BMW Driving Experience at Sydney Motorsport Park. 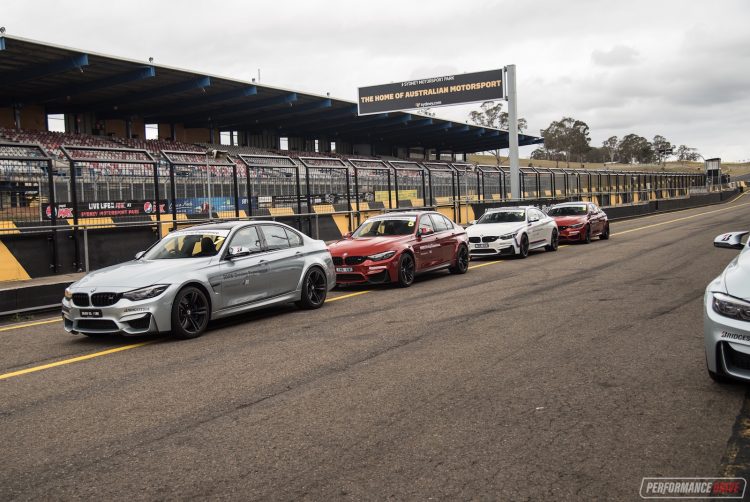 BMW has been putting together driving experience events and driving courses for 20 years now. And in Australia, it’s said to be one of the most comprehensive courses outside Europe. In fact, BMW HQ has apparently been recommending the Australian driving events to other countries as a template to follow. So, how it is?

We took part in one recently, following a purchase of an X3 30d from our friends at BMW Sydney. We should highlight at this point that this was not a media event and we weren’t paid any royalties to cover it. This is simply a real-world impression of the experience, just because we thought it was cool. 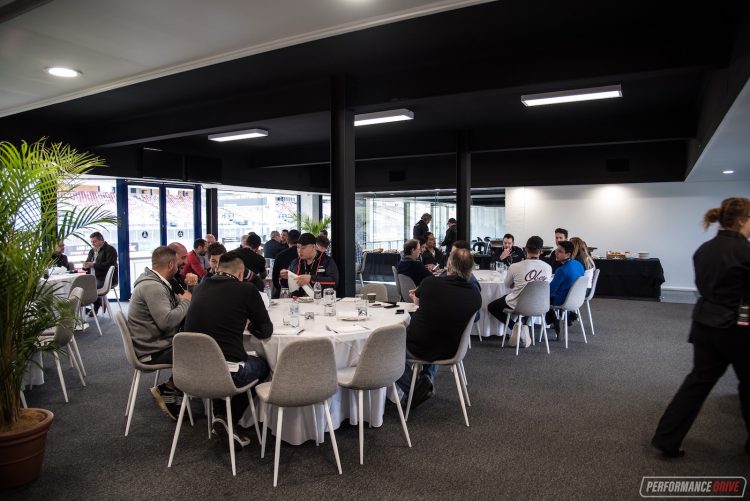 The half-day session includes lunch. And since we were in the second group, lunch was served on arrival. It’s not just a bunch of generic sandwiches either (which would have been fine anyway). The team puts on a full buffet and dessert, with coffee and drinks on call all afternoon.

After this it’s into the drivers’ briefing. Even if you think you know everything about driving (as we all do), the instructors provide an insightful and entertaining rundown of firstly how to best position yourself in the car, and then how to work the controls. 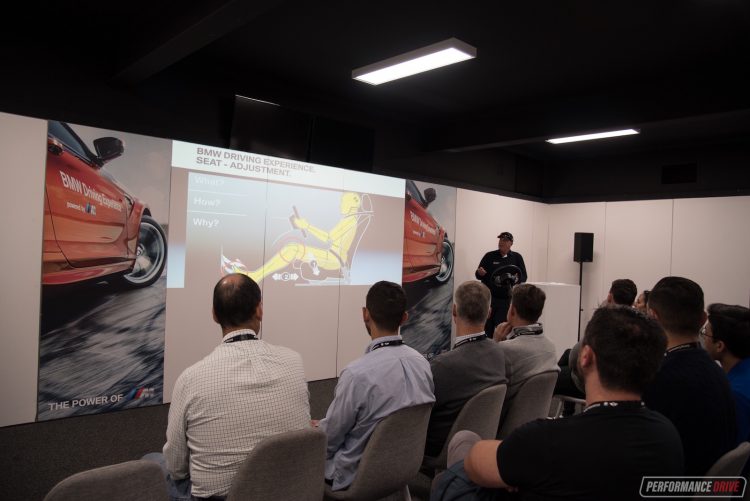 Things like the ‘racing line’ are explained in a very easy-to-understand manner, and a bit about what not to do on the track is also covered off. We found this part to be quite helpful actually, as it points out and helps you become more aware of potential bad habits that you might be carrying with you on the road. But it’s not a lecture; do this and do that. It’s all about making you aware of what is known to work best, and what is known to cause problems. 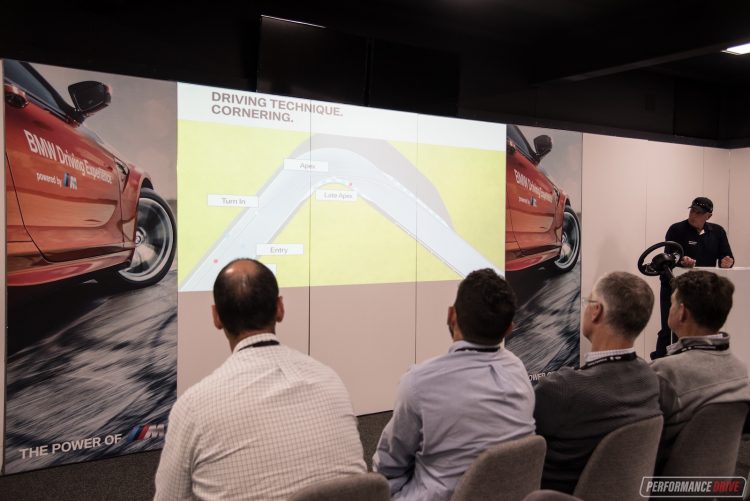 The rest of the afternoon is split up into two group sessions, including one that gets you into the driver’s seat of an M3/M4 and M240i, and then another session that’s all about the wet skid pan in a JCW MINI. Our group hit the big track first, piloting the M4 around the circuit in a group of four vehicles. For safety reasons you are under the instructor’s supervision. They drive the lead car, but they are very good at gauging the three following drivers’ skill level.

During our stint we had Alexi Falson, along with PD’s chief test driver Danyal Erkin (actually just a good mate who has been helping us with driving photos since we started PD in 2011), and then yours truly. With us three, the instructor could see that we were all friends and that we probably knew a little bit about driving. He set a cracking pace for us to follow. After around seven or eight laps, including some in the M240i, we jumped out and couldn’t stop talking about it; which car was best; what part of the track was the most fun; the max speed we hit. All very useful topics to discuss at the pub that evening. 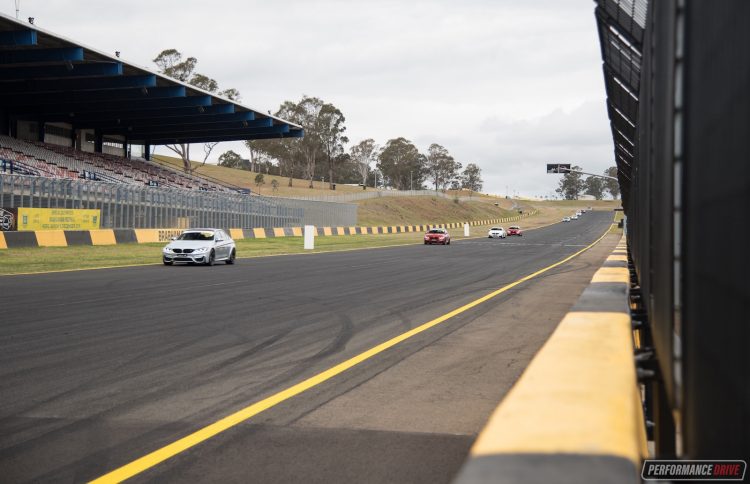 But the good thing is even if you don’t know the track or if you feel a bit intimidated by it all, the instructors have an incredible ability to read your behaviour and provide all the help you need, and at a pace you feel comfortable with. Above all though, you walk away feeling like you had a great taste of the car’s performance. And that’s what it’s all about.

At the end of it the instructors take everyone around for a full-speed, tyre-smoking hot lap in the M3. Even if you’ve done stuff like this before, it’ll blow your mind just how well the M3 handles. I’ve driven around the Nurburgring in the current M3 in around 8 minutes, but the hot lap at Sydney Motorsport Park, mostly sideways, is one of the most thrilling in-car experiences I have ever experienced. 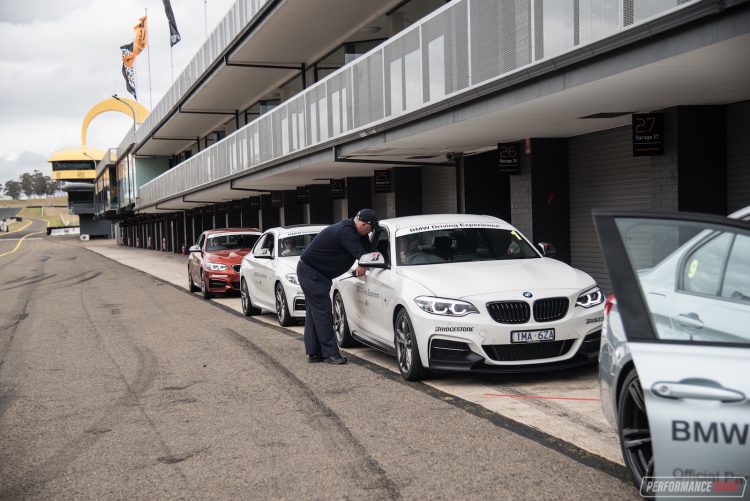 After this it’s time for afternoon tea. You’re presented with some sweet stuff that you know you probably shouldn’t eat except you do because it tastes so good, along with a caffeine top up. This gives you a chance to take in everything that you’ve just done and to have a think about some of the areas of driving that you could improve on, and areas that you were surprisingly impressed by. 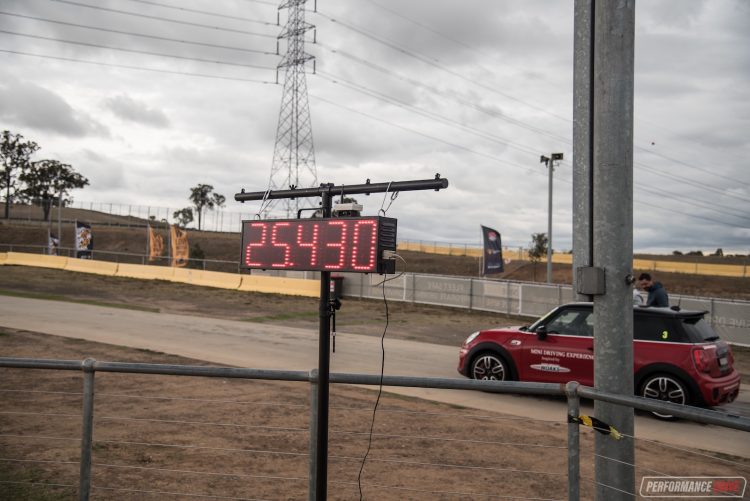 Over at the skid pan it’s all down to your racing spirit. A bespoke course marked out with cones is laid out in front of you (also known as a gymkhana course), and everyone has a go at setting the quickest time of the day. It’s properly timed too with sensors and accurate timing gear, recording from the moment the car moves past the start line to the point the car goes past the finish line and comes to a dead stop.

But don’t worry if you don’t know the layout, the instructor takes you around in an M3, twice. The first lap is a sighting lap at a normal speed. The second lap is a tail-out blast with more sideways action than a Ken Block video. It amazes you just how much grip the car has in wet conditions, even when sliding. It’s insane. 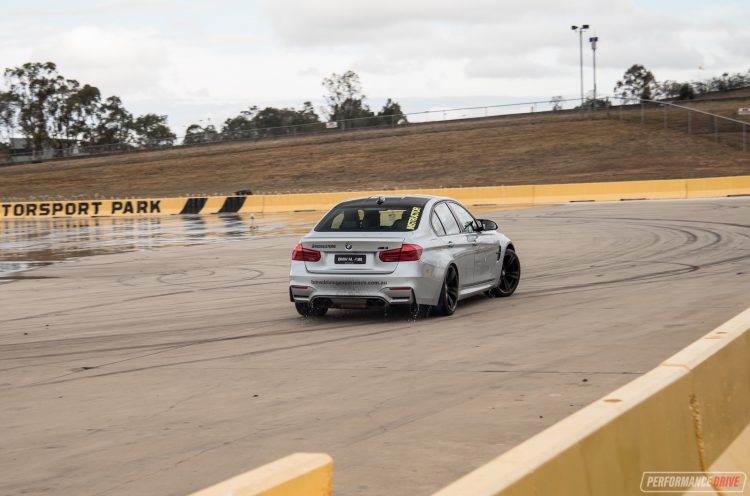 You’re given a MINI JCW, automatic, thankfully, as it’s just too small a circuit to worry about shifting gears. And you get around five or six attempts. On the first attempt I recorded a 17-point-something second time. At this stage we knew the quickest time of the day was 16.5 seconds from the earlier groups. So, I had to fine-tune it. In between your attempts you’re just thinking about how you can shave factions of a second off your time.

Do you leave it in auto or use the manual mode? Do you apply an aggressive driving style or just be as smooth as you can? Do you slam the brakes and rely on the ABS to pull you up to a stop, or do you gradually apply pressure for a smoother stop? All of these thoughts are racing around your head. And in our case, us three were keeping our cards close to our chest in regards to our tactics. 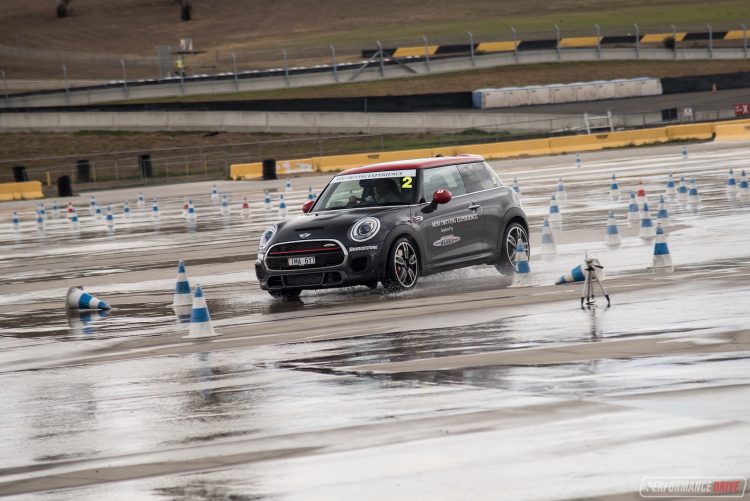 By the fourth and fifth attempt, my time was dipping into 16 seconds, but I still wasn’t convinced I was extracting the best out of the car, and taking on the best driving style. My last run ended up being 16.8-something, which ended up being good enough for third spot for the day. Taking home first place was none-other-than our test driver Danyal. Good on him.

What was the prize? Apart from bragging rights all the way home, he was given a BMW M2 for 24 hours – as far as I know the prizes change from time to time, so if you do attend one of these events in the future, please don’t blame us if this isn’t offered as the prize on your day. 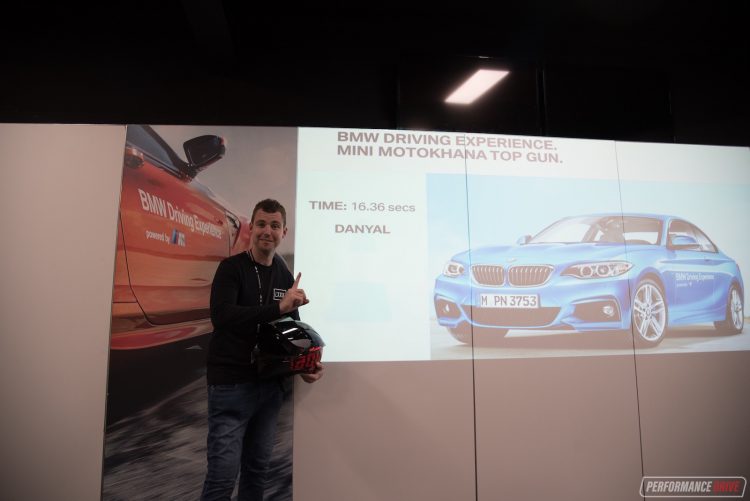 What a great event. Sure, going to work and sitting in the office behind the computer screen can be enjoyable. But if you get the opportunity to head out to one of these BMW Driving Experience days, we thoroughly recommend it. And yes, Danyal still hasn’t let us forget that he’s the fastest.