Another tuner has come up with a package for the new BMW 1 Series M Coupe. It’s called the Manhart Racing MH1 Biturbo package and it brings more engine power and some aerodynamic revisions. 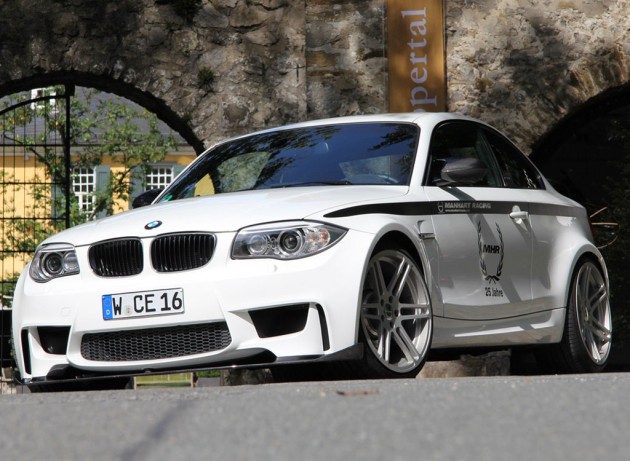 Many tuners have had a go at the new BMW 1 Series M Coupe, but this Manhart Racing MH1 Biturbo is one of the most powerful of the tunes out there. The kit includes a new exhaust system with stainless steel silencers along with an ECU tune, taking power levels from the standard 250kW to 310kW.

The new BMW 1 Series M Coupe is already said to be an absolute cracker of a car, with an extra 60kW on hand, one can only imagine what a little tail-happy bag of fun the Manhart MH1 Biturbo would be.

Keeping up a level of show with its go is a carbon fibre bodykit. It comprises of a low carbon front spoiler to improve airflow and a chunky carbon fibre rear diffuser. There’s also carbon fibre side mirror covers.

As for the wheels, these are upgraded to Concave One lightweight forged items measuring 9 x 20 inches on the front and 10.5 x 20 on the rear. Planting these firmly on the tarmac is Manhart’s coilover suspension kit.

We wonder what is the ultimate kit for the new BMW 1 M so far? We’ll keep our eyes peeled for a full 1 M tuning comparison and keep you updated.

Check out other BMW 1 Series M Coupe tuning kits below and tell us what you think is the best: