It has been reported that BMW is working on a larger hatch variant of the new 1 Series that most assumed would be called the 1 Series Gran Turismo, falling in line with other BMWs in the showroom. A concept version has now been revealed called the BMW 1 Series Active Sports Tourer. 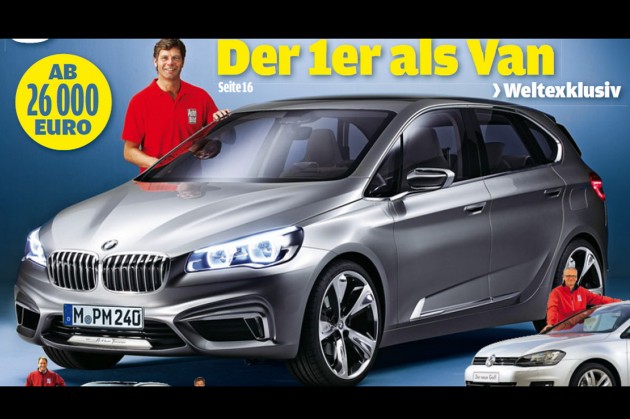 The new concept is a mini MPV based on the 1 Series, giving us a preview of what to expect from the company in the coming years. It will be BMW’s first attempt at the MPV market segment.

This image was captured on the cover of Germany’s upcoming issue of Auto Bild magazine. It’s understood the publication gained an inclusive shoot with the car for the new issue.

Little is known about the Active Sports Tourer at this stage, other than the fact that it will spawn a production car. Reports say it features a front-wheel drive layout underneath, which separates it from the current crop of 1 Series models which are all rear-wheel drive.

The concept also shows off a smart new design for BMW, particularly at the front. The grille and headlights appear to be an extension of BMW’s latest design language, with pronounced kidney grilles and a set of sharply-styled intake mouths below.

More details will be released in the coming weeks at the 2012 Paris Motor Show, starting September 29.