In the ongoing fight to improve efficiency and reduce fuel consumption, BMW has unveiled its new 1.5-litre TwinPower turbo three-cylinder engine line. The new engine family will come in a range of tunes, including turbo petrol and turbo diesel forms. 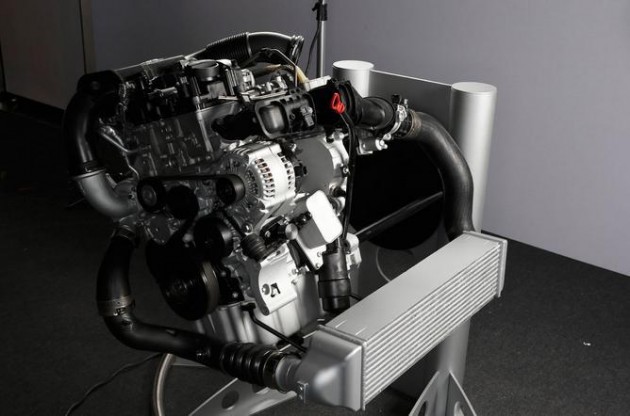 Despite using a measly three cylinders of combustion, the new engines are powerful little buggers. For the petrol lineup, power outputs are set to range from 90kW and up to 165kW. Torque is also impressive, ranging from 180Nm to 240Nm.

Part of the reason these engines offer such great specific power outputs – kW/litre – is due to how the engines have been developed. BMW says that up to 60 per cent of the components and 40 per cent of the structure is shared from the company’s current lineup. Basically, it’s like having half of a BMW 335i engine.

For the diesel lineup, power outputs are set to span from 60kW and up to 135kW, while torque spreads from 225Nm and to 330Nm for the highest tune. In the highest tune at least, the three-banger almost offers the same power and torque as the current 320d 2.0-litre four cylinder.

The engines feature BMW’s latest Valvetronic variable valve timing, and BMW’s trademark ‘TwinPower’ turbocharging technology (variable geometry). These, as well as other technologies and the fact that it is lightweight due to the reduced size, will assist in keeping fuel consumption figures very low. Specific consumption figures are yet to be mentioned.

“The 1.5 litre BMW TwinPower Turbo engine enjoys significantly reduced fuel consumption by virtue of its low internal friction. Due to the long ignition intervals, the charge cycle can be particularly well adapted to suit the needs of the driver, providing a high “low end torque”, as well as a rapid response.”

In terms of its smoothness, BMW says the engines share a number of common characteristics with its six-cylinder lineup, and come with a balance shaft and a torsional vibration damper.

In BMW spirit, the pokey engines are set to offer a high-revving, punchy and vivacious soundtrack, accompanied by a quick-to-rev nature.