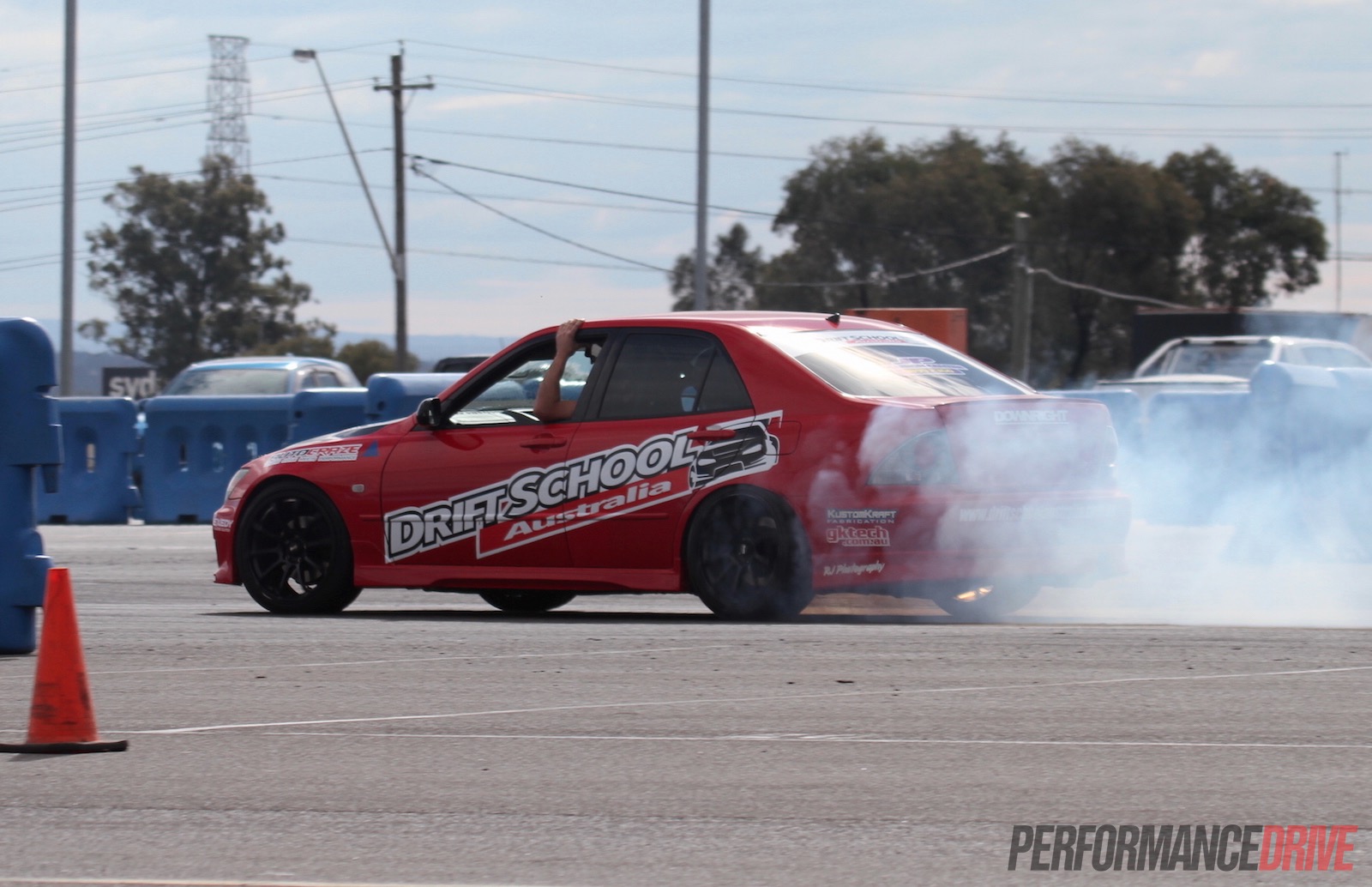 When we do have a performance car on review, we’re usually lucky enough to head out to the track and see what it’s all about. Eliminating the limitations of the public road and blasting around the track is a sure-fire way to kick your adrenal glands into overdrive. Taking a wide line into the turn, feeling the car pirouetting underneath you under hard braking, dancing on the limit of grip and accelerating out of the corner like you’ve stolen it is, in my opinion at least, one of the most heart pounding experiences you can have in a car. 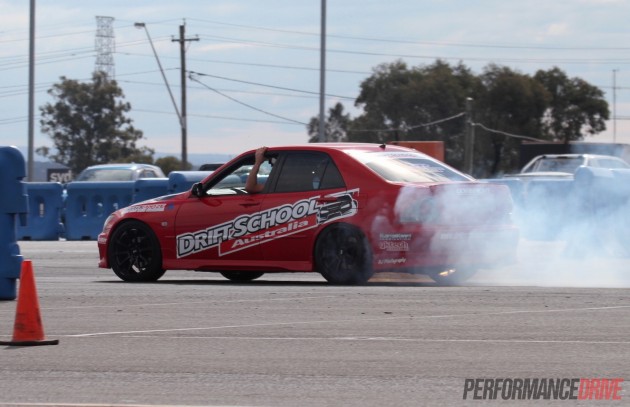 Or should I say, was, one of the most exhilarating experiences. For you see, I’ve danced with the devil that is drifting, and to spare you all the clichés, I’m hooked.

Drifting, as I’m positive you all know, is a completely different bag of cheese to regular time trial track driving. While the line you take through a corner is relatively the same, you hit the apex with your car pointing in a completely different direction, in total control, with an engine screaming, and tyres smoking more than Bob Marley in his prime. You can’t help but generate a stupendously big smile.

However, a question remained beckoning in my mind. Whether or not a day learning to drift is something reserved for only those of us with petrol pumping through our veins, or whether or not the average Joe or Joanne will learn some skills about car control that can translate back to the road. We’re here at the track to find out. 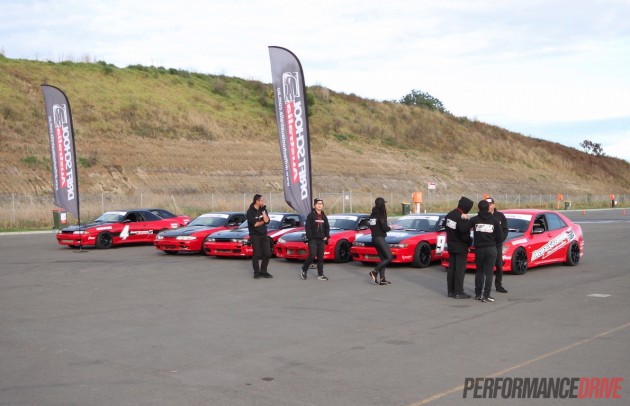 Now, meet Fernando Wiehrl, founder of Drift School Australia, which is based out at Eastern Creek in Sydney’s west. Fernando is a professional drifter, having taken out countless Australian Drifting Gran Prix championships, and top spots in the world-renowned D1 World All-Stars series. If you need proof of Fernando’s skills, check out the 3:10 mark on this clip below.

Acting as Drift School Australia’s director and head instructor, he gives myself and the others around me the introductory briefing. There is a real spread in the demographic taking part, with a mix of men and women, teenagers to 50-somethings all bearing the same nervous grin. The location is a massive expanse of tarmac, nestled between Sydney’s Eastern Creek Raceway (now called Sydney Motorsport Park), and the Sydney Dragway. There are two sections, one cordoned off with a kidney-shaped circuit for the pros to show off their skills and take customers on thrill rides, and a more than comfortably large area for us rookies to spin out in. The light posts have thankfully been saved for the pros to avoid.

He, and the rest of his team, have assembled in front the fleet of 12 cars, all of which we were able to get a taste of. R32 and 33 Skylines, S13, 14 and 15 Sylvias, and 180SXs just to name a few. The format of the day was six separate drills designed to give even the most inexperienced drivers an understanding of car control. The next drill would take what you’ve learnt from the previous exercises and build on that. When your name is called, you jump into the passenger seat with one of the instructors, where they run you through the motions, and perform that drill for you. Then before you know it you’re pulling away with that whoosh of a turbo to tackle it yourself.

The first and fairly straight-forward drill is to get up to speed, pull the handbrake and finish on a 90-degree angle; understanding the first stages of initiating a drift. I was placed lower down on the list, meaning I watched a lot of the other drifters-for-the-day spin in their first attempt, but nail it before their five-attempt limit was up. Despite some nerves, my attempt went without a hitch and we were onto the Homer Simpson drill… Donuts.

Have the car idling with full opposite lock, floor it, drop the clutch, let go of the wheel for a second, on and off the throttle and away you go. The massive skidpan ensured that getting the derrière of the car out was much more accessible, but controlling the amount of counter-steering is still very much all up to you. My instructor for this was Lani Guerreiro, and I wanted to make her dizzy… I completed the drill but failed at the latter.

The next activity starts to really test your automotive repertoire, with the challenge of a figure 8 around two cones. My first attempt swiftly eliminated my bulging Ken Block aspirations, as too many others in the course. Getting around the mark with just the right angle to floor it into the next loop proved a lot more technical than my foot-to-the-floor approach. Aynsley Bezuidenhout, DSA student-turned-instructor’s hand signals for steering angle, and understanding the angle of counter-steer necessary soon had me looping around both cones.

The next activity was our first attempt at taming the bull. Get up to speed, clutch-in, pull the handbrake, unsteady the rear of the car with the clutch release and power out of a bona fide left hand drift. Easy, right? Well it seemed easy enough watching my instructor Matty Hill. In reality, this is where I, and I anticipate a lot of others, will hit the steepest of learning curves. After all, Fernando and his team are incredible drivers and instructors, but they can’t change the laws of the universe when it comes to the fact that only practice makes perfect. My first attempts had me rushing everything… Absolutely everything. Same too for the next few attempts, but after a few deep exhales, it started to click.

Now for the right-hand drift, which my instructor, Ben Toyer, told me is easier for some unexplained reason. I can indeed testify for this, however it might have been the fact I was just adding on to what I had learnt, and for the most part, failed on most of my first attempts. Things started feeling more natural, the whole working with the machine, rather than against it comes to mind. I digress, I and most of the other students were finishing this activity with the car on full opposite lock, and exiting the car with an equally large grin.

And cue the final and most challenging activity, the linked drift. Two yanks of the handbrake to get the car’s bum swinging in two directions. I watched Scott Porter, whom I suspect is one of the youngest yet bravest instructors from the passenger seat, and knew this was not going to be a cake-walk. I soon proved this theory with a fine display of how to once again rush every technique they had thrown at me. We looped back, Scott told me to chill, he told me stories about when he gets a bit too worked up drifting competitively, the end result is more often than not a close-up for the side barrier. I definitely needed to. My last attempt had me completing the activity at maybe 80 per cent, with my initial handbrake turn in looking a little sloppy, but a very over-jealous amount of over-steer on the final curve. I was stoked.

Before the day was over it was time to get a feel of how fully-fledged drifters roll. Part of the Masterclass package is a ‘thrill ride’, where professional drifters slide around the small circuit in pairs and threes. Compared with my efforts earlier in the day, it was like weaning a baby from breast milk to bourbon, and I was sitting there in awe of Jim Turner’s skills. He is actually a part-time scientist, currently working on a project of the fastest and most efficient method of converting solid rubber into smoke. The results amazed me. 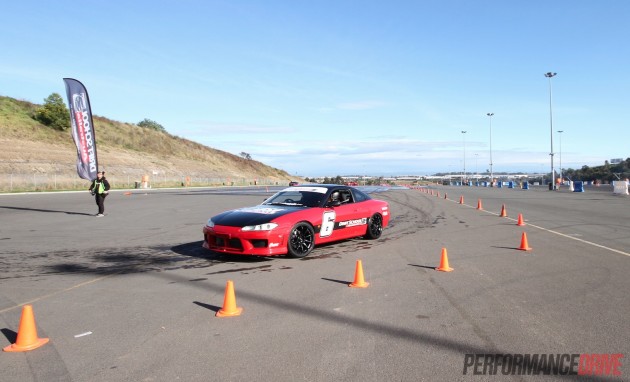 Now then, that question I put forward at the start of this article. Is the full-day Masterclass just for pure rev-heads? Put quite simply, no. There’s a range of invaluable skills that this course will teach you, or your son who just got his P-plates, or your daughter who is a bit intimidated by the open road. If you’re in a situation where your car suddenly loses traction, you’re at a massive advantage if you’ve had hours on a skidpan getting a feel for car control and counter-steering techniques. When I put this question to Fernando at the end of the day, he told me a story of a guy who had completed the Masterclass, who also enjoyed track time out at Eastern Creek raceway. He was a little overzealous into the curve, and was smack-bang in a world of oversteer, with a barricade fast approaching. Not only did this save his car, it could have also saved injuries, even death.

Parents out there, if you’re a bit apprehensive of the thought of your L-plater soon to graduate to their P’s being on the open road, Drift School is one of those things that will teach them a lot, without them actually knowing they’re learning… which is always such a drag. By the end of the day, you’ll be craving more, and DSA will welcome you back time and time again to feed your newfound addiction. And best of all, it’s extremely fun.

Having time in a closed and controlled environment in a car is one of those things that could, even should, be part of the licensing process here in Australia. I have Swedish friends who explained that activities like these are actually compulsory in order to get your full licence over there. So in that sense, it’s hard to ignore the real-world applications that Fernando and his team offer at Drift School Australia.

Check out the video below we put together for more insight, and head over to the Drift School Australia website to book your class.