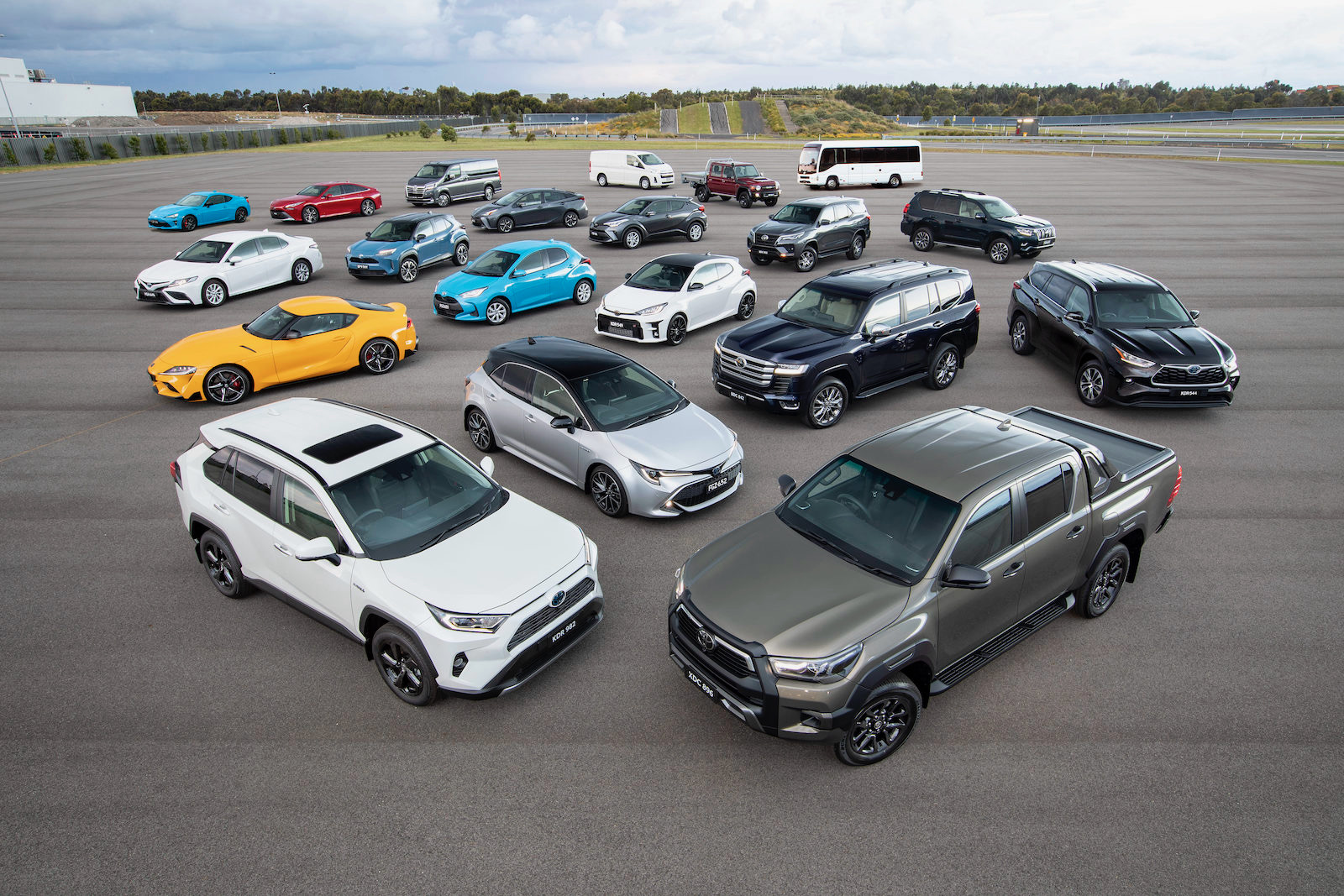 Australian new vehicle registration figures for July have been released, in the form of VFACTS, and they show a slight increase in overall sales compared with the same month last year. 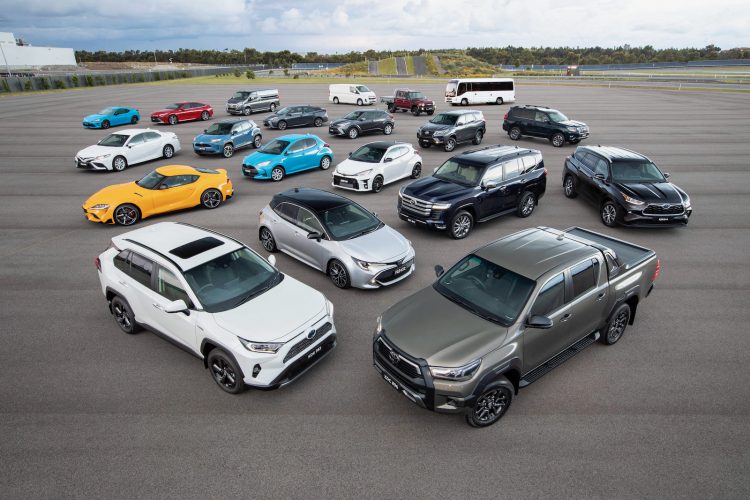 One area that is clearly gaining interest is electric vehicles, with sales booming 276.6 per cent year-to-date (YTD). During July, 609 new electric vehicles were registered, adding to a seven-month tally of 10,289. Plug-in hybrid sales are up 99.4 per cent across the first seven months of the year, with 3519 sales, and 578 for the month of July. Meanwhile hybrid sales are up 14.4 per cent YTD, with 47,835 units, and 6779 for the month.

Obviously with more and more EVs being introduced to the market the sales figures are naturally going to rise. But, we notice petrol vehicle sales are down 12.3 per cent YTD while diesel sales are down 0.6 per cent over the same period.

Overall, 84,461 new vehicles were registered in July this year (we’ll call them sales), which is up 0.4 per cent compared with last July. Year-to-date, though, the numbers are down 4.5 per cent. Chief executive of the Federal Chamber of Automotive Industries (the body that compiles VFACTS), Tony Weber, said:

“Vehicle and component manufacturing operations remain affected by plant shutdowns caused by Covid-19. Logistics, including shipping, remain unpredictable. While small growth on the same month in 2021 is encouraging, we do not expect the supply of vehicles to Australia to stabilise in the near future. Once again Australia is following the global trend of demand for new vehicles exceeding supply.”

Toyota remains Australia’s favourite car brand, with the Japanese auto giant contributing 19,565 sales to that outright figure above. That’s up 10.9 per cent on last July, and translates to a YTD increase of 3.2 per cent. That’s pretty impressive considering it has had to wind back production capacity due to ongoing supply constraints, like most manufacturers.

Coming in second position for the month, Mazda managed to climb back from its fourth-place standing in June. It is usually in second place but has been falling behind in recent months. Hyundai and Kia were extremely close in July, with the parent brand just edging out in front. Year-to-date sales are down 16.7 per cent for Mazda, while Hyundai is up 2.9 per cent and Kia is up 7.0 per cent.

In other areas of the top 10, we see Subaru moved from ninth in June to eighth, and Isuzu moved up one from 10th to ninth. See below for the top 10 best-selling vehicle brands in Australia during July 2022:

Mercedes-Benz remains the front-running premium brand, followed by BMW and then Audi. And that’s the order they fall in terms of YTD performance as well, with Mercedes down 8.6 per cent, BMW down 13.6 per cent, and Audi down 25.4 per cent for the first seven months of the year.

Further down the top 10 list, Genesis jumps into 10th spot for the month, with Tesla out of the list reporting just 4 sales in July. It seems Tesla numbers are very volatile, since the company starting including figures in VFACTS earlier this year.

All brands in the top 10 are seeing drops compared with the previous month of June, with Volvo and Porsche numbers in particular seeing a sharp drop, pretty much halving. We suspect the ongoing chip and parts shortage plays a big part here, especially as luxury vehicles rely on more chips than regular models.

See below for the top 10 best-selling premium car brands in Australia during July 2022: 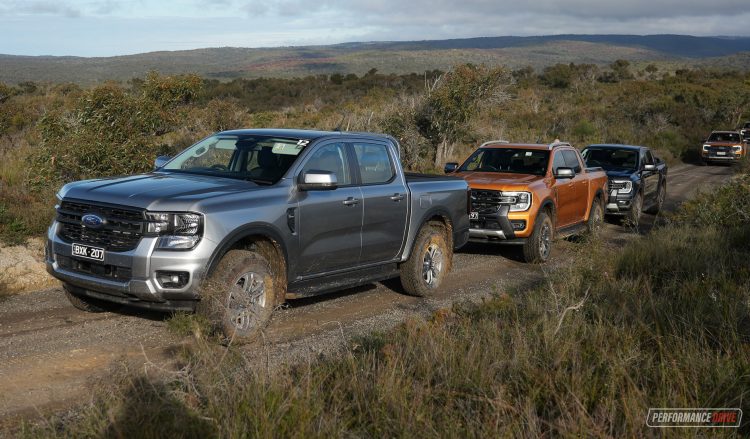 Although it couldn’t quite match its extraordinary effort of June, the Toyota HiLux thumped the sales charts in July. It reported 6441 units, which means it easily outsold its nearest competitors. However, we should start to see Ranger numbers increase soon thanks to the arrival of the next-gen model. But for July the figures were likely made up of the outgoing model. At least most of them anyway.

The Mazda CX-5 jumped back into the top 10 and straight into fourth spot, right behind its arch rival the Toyota RAV4, while the Kia Sportage and the Isuzu D-Max dropped back some spots from June, to eighth and 10th.  The top 10 best-selling vehicles in Australia during July 2022 were as follows:

Kicking off the segments, the Toyota Corolla remains in front, as suggested by being the only small car in the overall top 10 list above. The Hyundai i30 fell back a bit compared with June, but still holds onto second place here. The Mazda3 and Kia Cerato came as close as it gets, while the WRX outsold its humble sibling, the Impreza.

Total segment figures topped 6856 units for the month, which is down 16 per cent compared with July last year. Across YTD the numbers are down 21.8 per cent. See below for the top 10 best-selling small cars in Australia during July 2022: 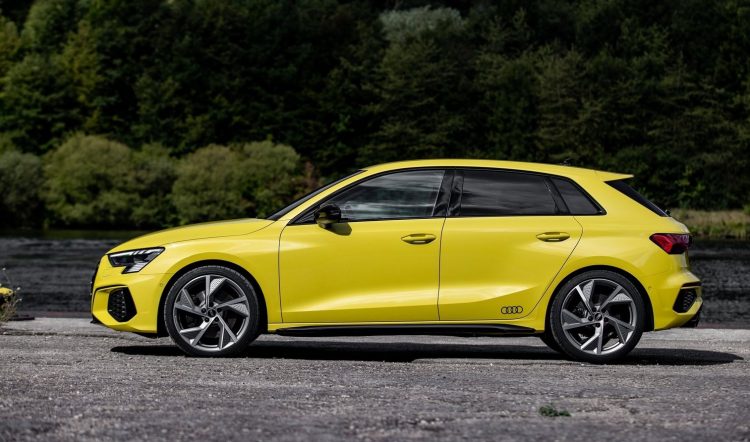 Luxury small cars were led by the Audi A3, interestingly. Perhaps as the latest model arrives. Sales are up a whopping 345.4 per cent YTD. This left the Mercedes A-Class, the usual top-seller, in second place.

This class reported 945 sales overall for the month, and that’s up 6.4 per cent on last July. Its YTD figure of 4833 units is down 29.3 per cent. See below for the top five best-selling vehicles in this segment during July 2022:

It might be a boring sedan but it’s definitely a commercial success for Toyota. Yep, the Camry is back into slogging its rivals by a big margin. Even if you combine the sales of all other models sold in this class you’d still end up with fewer units than what Toyota achieved with the Camry. Sales are up 32.7 per cent for the month for the Camry but down 13.3 per cent YTD.

Class figures topped 1444 units in July, which is down 2.5 per cent for the month and contributes to a decrease of 15.3 per cent for the first seven months of the year. See below for the top five best-selling vehicles in this class during July 2022:

Over in the premium sector, the Mercedes C-Class remains in front. All of the top five models saw a decent drop in figures compared with the previous month, including the favourite.

We notice the BMW 4 Series Gran Coupe jumped into the top five for the month, and the figure doesn’t include the i4 which is the electric version (8 sales in July). The Polestar 2 is still going quite strong, especially for a relatively new and unknown model in this class.

Segment figures reached 996 units in July, and that’s up 0.5 per cent compared with last July. Year-to-date sales are up a whopping 50.5 per cent. See below for the top five best-selling vehicles in this segment during July 2022: 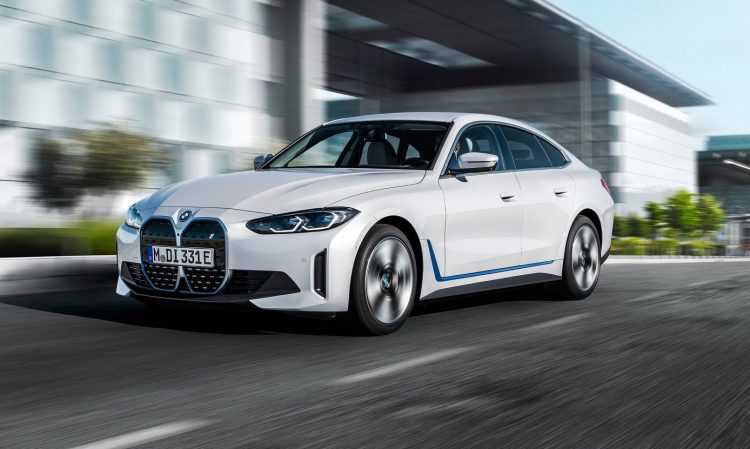 Sadly, this segment is dwindling and only just holding on. Segment figures topped just 170 units, made up of just two models. However, sales for the month were up 66.7 per cent compared with last July, and up 58.6 per cent YTD. The only vehicles listed in this class in VFACTS for July 2022 recorded the following figures:

The premium class isn’t doing much better, reporting 170 sales as well but that’s with 11 models in the fleet. The leader was the Porsche Taycan in July, impressive for quite a high-end and very expensive model. It just eclipsed the BMW 5 Series.

Class figures overall are down 12.4 per cent for the month, and down 36 per cent YTD. The top five best-selling vehicles in this segment during July 2022 were as follows: 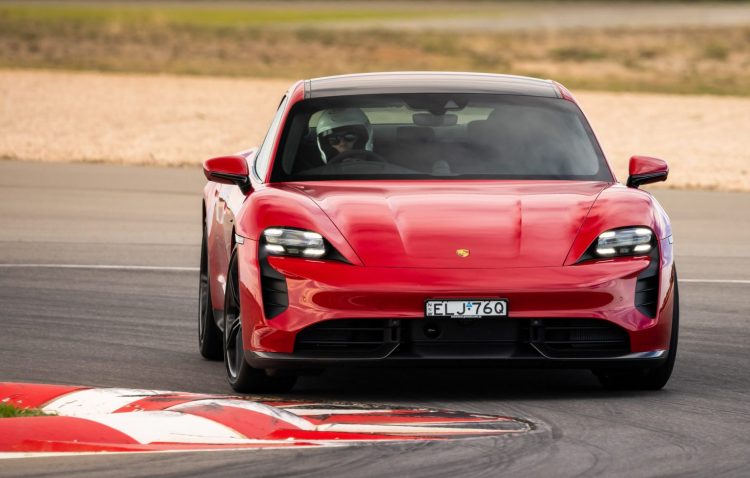 It looks like the Ford Mustang is back on form, following a decent month in June and now even better in July. It was the most popular sports car overall for the month, although, the Subaru BRZ was right behind it. The new Toyota GR86 twin is arriving soon so it will be interesting to see how it shakes up the segment as well.

Overall segment sales topped 418 units for the month. That’s up 49.8 per cent on last July, but YTD figures are down 36.3 per cent. The top five best-selling vehicles in this class during July 2022 were as follows:

The more premium sports cars were led by the BMW 4 Series in July, once again, with the Mercedes C-Class two-door not far behind. Surprisingly, the Chevrolet Corvette moved into third spot, despite being quite a niche and expensive model (in Australia) in comparison.

Total class sales hit 198 units for the month, which is down 27.7 per cent on last July, contributing to a 27.8 per cent decline in YTD sales. The top five best-selling models in this segment during July 2022 were as follows:

The Porsche 911 continues as the most popular high-end sports car, perhaps rightly so, easily crushing all competitors in this field. Sales for the iconic model are up 44.8 per cent YTD.

Class figures topped 88 units in July, down 8.3 per cent from last July. Meanwhile the YTD figure of 714 units is up 7.2 per cent. See below for the top five best-selling vehicles in this class during July 2022: 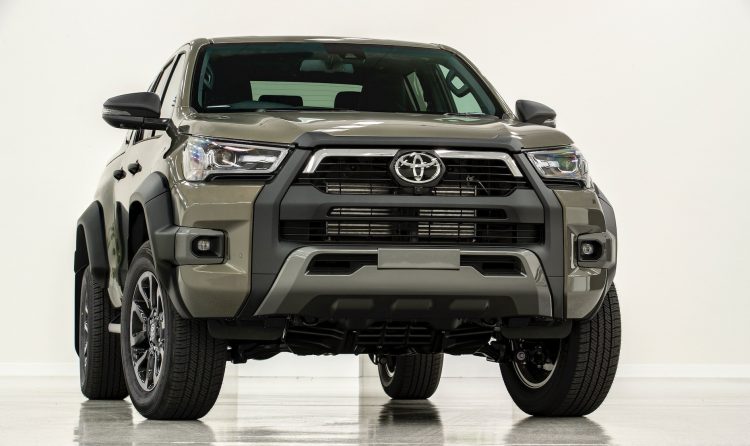 This segment will soon receive a shake-up, what with the next-gen Ford Ranger now hitting showrooms and soon Toyota will launch the updated HiLux. For now the numbers look pretty consistent and most models remain in the same positions as the previous month, except the Mazda BT-50 leap-frogged the GWM Ute to become fifth favourite.

See below for the sales results for 4×2 and 4×4 models combined (available in both driveline configurations) for July 2022:

Into the 4×4-exclusive ute class, and it’s no surprise the Toyota LandCruiser 70 Series continues as the favourite. The LDV T60 jumped into second spot, while further down the SsangYong Musso moved into fifth spot. See below for the top five best-selling vehicles in this segment during July 2022: 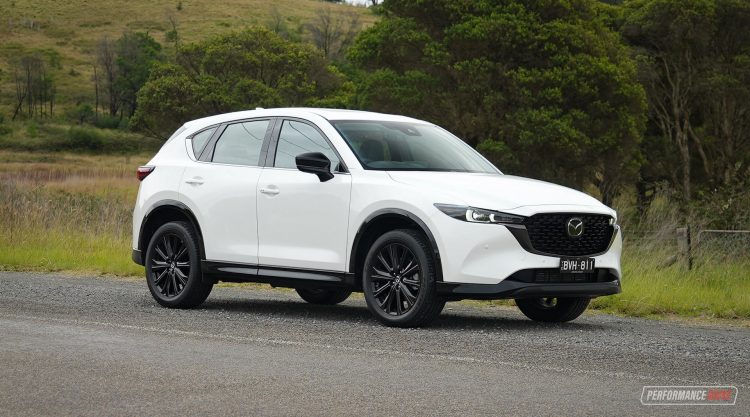 Lastly, the ever-popular SUVs. The Toyota RAV4 was the most popular SUV outright for the month, but the Mazda CX-5 and even the Hyundai Tucson were not far behind. The most popular premium SUV for the month was the Audi Q3, again. It’s quite often in top spot, although it is a bit of a quiet achiever.

See below for the top five best-selling SUVs in all segments during July 2022:

Total new vehicle sales in Australia in July 2022 were down on June 2022 figures. During July 2022, Australian consumers bought 84,461 vehicles according to VFACTS, as mentioned, compared with 99,974 in June. Overall sales for the month are up 0.4 per cent compared with July 2021, and down 4.5 per cent year-to-date.