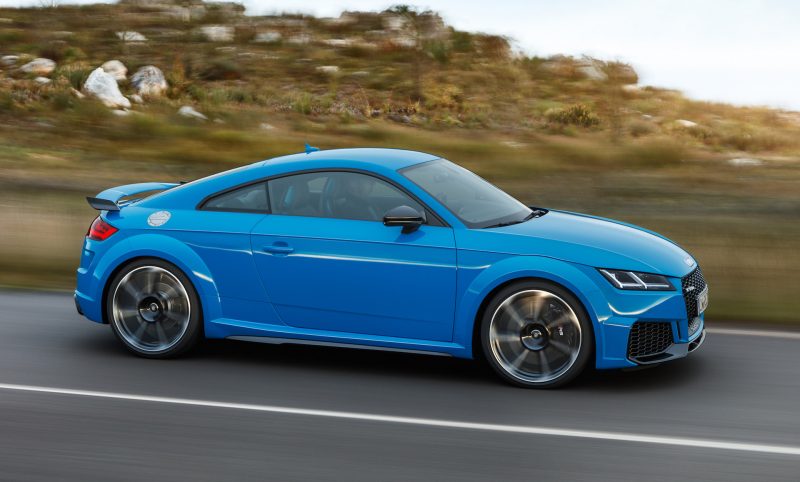 The Audi TT RS barks and roars its way back onto the Australian market, following a two-year hiatus. It features the latest version of the iconic five-cylinder turbo engine. It’s described – by Audi – as offering supercar performance but without the supercar price. And there is some truth to that given the 2.5-litre engine is kind of like half a Lamborghini Huracan V10 engine. It certainly sounds like it, with its distinctive five-cylinder wail.

More specifically, the engine is the latest tune featuring an aluminium crankcase, dual injection including direct and port, Audi valvelift technology, and a turbocharger running at 19.6psi. As a result, the unit develops a whopping 294kW at 7000rpm, and 480Nm between 1700-5850rpm. The outputs are carried over from the MY2018. Also carried over is the seven-speed dual-clutch S tronic auto transmission, and an RS-tuned quattro all-wheel drive system that offers a rear-axle-biased delivery in certain conditions. As you’d expect, this combo provides thrilling acceleration. Audi claims 0-100km/h comes up in just 3.7 seconds, which isn’t far off some supercars.

New for 2020 is a range of standard options which help boost value by over $6500. Inside, the instrument cluster showcases a 12.3-inch Audi virtual cockpit with RS-specific gauges (large tacho, g-force gauge, lap timer), while the MMI navigation plus system along with Android Auto and Apple CarPlay are also standard. Tunes are sent through a premium 680W, 12-speaker Bang & Olufsen stereo. “The iconic Audi 2.5-litre five-cylinder turbo is one of the most celebrated engines in motoring, and its combination of power and soundtrack provides a rare thrill for enthusiasts. Now with even more high-value features as standard, the Audi TT RS has never been more attractive.”

The new model is on sale in Australia now, and Audi says the first local deliveries are scheduled to commence from July. Prices for the latest TT range start from the following (excluding on-road costs):