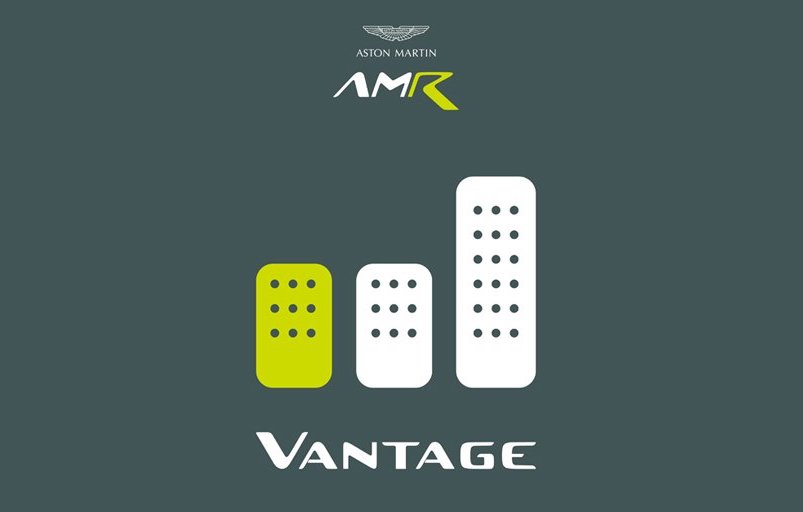 Yep, Aston Martin is kicking on with the manual transmission, releasing this teaser image ahead of the new option that will soon be available in the form of the Vantage AMR.

The teaser image is pretty blunt but also very clear. It simply shows three pedals in the traditional format, with a large accelerator pedal and two smaller pedals for the brake and clutch. This, of course, means the car has a manual transmission.

Aston Martin used Twitter to send out the teaser and incorporated the hashtag #VantageAMR. The AMR badge is currently applied to the DB11, and is the flagship variant of that car featuring enhanced aero treatment, exclusive trimmings, and increased engine power for its V12.

We’re guessing the same philosophy will be applied to the Vantage AMR. At the moment the Vantage comes with a 4.0-litre twin-turbo V8 producing 375kW and 685Nm. These outputs could easily be boosted. Boosted up to 450kW, in fact. As you may know the current Vantage engine is a Mercedes-AMG unit which is featured in cars ranging from the C 63 AMG S (375kW), and up to the new AMG GT 63 S 4-Door (470kW).

There is also the chance Aston Martin will revive the Vantage V12 layout. After all, the previous model generation was available with a V12 and a manual transmission. However, it used the old 5.9-litre naturally aspirated V12 that produced 421kW. Nowadays, Aston has a 5.2-litre twin-turbo V12 that develops up to 470kW.

With a manual transmission, even with 375kW, it should be a very exciting vehicle to drive. We’re not sure about 470kW, though. That might be a bit tricky to get off the line in a rush. But either way it will no doubt come in as the new flagship Vantage.

We won’t have to wait long to know all of the details. Aston Martin says the new model is “coming soon.”