The German Federal Department of Transport and the German Automobile Tuning Association (VDAT) have unveiled an ABT Audi R8 GT-R police car at the 2011 Essen Motor Show. The project was put together as part of the ‘Tune it! Safe!’ campaign. 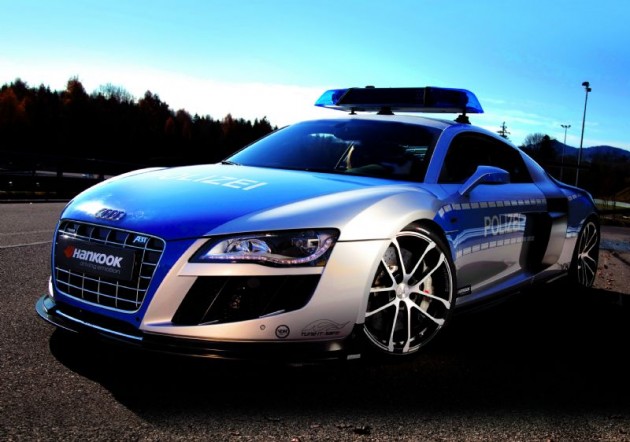 Made in conjunction with Audi and renowned Audi tuner ABT, the ABT Audi R8 GT-R police car is being slated as the fastest police car in the world. Featuring a 5.2-litre V10 producing a whopping 450kW of power, it’s pretty hard to argue.

In standard form, the Audi R8 V10 produces 386kW of power, but thanks to a dose of tuning from ABT, it’s now significantly more powerful – this is not the police car you want to be running from.

Not only is the ABT Audi R8 GT-R police car more powerful, it’s also lighter in weight. Various panels have been replaced with carbon fibre items, such as the bonnet, rear wing, interior door trims, and front and rear aprons. All up, 100kg is shaved from the Audi R8’s 1620kg mass (or 1525kg if it’s based on the Audi R8 GT).

Other features include a full ABT performance suspension kit with lower and stiffer springs, ABT wheels and a set of Hankook Ventus S1 evo tyres speed rated at 325km/h. The epic R8 will take part in the campaign from 2012.