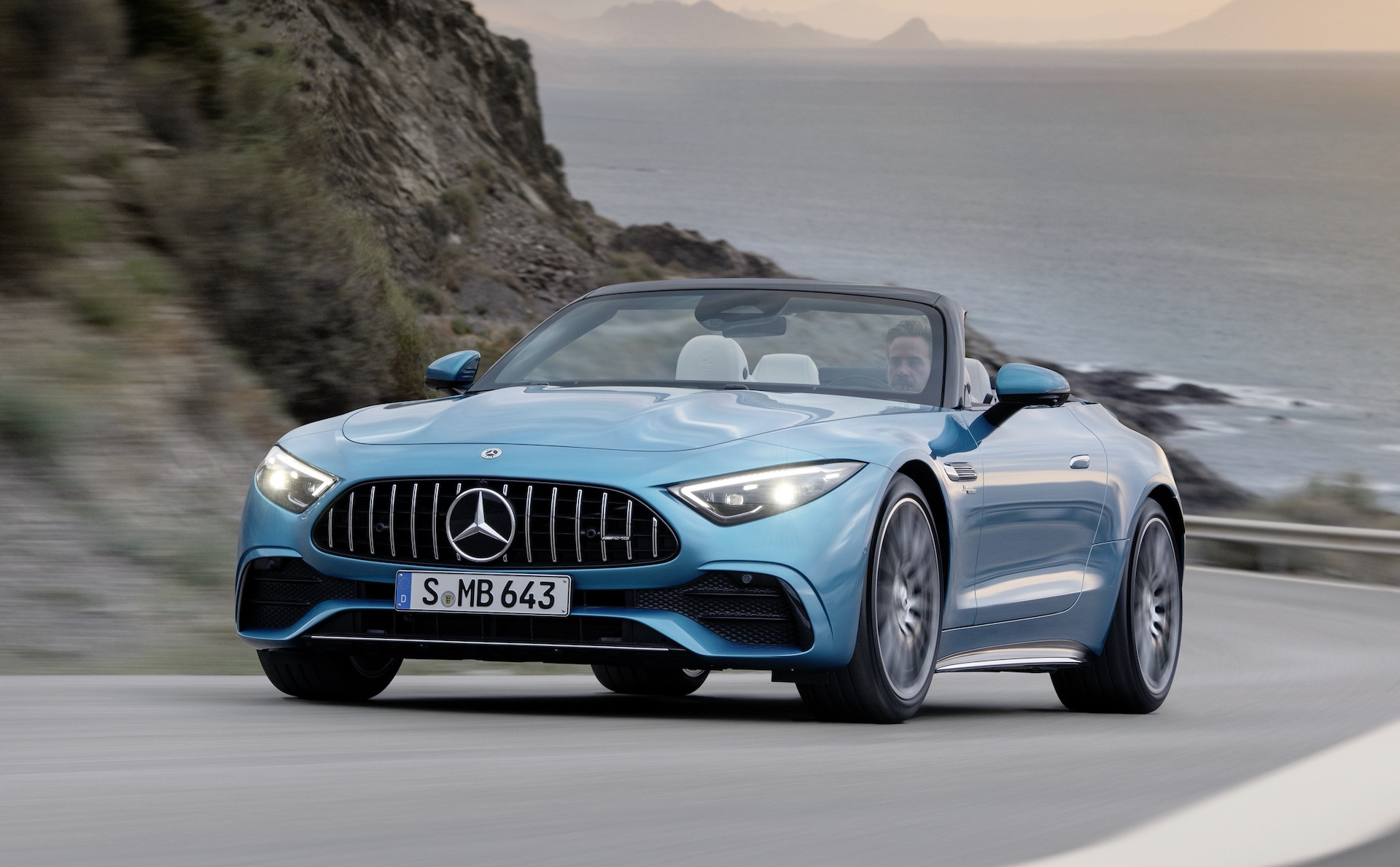 Following the initial debut of the all-new Mercedes-AMG SL in 55 and 63 V8 form, the German company has now unveiled a turbo four-cylinder entry model called the SL 43. 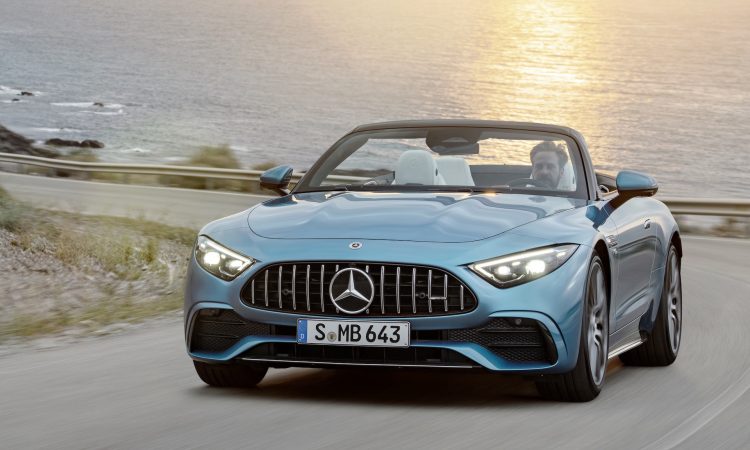 As previously confirmed the new SL is an AMG-only product this time around. There is no more conventional luxury model, in other words. All models feature a turbocharger and a new platform, with weight slashed by around 270kg compared with the predecessor.

The SL 43 comes powered by the M139 2.0-litre turbo four-cylinder engine, similar to the one found in the A 45 and GLA 45. It features a unique electric motor within the turbocharger, about 4cm thick, positioned between the turbine wheel and compressor wheel,

It helps the shaft connecting the two wheels spin around, essentially working as a kind of anti-lag system. The electric motor spools up the compressor wheel before exhaust gas is able to provide full pressure to the turbine wheel. Mercedes calls it an electric exhaust gas turbocharger, as the turbo relies not only on exhaust gas but artificial ‘gas’ to operate. 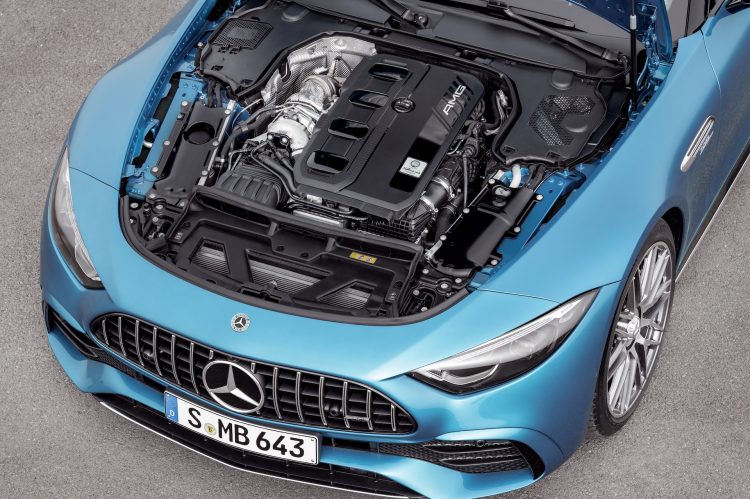 This is the same technology used in Formula 1 racing, and provides immediate response from idle for the driver. Since it is electronically controlled, the electric motor can come in and fill any gaps in the rev range to ensure optimum intake pressure is always supplied.

Maximum power for the engine is 280kW and torque peaks at 480Nm. These outputs might be down on the 310kW/500Nm offering in cars such as the A 45, however, this newer tune includes a mild-hybrid starter generator that can supply a further 10kW for short boosts.

All of that is sent through a nine-speed MCT automatic transmission – a first for the M139 engine – and into a rear-wheel drive system. Mercedes says the SL 43 can sprint from 0-100km/h in 4.9 seconds, which is pretty much perfect for a sporty and luxurious drop-top. The top speed is 275km/h. 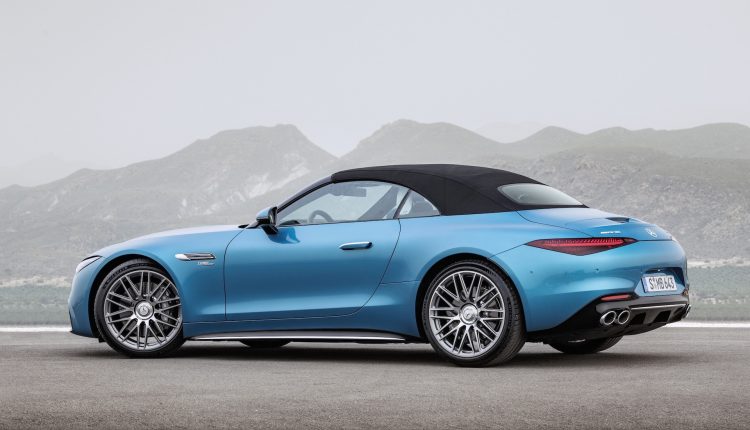 The new model is underpinned by a lightweight aluminium composite platform developed by AMG. Engineers have ensured the new layout provides 2+2 seating, which is a first for the SL-Class since 1989. Mercedes says the rear seats increase the overall versatility of the sports car, accommodating passengers of up to 1.5m tall.

Inside is presented beautifully with a combination of analogue geometry and digital interfaces. Mercedes calls it ‘hyperanalogue’. There’s a fully digital instrument cluster within a 3D visor, and an MBUX multimedia screen with a variety of different display modes and styles. 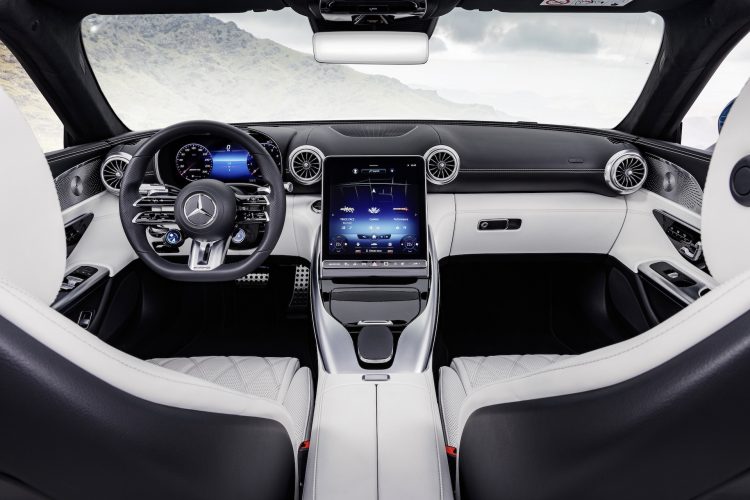 The cabin is then concealed by an electric soft-top roof providing a 21kg weight saving over the previous metal roof. The Z-fold mechanism also saves space and helps with neater packaging when the roof is down. Operation takes around 15 seconds and it can be done at speeds of up to 60km/h.

Production of the new model will commence later this year, with an Australian introduction expected towards the end of the year.