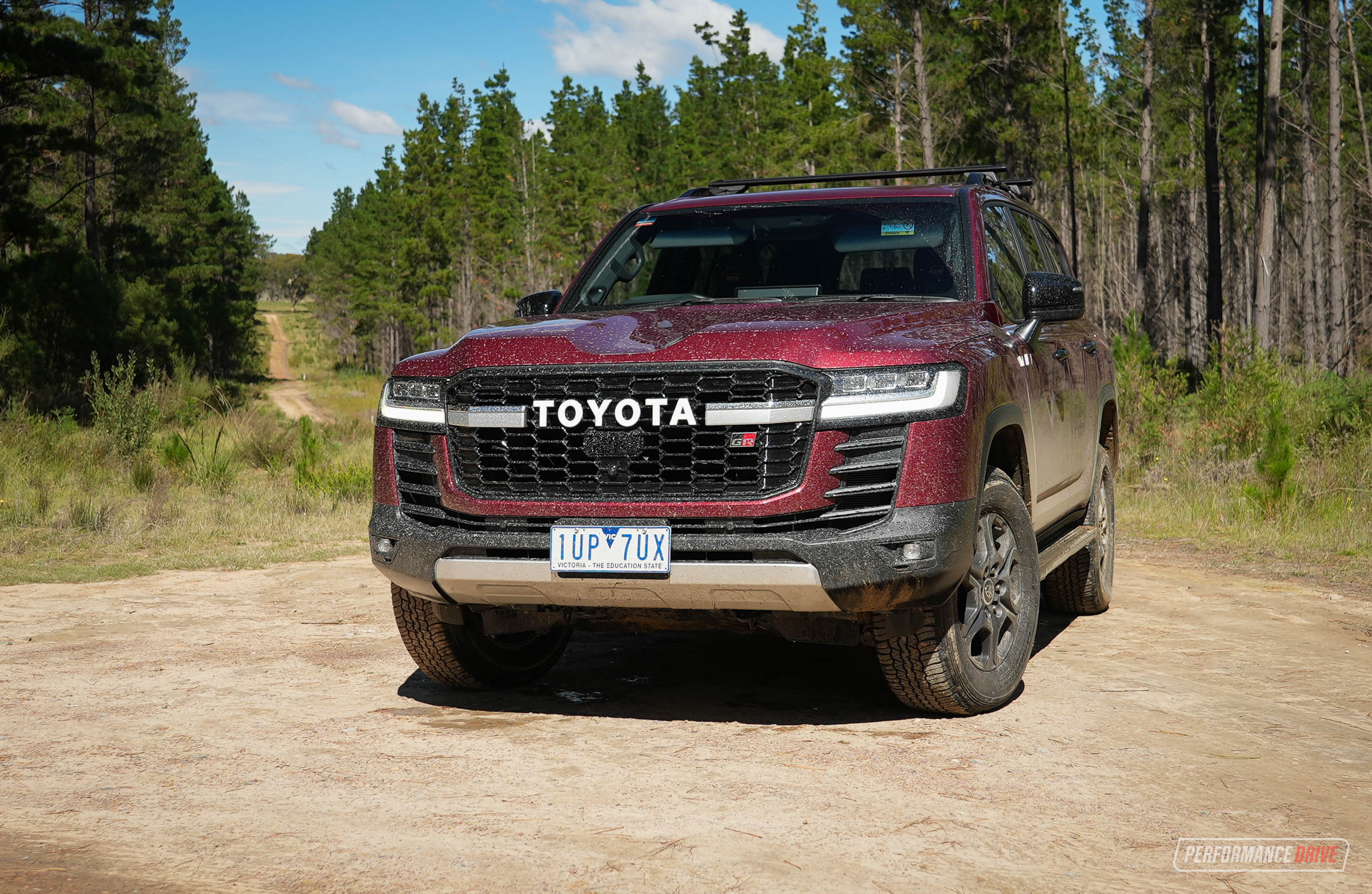 Welcome to the 2022 Toyota LandCruiser GR Sport. This is the first GR Sport variant ever offered for the LandCruiser nameplate, and it’s the most off-road-ready model in the new 300 Series lineup. 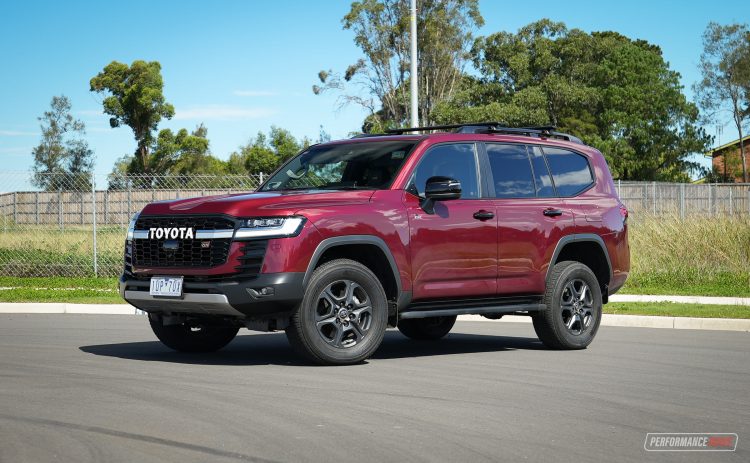 The 300 Series has been on sale now for about six months, and sales have shown some signs of spike and drop as global demand and supply issues fluctuate. LandCruiser wagon sales are in front of its main rival, the Nissan Patrol, so far this year (through May). However, with 4378 sales on the board, the year-to-date figure is down 58.1 per cent on last year. Meanwhile, the Patrol has hit 2835 sales, which is up 117.2 per cent over the same five-month period.

What the Patrol doesn’t have though is something like this GR Sport variant – there is just one trim level of the Patrol in Australia. The GR is designed as a very rugged and ready-to-play option, fitted with all kinds of proper mechanical hardware and special features to help it tackle whatever our great land has to throw at it.

It does come at a cost. In fact, the GR Sport sits just beneath the flagship Sahara ZX on price, starting from $137,790, while the Sahara ZX is just $1000 more (excluding on-road costs).

You can place an order for one today, but, according to our car buying partners over at OnlineAuto.com.au, delivery times are 12 months or more. Although, it depends on the variant and colour, and we’re told there is a chance you could get lucky and score an earlier order. 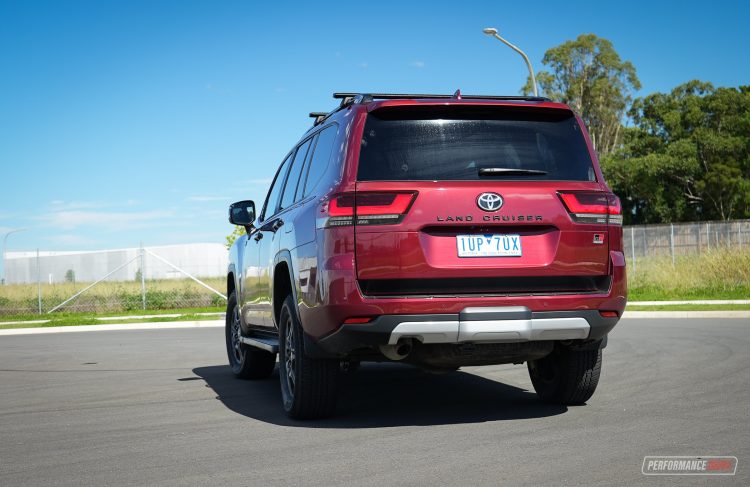 In terms of design, the exterior is dressed in a unique black front grille and bumper bar, with giant white ‘TOYOTA’ lettering across the middle unlike any other variant. A special scuff plate sits underneath the front, and black wheel arch moulds give it that sturdy and robust look. The side mirrors, window surrounds and door handles are also black. We’re not a fan of this Merlot Mica colour, but check it out in white. With all of those black contrasty bits, it looks decent.

Inside, the GR Sport comes in five-seat configuration only. The strategy is likely to upset some of the more adventurous larger families out there, but for everyone else it means heaps more boot space (we’ll get to that a bit later). Front passengers are treated to a pair of big and cushy GR seats, while the dash and overall cabin theme is a blend of luxury and sportiness. 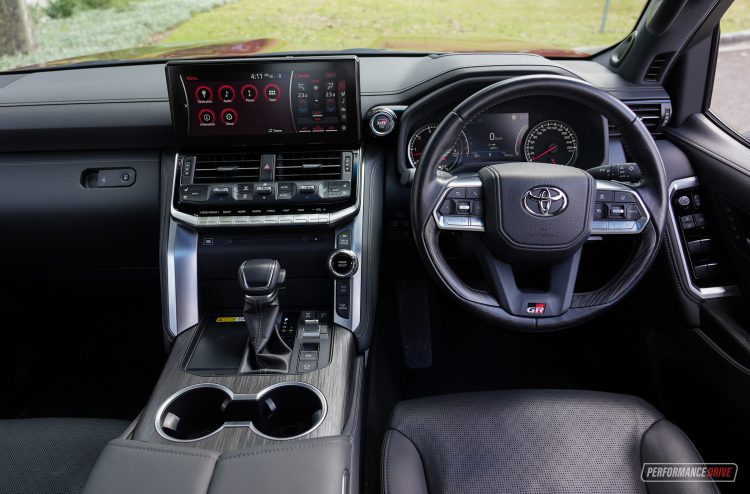 There’s a heap of driving modes and controls to play around with on the console, and up top is the company’s latest 12.3-inch touch-screen media interface. It packs in loads of apps and is pretty easy to navigate, even if some of the menus and graphics are a bit basic. The driver views a 7.0-inch digital screen for the trip information, with configurable display modes, and we like the way analogue dials remain on the sides as well – over the years the attention to detail of a mechanical moving dial seems to have lost its appeal, with screens being all the craze now.

Within the big chunky centre console (we actually mean huge) is a powered cooler box. You can switch it off so you could use the bucket of space for general storage as well. The driving position is great, with lots of adjustment available and a perched-up view providing a commanding stance over other motorists. Overall headroom and legroom levels in the front are not going to be an issue for most people. 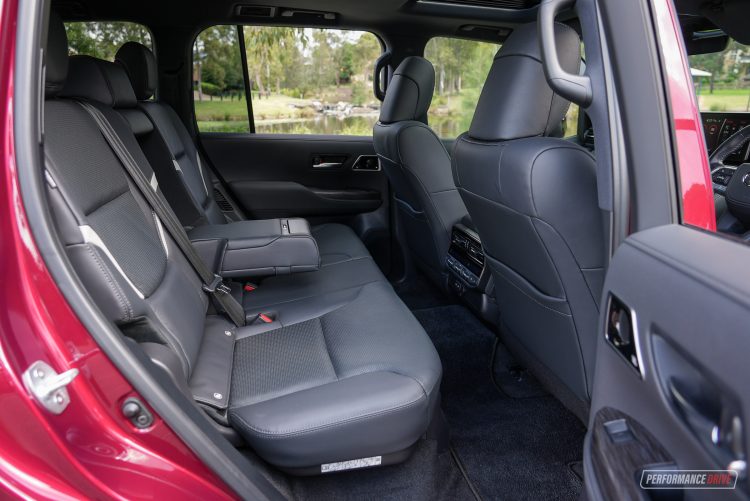 Likewise, the rear seat area is massive. The rear bench reclines for added comfort, although it doesn’t slide back or forward. Not that you’d want it to. Rear passengers get separate dual-zone climate control with vents in the ceiling and in the back of the console, as well as heated and cooled outer seats, and three different charging options for devices. Basically, this cabin is perfectly set up for a big family trip around Australia. There’s even a pumping 14-speaker JBL sound system as standard to help drown out any whinging passengers.

Without the third row of seats in the back, the boot area is truly mega-size. It’s almost like a van in here. There’s 1131 litres to utilise in the default layout, or up to 2052 litres with the second row folded and flipped up. A 220V power outlet resides in the boot wall with a proper Aussie household plug. The spare tyre remains under the vehicle at the back, and there is some under-floor storage in the boot suitable for wet or dirty items. 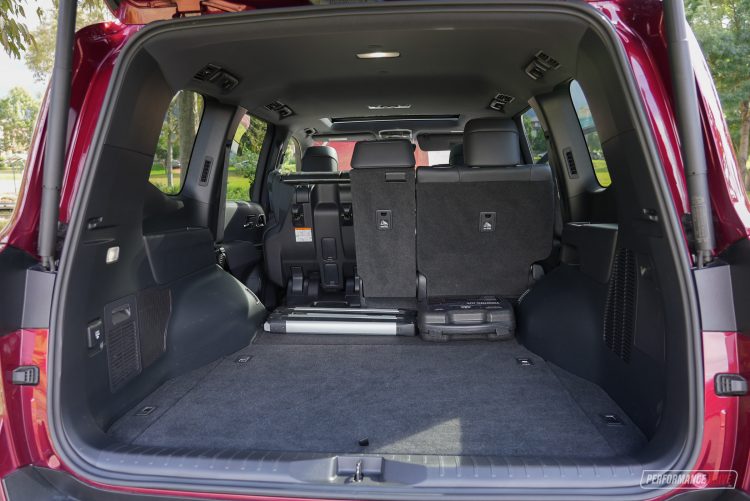 On the road the LandCruiser does feel big and a bit like a truck. There is some body roll and wobble around tighter turns, with the tall profile 265/65 all-terrain tyres obviously not helping in this area. The steering feel is decent though, giving you enough confidence to thread around tight city streets, and the general awareness of its size seems quick to grasp after just a short drive. Visibility is also superb.

Highway refinement is where this thing really shines. It loves cruising across the land… No but seriously, the long-travel suspension (compared with most SUVs) soaks up road connections and nasty divots without a bother. And the feeling of solidity and slab-like security on the road is all-empowering. It seems silly to say, but from behind the wheel you feel like you could literally conquer any terrain. So on the tarmac, including rubbish country roads, it’s just a walk in the park. 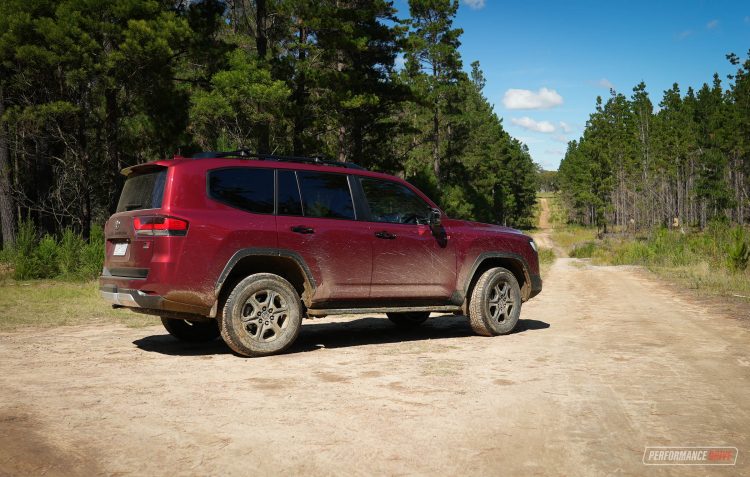 Underneath the 300 Series you’ll find the TNGA-F body-on-frame platform. With the GR Sport it is suspended by a world-first electronic Kinetic Dynamic Suspension System, providing quick locking and unlocking of the stabiliser bars. This is unique to the GR Sport variant and helps to provide copious amounts of wheel travel and flex when taking on serious off-road terrain.

Speaking of which, the departure angle is unchanged from any other variant, rated at 25 degrees, while the approach angle is 32 degrees, like all variants except the top Sahara ZX (rated at 24 degrees). Ground clearance is rated at 235mm, and you have dirt, sand, mud, deep snow, and rock driving modes to further optimise its abilities. 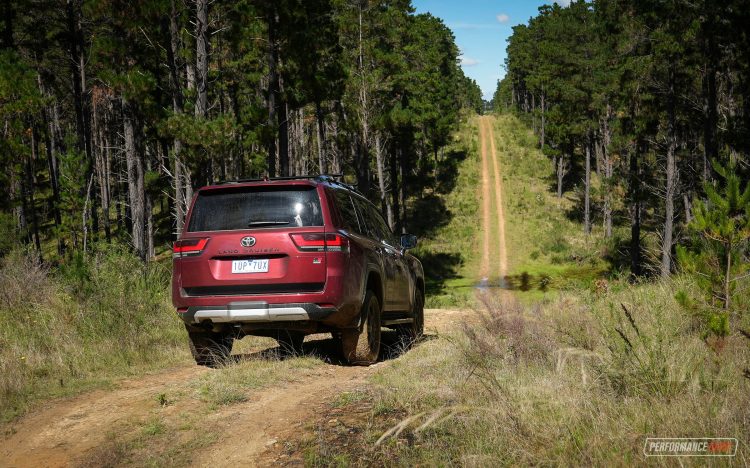 The GR also comes with front, centre, and rear locking differentials. With all of this in mind, if you still manage to get stuck, you’ve probably gone too far off the beaten track and should probably turn around when you can.

We admit we did not reach the outer limits of its capability during our tests, but we can confirm it performs brilliantly in mucky stuff. You just get the sense it will forge through or clamber over pretty much anything. It’s unstoppable. Even in very boggy mud the big LC barges its way across, perhaps with its 2545kg tare weight providing relentless momentum.

No changes are made under the bonnet specific to the GR Sport. It retains the same 3.3-litre twin-turbo diesel V6 as all other variants in Australia. This is a great engine in our opinion, offering lots more power and torque than the old 4.5 V8 (27kW and 50Nm more). It’s matched to a permanent four-wheel drive system after going through a 10-speed auto. Performance is more than adequate for this style of vehicle. And in fact, according to our tests, it is over one second quicker to 100km/h than the diesel 200 Series. 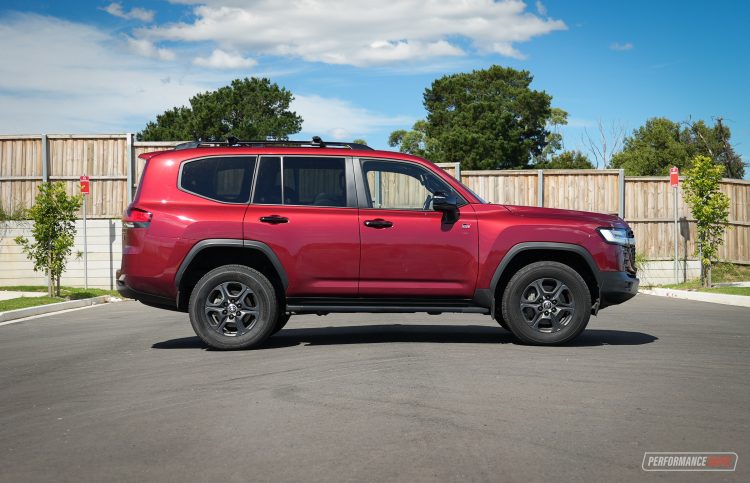 There are Sport S and Sport S Plus modes to optimise on-road performance, however, our acceleration tests using a Racelogic Vbox Sport showed the Normal mode was actually quickest. We clocked a best result of 7.75 seconds in Normal mode and using the brake-hold method to build engine revs before setting off, and 7.85 seconds using the same technique but with Sport S+ mode activated.

This is not uncommon, especially with diesel vehicles. We find sport modes sometimes force the engine to over-rev through each gear, essentially slowing it down in the case of diesels. But sport modes aren’t only designed for acceleration. Holding gears for longer can help when towing or during some types of off-road driving, such as on boggy sand. 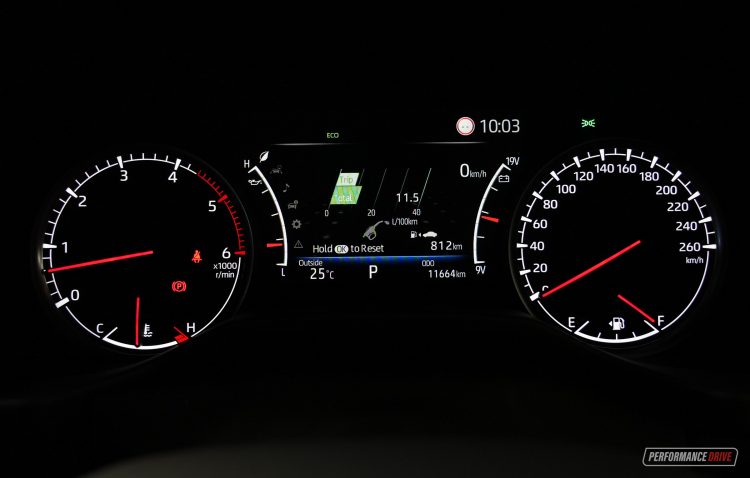 The new LandCruiser 300 Series is a beaut machine. It perpetuates the nameplate’s decades-long legacy perfectly in our view, with improvements clearly evident in all of the key and important areas; on-road refinement, in-car technology and features, comfort, while packing more power and torque from a more economical engine. Off-road capability is also pushed to a higher level thanks to the GR Sport option. Really, there’s not much else you could possibly want from a next-gen LandCruiser.