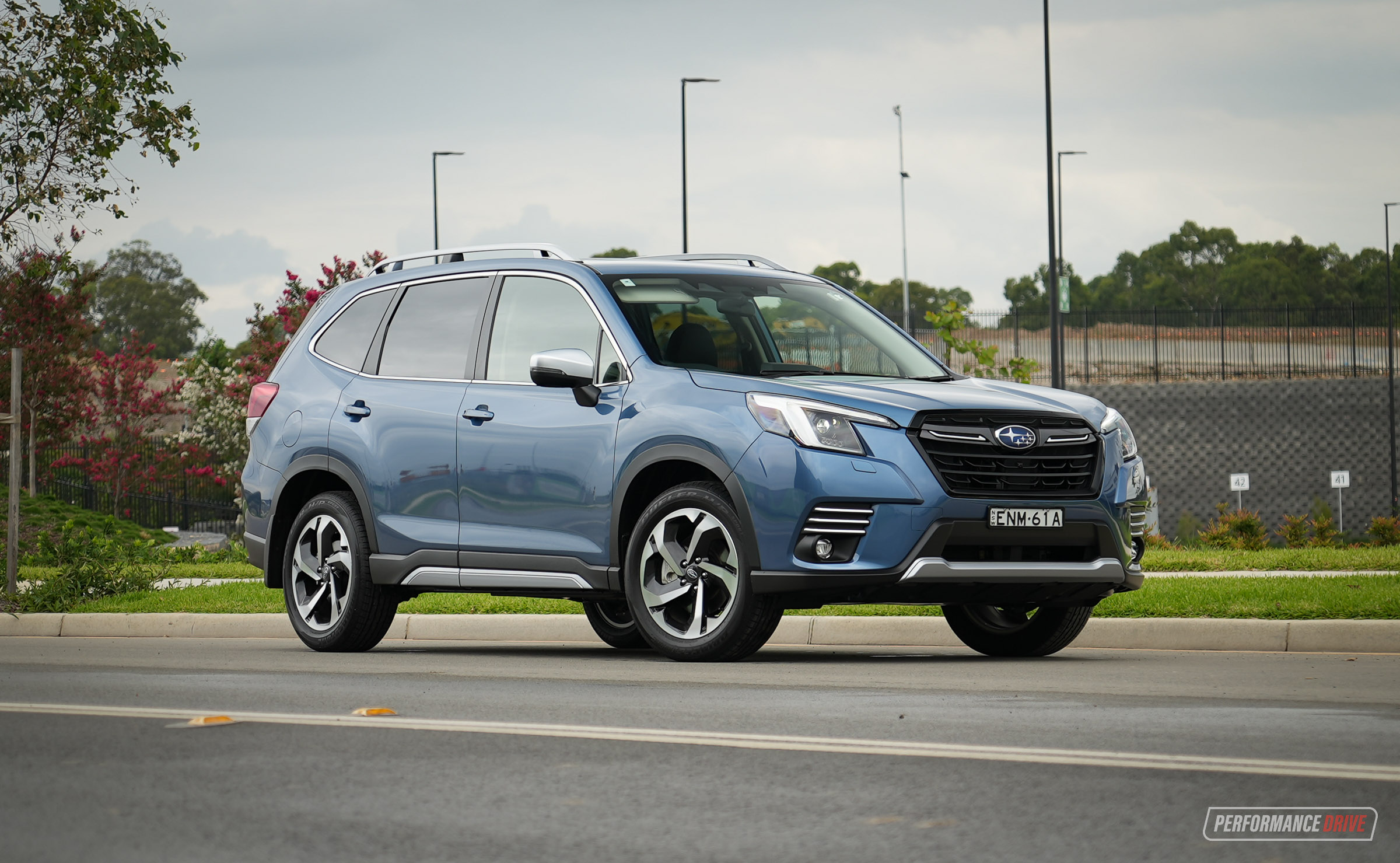 It’s mid-life update time for an Aussie favourite mid-sized SUV. The fifth generation Subaru Forester hovers around fourth and fifth place in units sold Down Under. But sales are expected to plummet as the Forester is affected by global supply issues. In fact, the Subaru website states the Forester is “sold out” (at time of writing), suggesting to wait until the MY23 model. 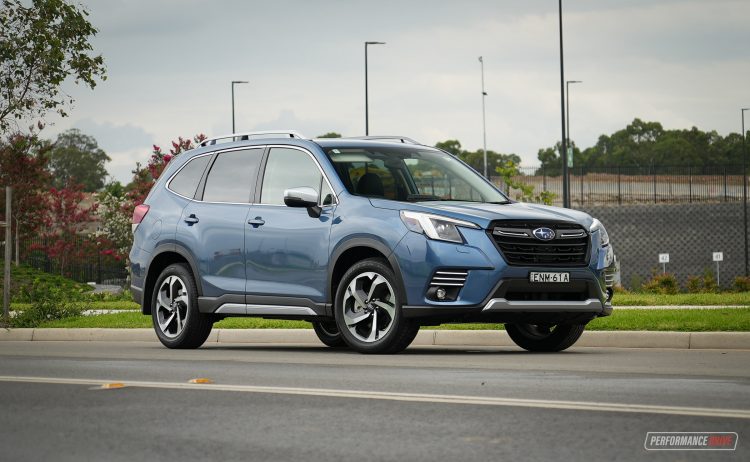 The Forester comes in four grades; the 2.5i, 2.5i-L, Premium and S. There are also two powertrains to choose from, including a 2.5-litre four-cylinder horizontally-opposed ‘boxer’ engine that outputs 136kW and 239Nm, and a 2.0-litre four-cylinder boxer engine and electric power hybrid combo that produces 110kW and 196Nm. Though, the hybrid is only available in the L and S spec. 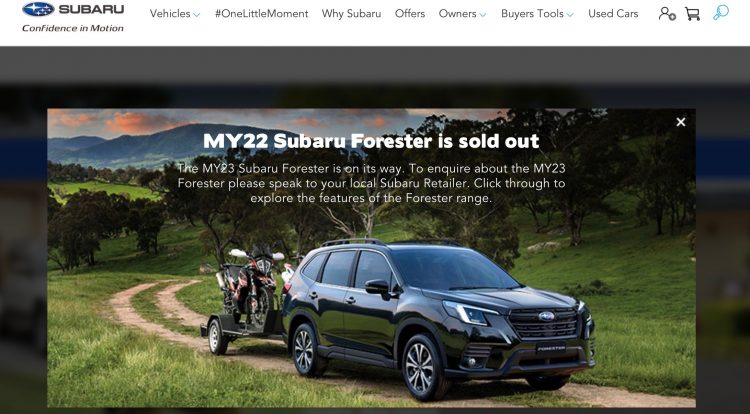 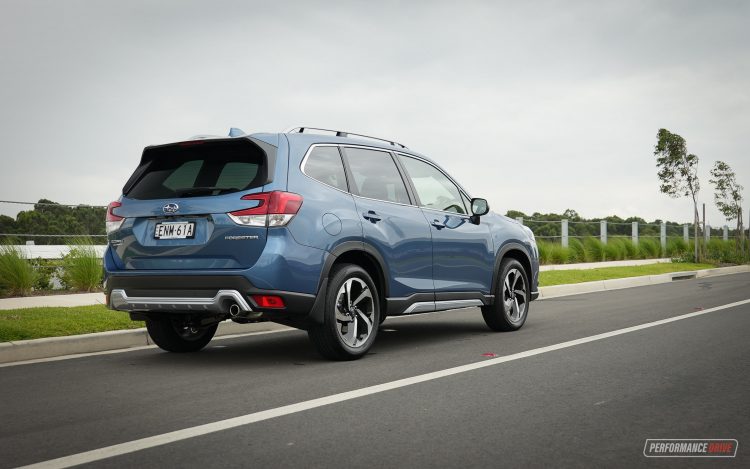 The Forester maintains its loveable and practical SUV proportions. A steep tailgate maximises boot space and being higher off the ground than a wagon gives practicality in the bush. The rear styling hasn’t changed in the mid-life update, and it doesn’t need to be. The jagged taillight design still looks modern. The front end sees minor updates to the headlights, fog lights, front bumper, and grille to bring it more up to date. It looks adventurous and rugged with those roof rails, lower spotlights, and plastic cladding around the wheel arches.

Turning to the inside and the Forester adopts less of an elegant theme and more of a chunky and rugged theme. The design is busy, but controls and materials look and feel hard wearing. You can find a heap of storage areas to stow your belongings in. Our S scores leather seating, which adds a premium touch. 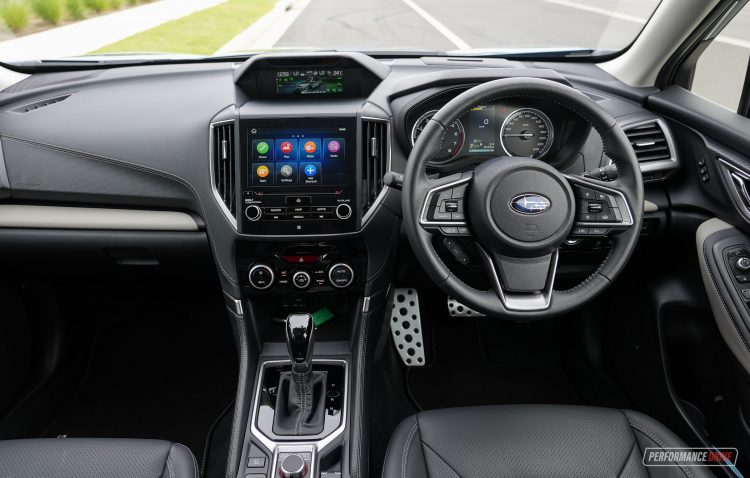 In the front centre, there is a 6.3-inch touch-screen integrated into the dash. It may seem small compared to others, but its squarer than others, meaning it is taller than the average. Even so, a primitive layout is used. It lacks style and sophistication. In the S, it is used to control an eight-speaker Harman/Kardon sound system with a separate subwoofer and amplifier. All other models score a six-speaker system. Both options pair with Android Auto and Apple CarPlay, and get this, a CD player! There is another smaller 4.2-inch multi-information display for trip info, separating two mechanical dials for the speedo and rev counter.

One of the strongpoints of the Forester is interior space, for a mid-sizer. Whether you’re in the front or rear, there is plenty of leg and shoulder room for long family trips. And in typical Forester fashion the interior feels extra airy thanks to large windows and a low window line. Sadly, the driver’s seat has no lumbar support adjustment, and it needs it. 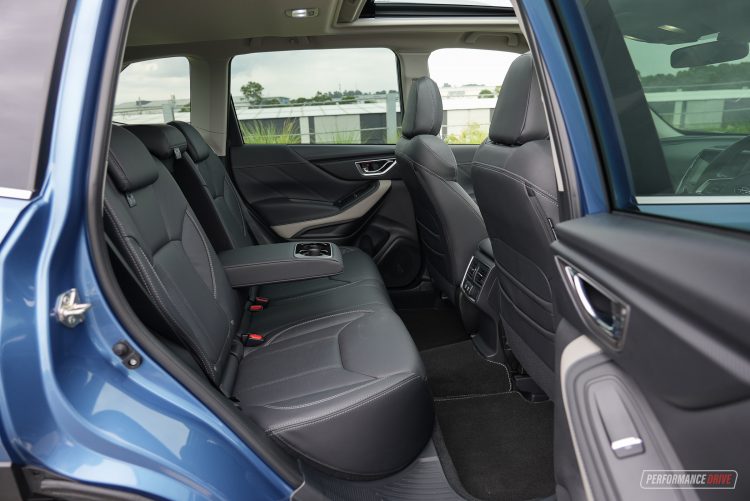 The boot officially measures in at 498 litres. Even though we found it perfectly acceptable to swallow bags from a large grocery shop, or luggage for a weekend away, it falls in the smaller quadrant among the competition. It is bigger than the Mazda CX-5’s 442 litres, but smaller than the Toyota RAV4’s 542 litres, the Kia Sportage’s 543 litres, and the Ford Escape’s 556 litres. If you need to create more space, folding the rear seats down with the easy one-touch electric folding button increases volume to 1740 litres.

An area where the Japanese brand has become a pioneer is in safety. No matter which Forester you opt for, you get a driver monitoring system, blind-spot monitor, EyeSight assist monitor, lane change assist, forward and reverse collision mitigation, reverse camera washer, distance-controlled cruise control, and rear cross-traffic alert. 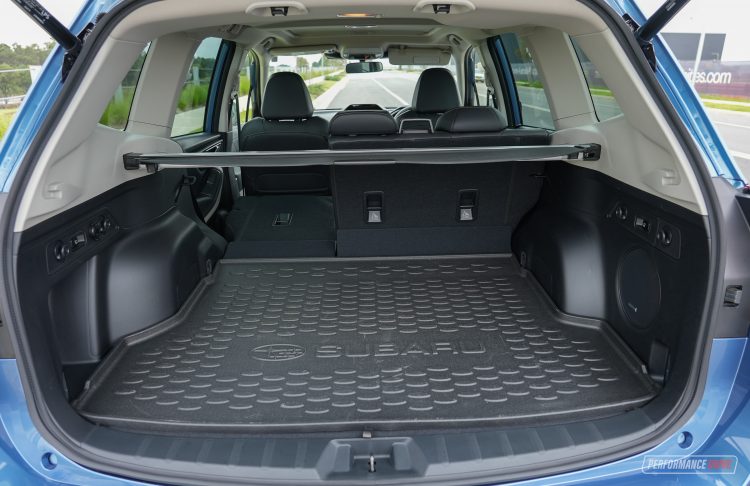 The EyeSight assist monitor detects driver behaviour and eye movements. We found it precise in grabbing our attention at suitable times, though some belligerent driver types might find it irritating. It will alert you to focus your eyes ahead even when checking your blind spot or changing the air-con settings, for example. 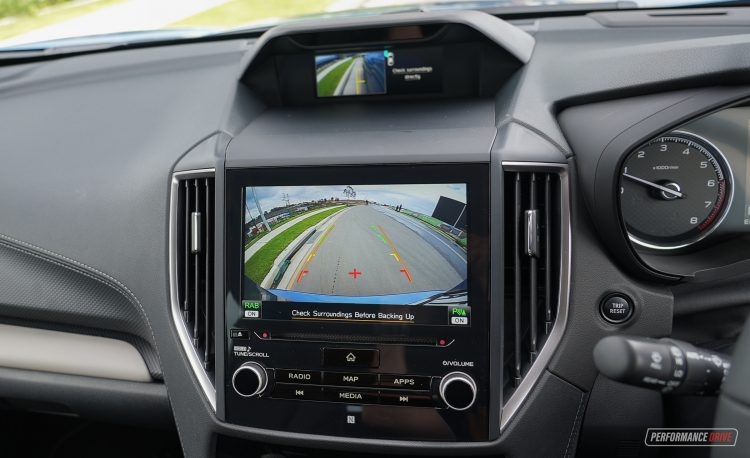 Subaru is one of the few brands that has stuck to its core philosophies over the years. Horizontally opposed engines and symmetrical all-wheel drive. But modern times call for more frugal engines, with even more power. Yes, the brand has now introduced electric power into the mix to create hybrid alternatives, but their engines are slipping behind in our opinion. The 2.5L naturally aspired four-cylinder here lacks the pulling power that many other smaller yet turbocharged engines effortlessly produce. 239Nm leaves the engine feeling breathless up hills or when you have a carload of passengers. Maybe Subaru could get away with it for an entry-level engine, but not an engine for the flagship.

136kW is about average when comparing with much of the competition, and most the entry variants of the competition. But because of the lack of torque, you will find yourself searching for that peak power high in the rev range (5800rpm) a lot more of the time. The trouble is, the engine does not feel like it is in its natural habitat higher in the rev range. You feel like you’re stressing it when you’re not even driving eagerly. We timed a best 0-100km/h sprint in 10.40 seconds, using the Vbox Sport. This is the sort of time we’d expect from a base model in this class. 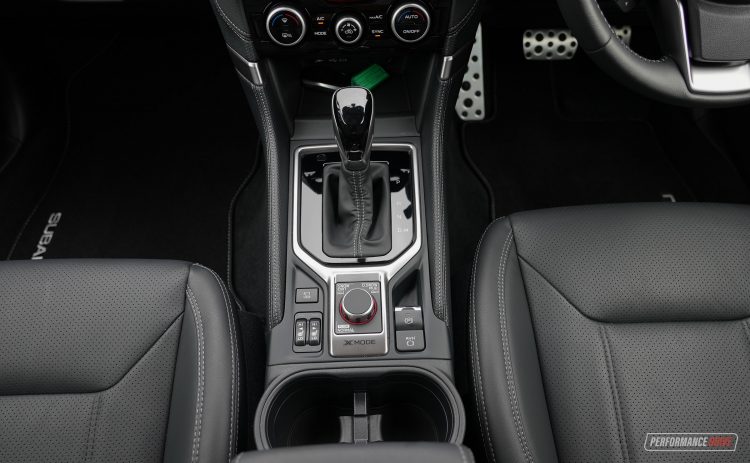 To ensure any lingering performance traits are quashed, the Forester is also fitted with a CVT auto gearbox. In other words, a droned out, breathless, single variable gear. It does try to fool you with seven artificial ‘steps’ built into the climb, but it feels boring and unenthused to drive. A welcomed improvement though is more back pressure and braking power on descent. It used to run away from you down hills much too easily.

On the plus side, the CVT auto seems to contribute to an effortless driving experience when cruising on flat roads. It rolls up to speed easily when trundling about in the city. Just don’t expect anything meatier when you give it the custard. It also contributes to a satisfactory fuel consumption average of 7.4L/100km, considering it is powering constant all-wheel drive. 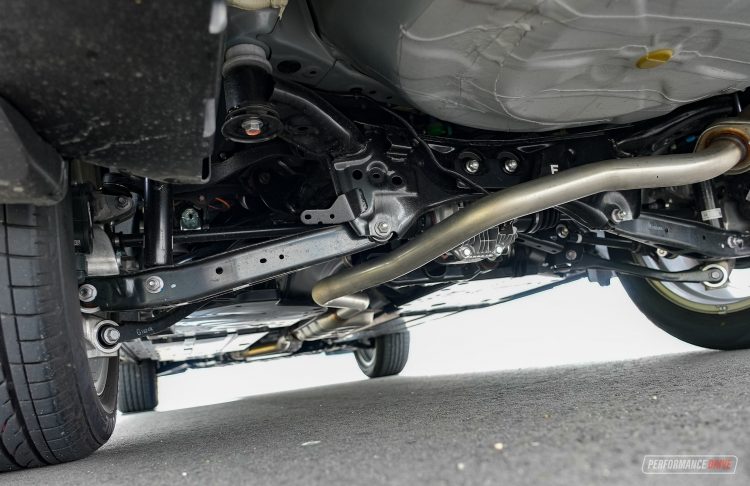 Our testing over 550km averaged 7.9L/100km. However, when you consider the power to efficiency ratio of 18.38kW (kW:L/100km), there is room for improvement. The ability to run on the lowest 91 RON fuel will be welcomed by many, considering current fuel prices.

The Forester has always performed well when taken off the tarmac and onto the dirt. And it still does. It has absorbent and reasonably long-stroke suspension, which is perfect when travelling over bumps and rough surfaces. That, in combination with a decent 220mm of ground clearance – and Subaru’s symmetrical all-wheel drive system – means the Forester is made for Aussie adventures. 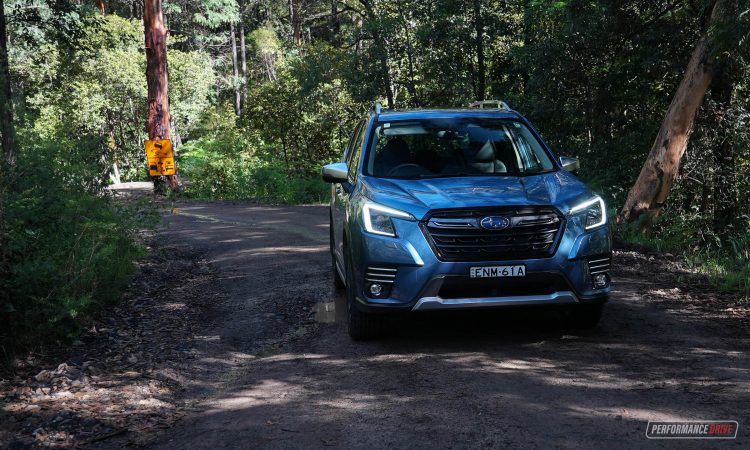 Subaru has updated its X-Mode system for 2022, so now it can automatically re-engage when the speed drops below 35km/h. The X-Mode tells the transmission to remain in a higher ratio while torque delivery is more gradual, and it tightens up the torque distribution clutch between the front and rear axles to ensure optimum all-wheel grip. The stability control system is also optimised to help with left and right wheel traction.

But softer suspension has a flip side on the bitumen. Composure around corners can be sloppy, especially with such light steering. It dances around freely, giving off a less secure feel when driven enthusiastically. But great for effortless parking and manoeuvring in tight spaces.

The Subaru Forester is perfect for a driver who envisages they will use it for rugged adventures off-grid. It feels strong on the dirt, and the interior is made more with practicality than elegance in mind. Subaru has also become one of the most safety-tech-filled brands out there, so you can be sure you’re in good hands at all times.

But if you take pride in what you drive, and you don’t just see it as an A to B transporter, you might be disappointed in the Forester’s lacklustre engine. It needs more torque and guts. And the CVT auto is just boring. However, there’s no doubt the Forester is easy to jump into and drive to get the chores done.

PROS:
– An effortless soft-roader to drive
– Ample visibility, big windows
– Driving monitor systems are among the most advanced on the market
– Brilliant Harmon/Kardon sound system
– Best off-road performance in the segment