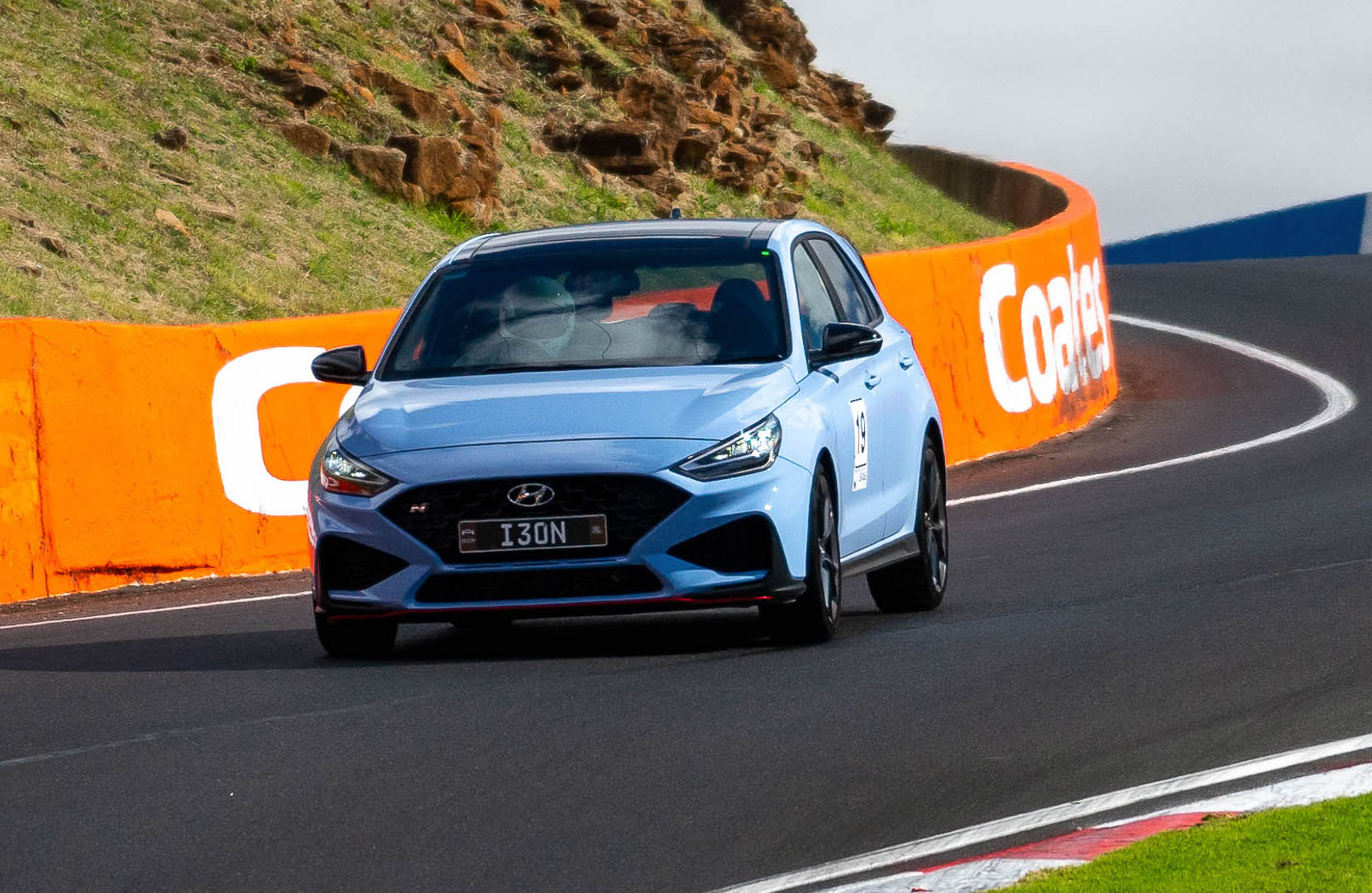 Imagine being able to take a stock car, straight from the showroom floor, trash it around a big track, all day, and not only drive it back home afterward with no issue whatsoever, but also rest assured that you have not voided the warranty in the process. Sounds like a dream, doesn’t it? Well, that’s what you can do in reality with the 2022 Hyundai i30 N hot hatch. 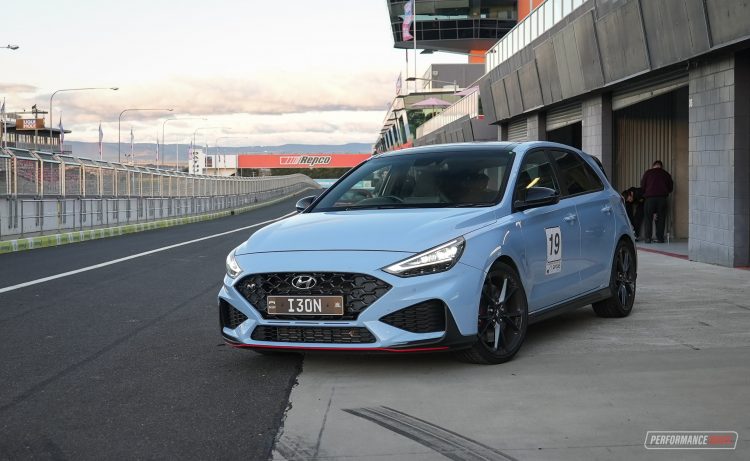 In fact, Hyundai Australia’s factory five-year, unlimited-distance warranty covers track driving on all of its showroom models, not just the N stuff. Not that you’d want to set lap times in your Staria Load work van. But hey, it’s good to know you can if you want to and still be covered by warranty.

We were fortunate enough to have a taste of this experience at a recent track day organised by Evolve Driving, at non-other-than Mount Panorama, Bathurst. Hyundai gave us a slot in the event and the keys to an i30 N hatchback with the brilliant new eight-speed dual-clutch auto.

Prices for this little beast start from $48,000 (excluding on-roads). And before you say it, yes, that is a relatively steep price for a hatchback. But, honestly, you get so much more than just a hatch for your money, including loads of hardcore engineering and development so you can not only enjoy time on the track but also set quite competitive times while you’re out there. 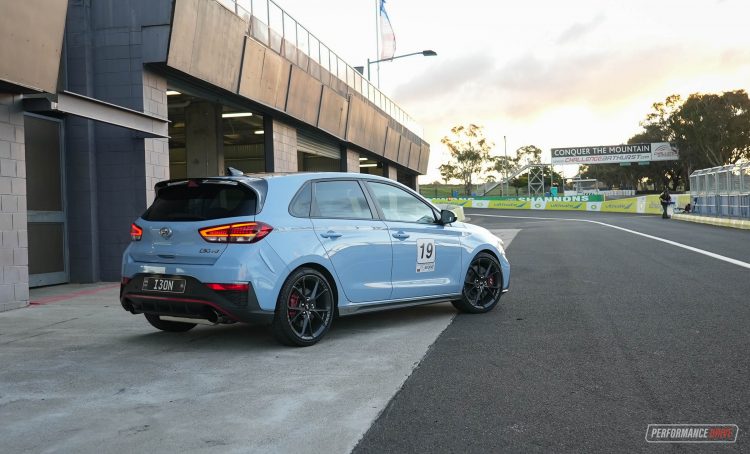 Mount Panorama is, as you probably already know, one of the most iconic motorsport circuits in the country. We can also confirm it is the most exciting circuit in the country, too. A big part of the excitement is due to the fact it is a public road for most of the year. And having driven around it on various occasions in the past, as a public road under the 60km/h speed limit, it is merely a fraction of a sample at what the track is like at full speed.

Being a public road most of the time means the surface is not mirror-smooth. There are some bumps. There are also other elements not usually incorporated into the designs of dedicated circuits, such as blind crests, stomach-turning dippers and rises, mega straights, and off-camber corners that try to pull your car down and off the road. It’s both thrilling and challenging at the same time. 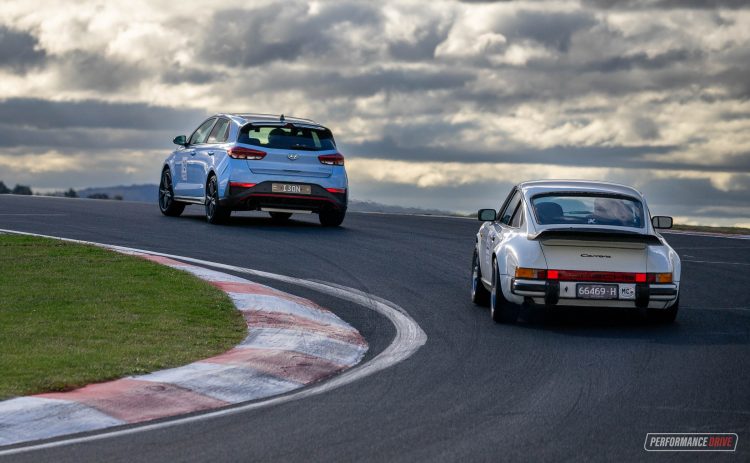 Why are we talking so much about Mount Panorama, you might ask? Isn’t this an i30 N review? Well, it is, but we can’t emphasise enough how daunting and unpredictable this track is. And so the point we’re getting at is it really helps if you’re (very) comfortable with the car. That’s where the i30 N comes in.

This is a car that, straight out of the box, just wants to drive. It loves driving. Perhaps more than you do. It has been set up to feel as real and as raw as you can get in these modern times. You’ve also got loads of different settings to play with, including throttle response, exhaust loudness, and even modes for the limited-slip differential. It is extremely adaptable so it can suit each and every driving style. 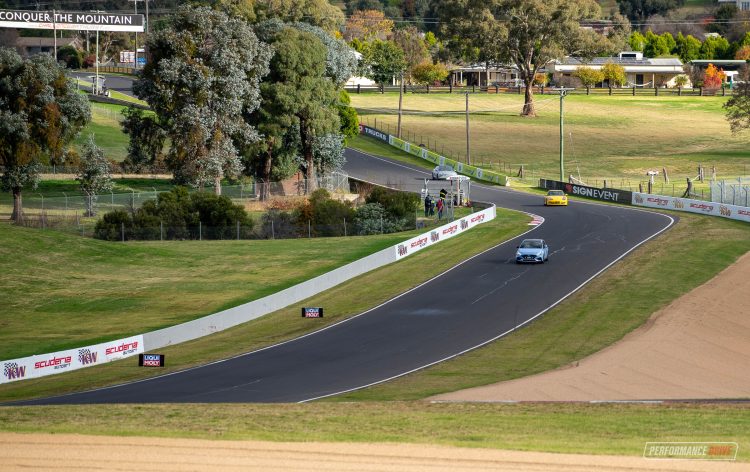 Out on the track the drive is just the same; very adaptable. We were surprised to see the speedo nudging 245km/h down Conrod Straight. After all, it’s not exactly a top-end power machine. However, it adapts and fits in with the given conditions, no matter how demanding they are. And then around corners it is pure joy. The steering feels natural and provides all the feedback you need, and the grip levels are astonishing for this style of car. According to the on-board display the car pulls over 1.0G in lateral force around bends. Keep in mind this car doesn’t have big wings and big downforce helping it out.

At this point we should tell you the car we used was completely standard except for a set of N Performance brake pads in the front. These upgraded pads are available as an official accessory. They are worth it, because even after pulling up from 200km/h through the kink, the brakes remained competent and trustworthy during our test. 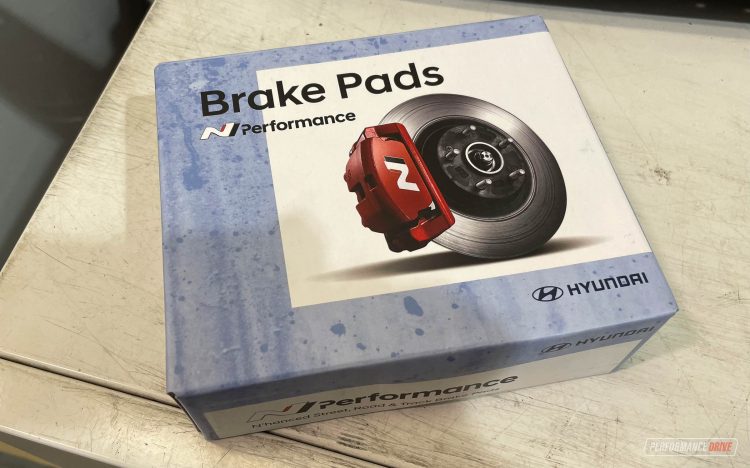 As we found out during our initial review of the DCT option, there is no shortage of engine grunt, either. The roaring and eager 2.0-litre turbo produces 206kW at 6000rpm, and a meaty 392Nm between a wide 2100-4700rpm window. It easily roars up the mountain, hitting just over 200km/h going up Mountain Straight. It almost takes off going over the hump, as you feel the front end go light and your gut turn inside out.

To refresh your memory, we saw 0-100km/h come up in just 5.19 seconds during our original tests. That’s an incredibly quick time for a front-wheel drive. Especially one that does not feature any out-of-the-ordinary components, like a stripped out interior or special track tyres.

Speaking of timing, we ran the Vbox Sport during our track sessions and the best lap we saw was 2:44.87. We have no doubt the car could achieve quicker times, too, as we were having some issues saving each timing session. In other words, there may have been quicker runs in there that we just didn’t see. Best of all though, we think any keen driver could achieve an impressive time in this car, purely because it is so skilled. 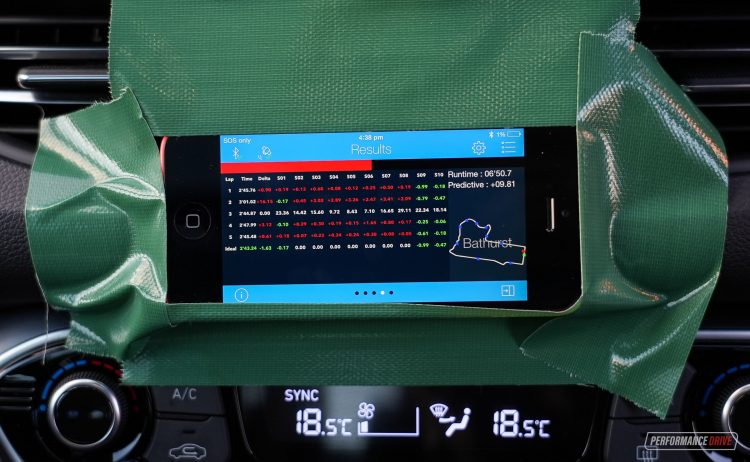 Regardless of the lap figures though, we had such an enjoyable and exciting time testing it. Partly because of the legendary track, yes, but also thanks to the car’s amazing capability and performance. We can’t think of many other relatively affordable new cars on the market that could withstand a day of high-speed, high-demand driving as well as this did. We drove this one home that night and experienced no issue at all. No wheel bearing vibrations from overheating or wobbly/warped brake discs. Nothing. It drove home exactly the same way it drove there. Even the tyres were barely feathered on the edges.

This is all a true testament to the Hyundai N team and all their hard work, and of course chief of development (at the time), Albert Biermann. As former BMW M boss, he’s the bloke responsible for some truly awesome machines like the E46 M3 and E39 M5 V8. As a former M3 owner myself, I can definitely see and appreciate some of the old M characteristics carried over in the i30 N. Just in the way it drives. It feels like it understands your intensions really well and encourages you. Needless to say, his wisdom has done wonders for the world of fun-loving hot hatches.

In my opinion, the 2022 Hyundai i30 N DCT is like a spiritual vision of what a BMW M hot hatch might have been like in 2010-2015 (in terms of driving characteristics); surprisingly hardcore track capability, perfect transmission, tight diff, in-car gadgets like lap timers and adjustable settings, and all wrapped up in a relatively practical and everyday-liveable, neat-looking car.

It’s a shame Albert Biermann has retired as Hyundai’s chief of development because this i30 N could end up being one of the last of its kind before hybrid and other technologies come in. But at least he has laid the foundations for the company now so hopefully we see more great things like this to come in the future.