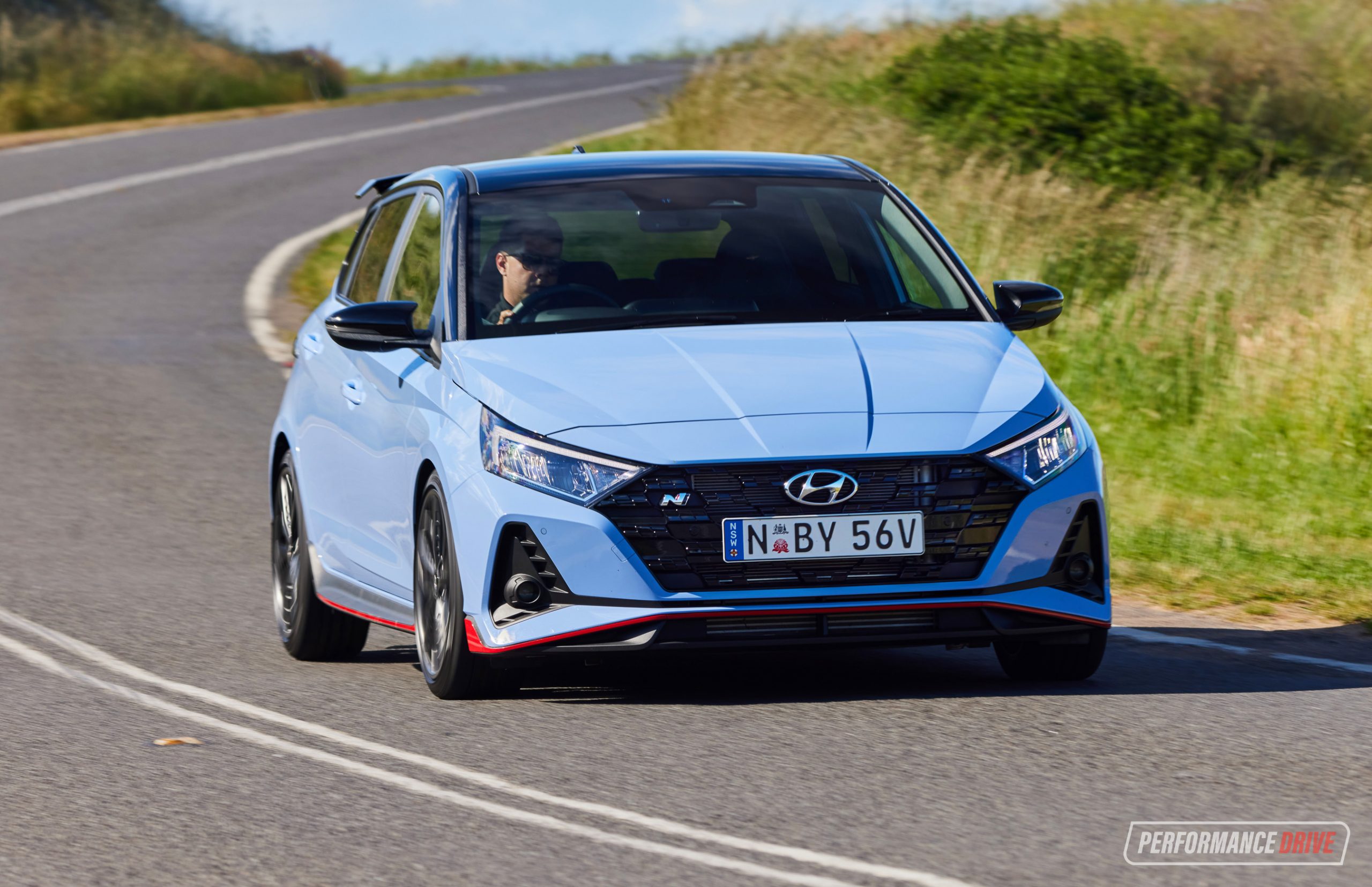 Let’s not stuff about. This, the 2022 Hyundai i20 N, is not only one of the very best small hot hatches we’ve ever driven. It’s also one of the best hatchbacks outright. 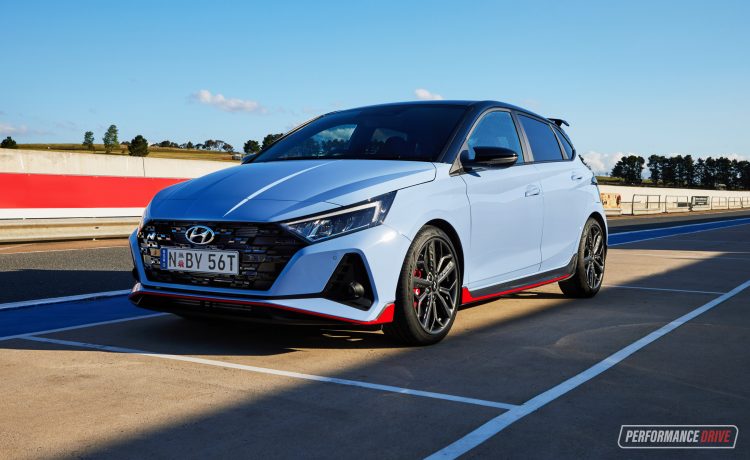 Aside from the exciting styling and fun-loving driving characteristics, this is a smart, very well packaged, and surprisingly spacious little run-around. Seriously. And it’s a bargain. It’s no longer a shame Australia misses out on the regular i20 range because this more-than fills the void.

Prices start from $32,490 for the single trim level offered in Aus. If you don’t know how to drive manual, learn. Because this only comes in manual. The only option is a two-tone black contrast roof ($1000) and some premium paint colours. 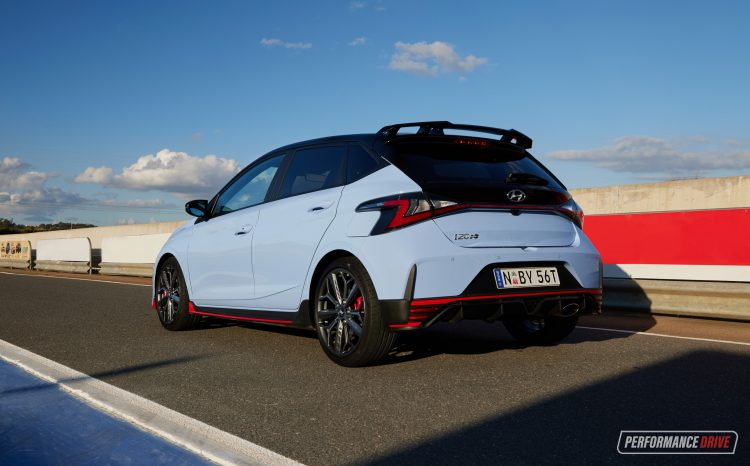 The cabin is very well appointed. In fact, we’ve seen inferior packages in the SUV market. Hyundai has obviously pulled out all stops to make sure its first compact hot hatch wows as many crowds and tantalises as many on-the-fence shoppers as it can.

Without trying to send you into a boredom comma, one of the highlight features is a 10.25-inch touch-screen media interface. This is Hyundai’s latest system as seen in much more expensive models further up its showroom ranks. It’s controlled by elegant flush buttons across the base, and features mostly intuitive menus except for some of the driving mode functions; the acceleration timer and launch control are completely separate, for example. 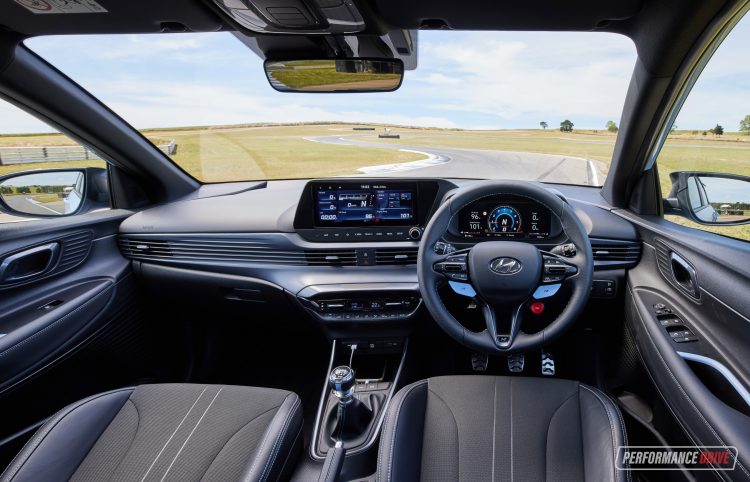 Over in the driver’s binnacle is another 10.25-inch digital screen. Again, some higher-ranking vehicles and even premium models don’t come with a digital cluster. While we do appreciate mechanical dials more, this screen displays some exciting graphics and it changes around with the drive modes. For instance, it can show you real-time turbo boost pressure and current lap times.

It’s not just the technology, though. Most of the fixtures and touch points are coated or covered or wrapped in, what feel like, quality materials. Despite being a compact hatch, there’s none of that tinny, echoey acoustic that you used to experience in cars like this. It’s a relatively refined environment for this class. Although, some of the lower dash and door card areas are made with off-putting hard plastics. But for this segment it’s difficult to apply demerit points over it. 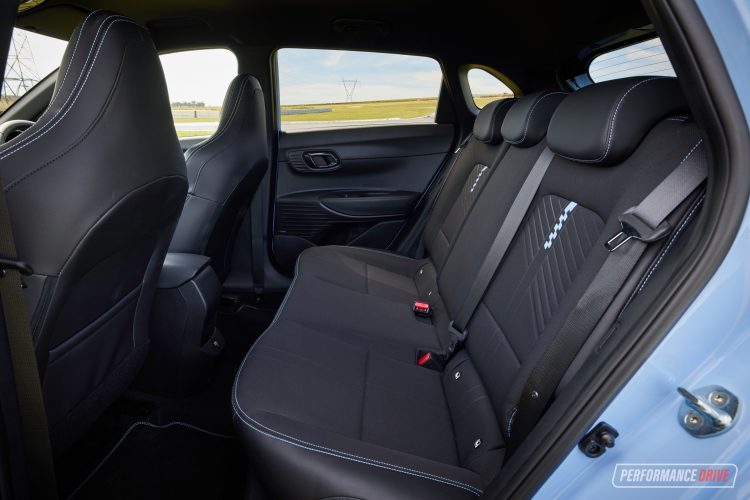 Boot space is measured at 310 litres, which stacks up quite well against most compact hatchbacks and even betters some larger hatchbacks (we’re looking at you Corolla, with your 217L thimble). You can also fold down the rear seats – completely flat – to utilise up to 1123L. Some hidden under-floor storage is also available for those pesky smaller items that never seem to sit still.

This is all what we mean when we say this is not just an attractive proposition in the hot hatch market. It should appeal to those simply looking for a good small car that puts a spring in your step. 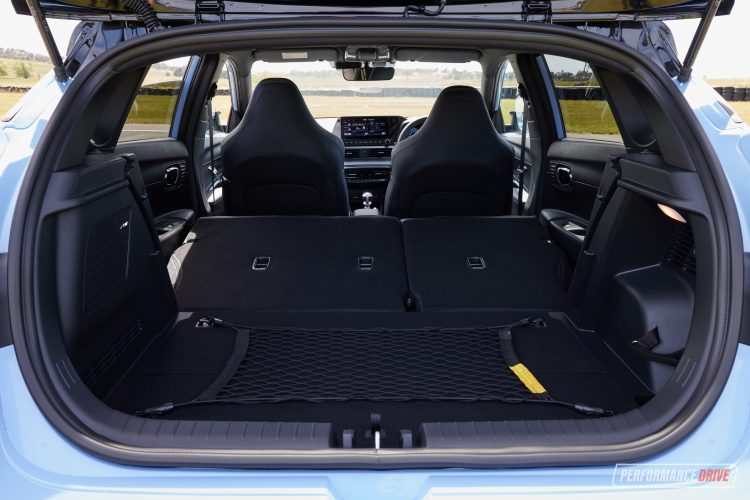 Yes, the drive. This is what it’s all about. It doesn’t matter if you’re a pro racing driver or an amateur cafe racer, or simply learning to drive a motor vehicle full stop. You’ll absolutely adore every moment behind the wheel of this thing. This is what driving is meant to be about. No electric powertrains or automated this or CVT that. None of that crap. You just get in and you drive it. It doesn’t drive you.

While the engine is the company’s familiar, albeit newer-tune (Smartstream) 1.6-litre turbo four-cylinder, it’s a perfect unit for this vehicle and its petite 1213kg tare weight. The 1600cc capacity used to be the optimum sweet spot back in the ’60s and ’70s, and we think it still is here. But just to make sure there is a turbocharger to assist things along. 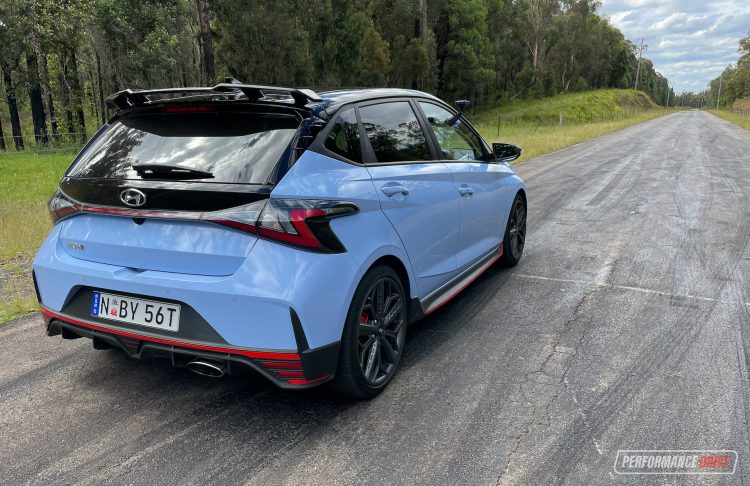 Peak power is available at 6000rpm, where you’ll receive 150kW. Remember not that long ago the Nissan 200SX S15 had 148kW (Aussie spec)? Young readers probably weren’t born yet when that was launched but it was a fast car. So to have that much grunt in a compact little go-kart-thing like this, it is more than enough grunt to get the heart racing.

During our testing on our usual private road we clocked 0-100km/h in 6.67 seconds without launch control, and 7.21 with the car’s on-board launch control. We’re not completely sure if we were using it right but it seems like the launch control system just lets you use an adjustable rev-limiter, and then it applies some (by that we mean, none) traction control for a quick getaway. Check out our video below and you’ll see what we mean. 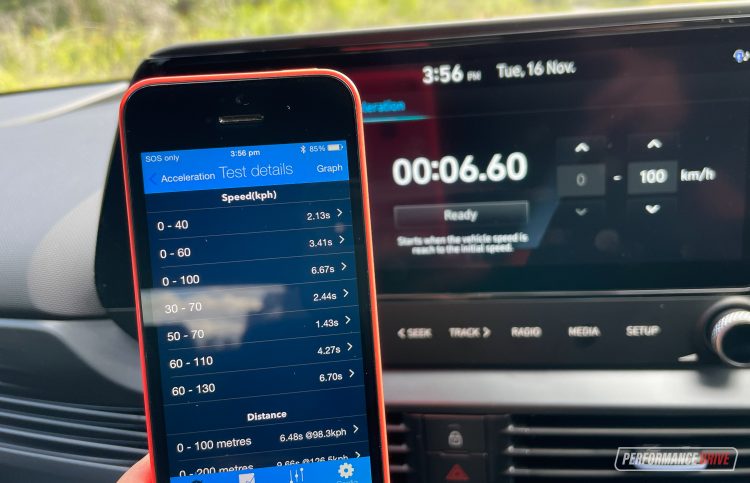 One of the fun on-board apps included is the acceleration timer. Now, we ran parallel tests with our Racelogic Vbox Sport with this system and it seems it does run on the car’s speedo rather than actual vehicle speed (most speedometers are not accurately calibrated, on purpose, mainly to ensure the manufacturer never runs into legal issues).

With launch control the vehicle’s dash claimed 0-100km/h was achieved in 7.00 seconds, while the other corresponding run said 6.60 seconds (to our 6.67 seconds, on the exact same sprint). Weirdly, the difference between the Vbox GPS and the car’s on-board timer isn’t a clear-cut percentage, which makes us question the accuracy of the on-board timer even more. But anyway, it is all for fun and nobody is ever going to try and claim official world records. 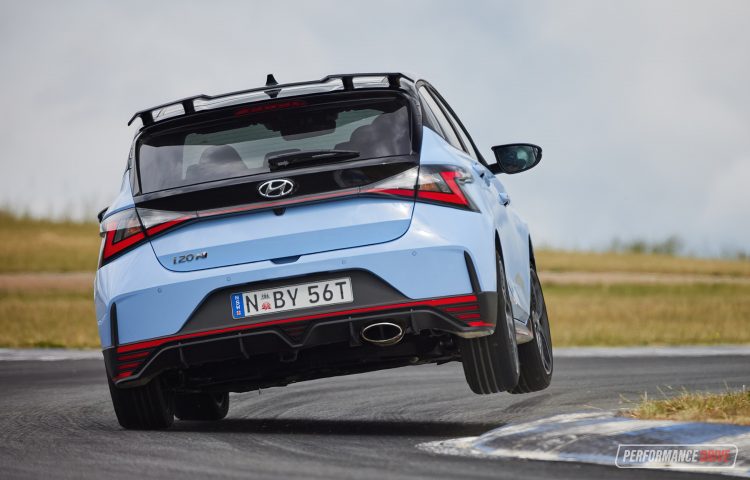 Where this car is really at home is in the corners. The wheelbase is just 2580mm, and the overhangs are short which means the wheels are pushed right out into the far corners of the platform. This provides exceptional agility. It is so pointy and ready to turn. And you can feel what’s going on underneath.

Would you like some lift-off oversteer? Yep, it’ll do that, no worries. And even as it begins to slide you’re immediately notified and you can dial in any opposite-lock required. It’s so easy and understandable. Really, like a go-kart. The suspension is suitably firm but it doesn’t mind riding ripple-stripes or tackling road undulations, and there seems to be a decent range of compression available.

Despite behaving like a kid that’s just consumed a tin of Milo in the corners, fortunately, it’s not like that all the time. It will happily cruise on the highway without being fidgety or anxious. Surprisingly, it’s pretty settled and refined in these situations. However, the engine tempo is a bit high. 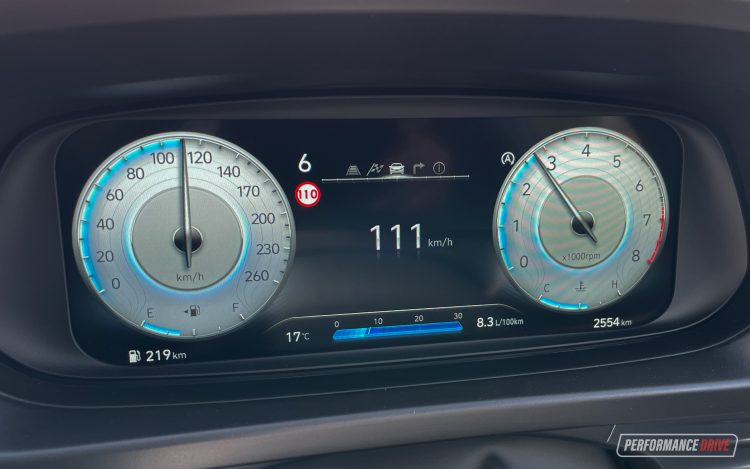 With pretty short and eager gearing you do need around 2700rpm to cruise at 110km/h. But this is another one of those aspects that is renowned for this class of vehicle. In other words, you won’t find many competitors that are more settled at these speeds. In fact some that we have tested over the years sit at around 3000rpm or higher.

Thanks to a bi-modal exhaust the engine isn’t constantly buzzing. Well, it doesn’t have to be unless you want it to. We suspect the exhaust/note is mostly about that rear muffler rather than a complete and comprehensive system, because when the sport mode is activated it can drone a bit on the highway.

Speaking of modes, there are a bunch of different buttons that sprout out all kinds of interesting (and some confusing) options. Two ‘N’ mode buttons on the steering wheel can be baffling, and then a red button as well that’s suggestive of some kind of after-burner activation (actually just an automatic rev-matching function). And then even more options within the N Performance pages on the touch-screen. 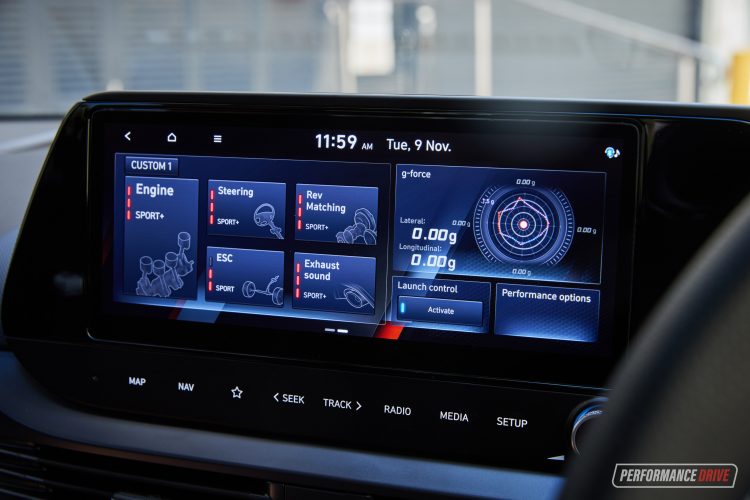 Overkill? Yes, in our opinion but the younger generations will obviously love this stuff. Basically what you can alter is the steering feel, the exhaust, and the engine mapping. There are no adjustments for the dampers or power output or anything drastic like that. There is an overboost function though which is automatically applied during full throttle, boosting torque from 275Nm to 304Nm.

During this launch event Hyundai shouted media to a day at Wakefield Park Raceway. Here we got to essentially thrash multiple examples, all day, to really get to know the car. It’s important work, what we do…

But in all seriousness, the i20 Ns held up faultlessly. Hyundai provides warranty coverage for track driving (as long as it’s none-competition driving), and the day’s outing provided further evidence of the car’s incredible longevity and reliability. And that’s in that hands of us journalists – likely more punishing than what any owner would put the car through. 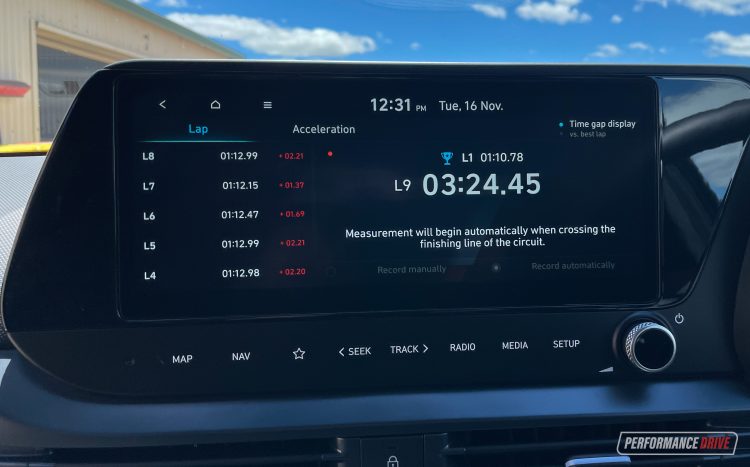 This is a wonderful, wonderful little car. A proper nod to some of the greatest hot hatches of yesteryear. Whether you’re on a track, a mountain road or just zipping about in the urban jungle. It feels exciting, reinvigorating, engaging, and, most importantly, lots of fun.

On top of that, the interior packaging and equipment count means it’s actually a superb all-rounder for those looking for a second car, or a first-ever car. If Hyundai N continues on this trajectory it’ll be the most desirable non-premium auto brand out there. If it isn’t already.