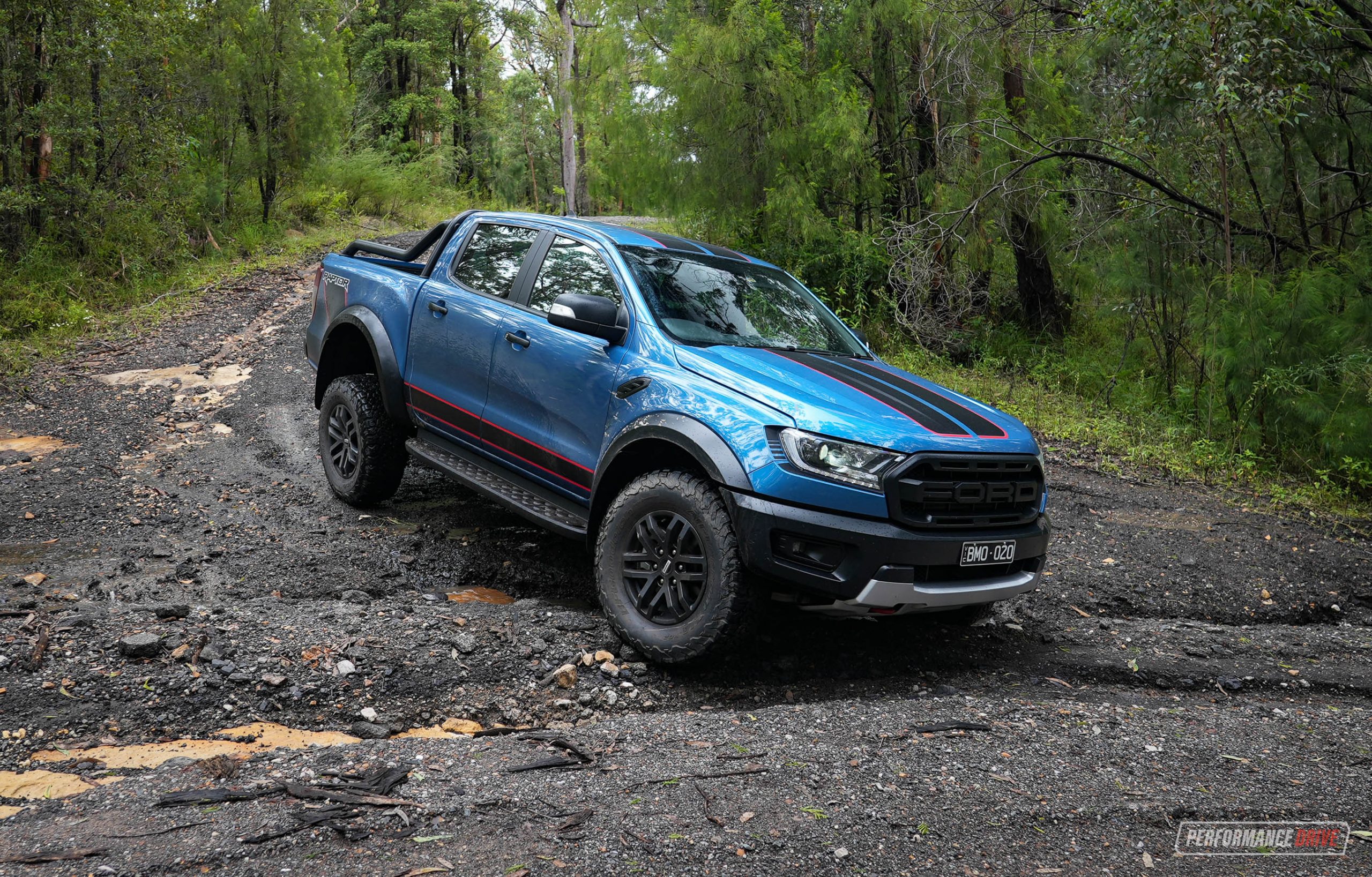 If you’re in the market for a big, ready-to-rumble 4×4 ute, the Ford Ranger Raptor certainly offers plenty of appeal. In fact, it is one of the most desirable vehicles of its kind. 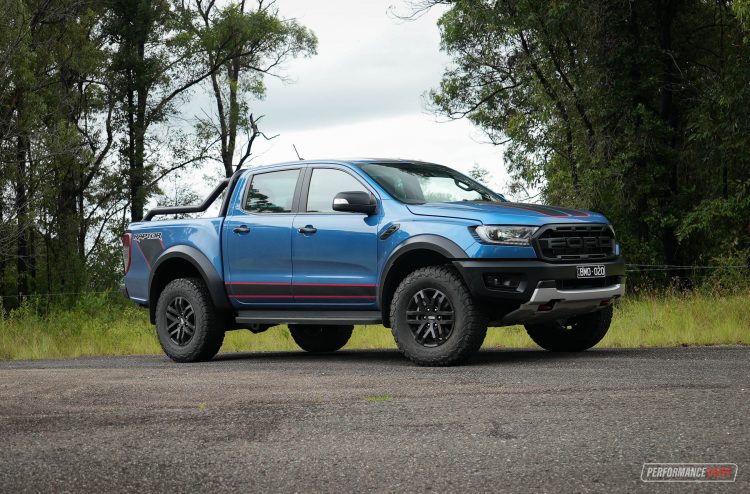 Before the all-new model arrives in a few months we thought we ought to test the outgoing model as a benchmark. And besides, you might be able to score yourself a killer deal on existing runout stock in the meantime.

Here we have what is technically the MY2021.75, but you could get away with calling it a 2022 model since the next-gen version will probably be plated as the MY2023. In fact, the new Raptor variant in particular is not set to arrive until later in the year anyway. The first of the regular new models are set to start rolling in over the next few weeks.

The Raptor badge is currently topped by the Raptor X for 2021.75, but it is basically the same as the regular version only it comes with some enhanced trimmings. Prices start from $79,390, which is about $5k more than the first Raptor that arrived in Australia in 2018. 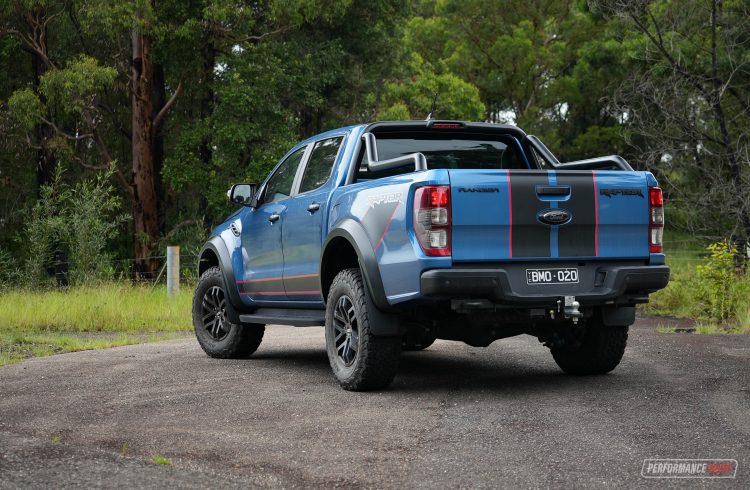 Originally, the Ranger Raptor was inspired by the big F-150 Raptor in America. But since then it has actually pioneered a new sub-segment of what we know as the 4×4 ‘ute’ class. Utes are typically a bit smaller than the big American trucks (think along the lines of the HiLux Rugged X, Navara Warrior, and BT-50 Thunder). These are primarily powered by a smallish turbo-diesel four-cylinder engine. That’s because fuel economy is a reasonably high priority in Australia for consumers (and fleet buyers) in this class.

So, it’ll probably come as no surprise this macho beast, too, features a 2.0-litre twin-turbo diesel four-banger. Such a unit doesn’t really match the visual spark and underlying character of the vehicle in our opinion, with its massively bulging wheel arches sticking out like trapezii on a body builder. Even so, it is fuel efficient and provides class-equaling performance. 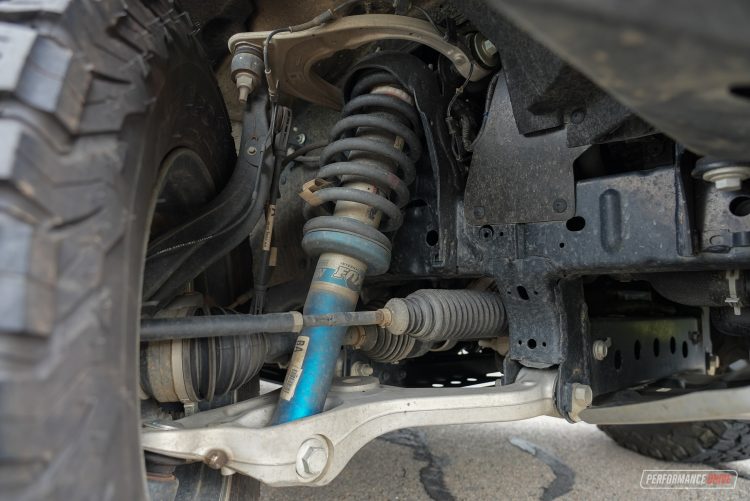 Instead of outright power, it does come with a range of very hardcore gear to help it pulverise pretty much any sort of terrain we have on this great planet. Fox Racing suspension, adjustable drive settings through an updated Terrain Management System (TMS), and more heavy-duty bash plates underneath are just some of the Raptor’s specialties. Ground clearance is raised to 283mm, and it can cross water 850mm deep.

The Raptor X was introduced last year to reinvigorate the nameplate. It comes with unique racing stripes over the body, paired with a variety of matte black trimmings, such as the front grille, wheel arch flares, door handles, side mirrors, and front guard vents. A set of 17-inch alloy wheels are also coated in matt Asphalt Black to match. It certainly looks mean and ready to rumble. 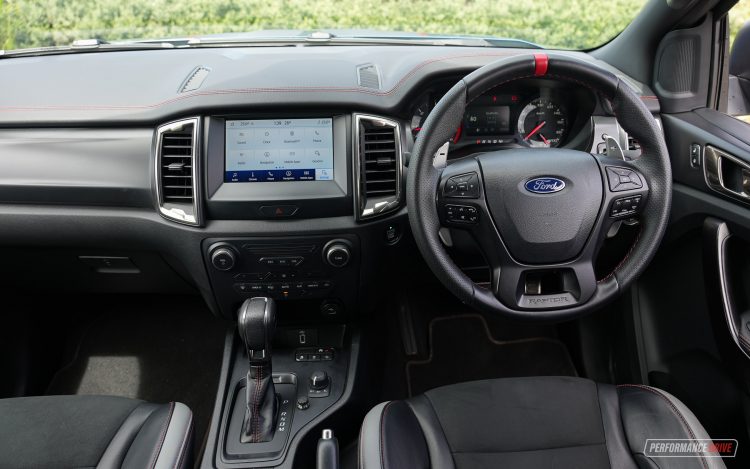 Inside, the Raptor X is presented with sporty bucket seats in the front with red stitching in various areas replacing the original blue. It’s a comfortable place to be, in here, with a surprisingly natural and low-set driving position. It almost feels like you’re sitting in a car or at least a high-riding crossover rather than a typical ute.

There’s also plenty of room to move about and spots to chuck your things into, while the dash showcases a decent 8.0-inch touch-screen. The SYNC 3 running software is pretty good, offering Android Auto and Apple CarPlay support, and sat-nav with a rear-view camera. Although, the graphics and colours are a bit basic in our opinion. 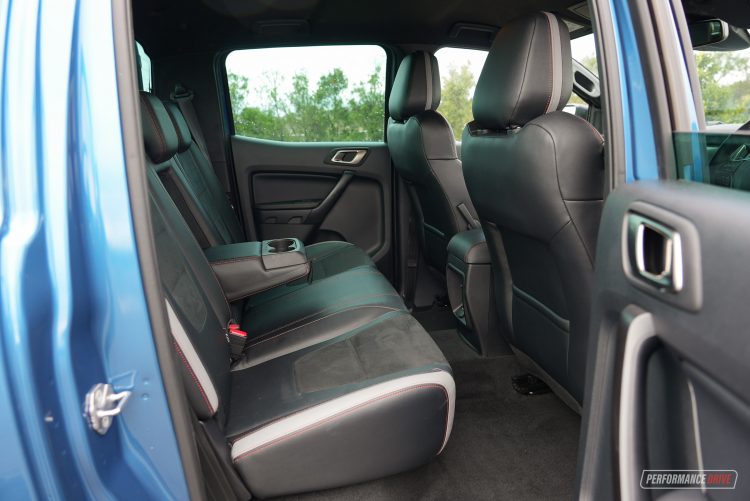 Rear seat comfort is also really good, with enough headroom and legroom to keep four adults happy, or five with some compromise in the middle. Unfortunately, there are no climate vents in the back. And this is a relatively big cabin, which means the front vents do have to work hard to please all occupants. There are a couple of charging ports in the back, including a proper AC 230V household socket and a 12V socket.

Over in the tray area you have a very large loading space for this class. The load length is 1549mm and the width is 1560mm. There’s also a slip-resistant tub-liner, a power point, and extended sports bar for the X. Due to the motorsport-inspired suspension, the payload and braked towing capacities are reduced over the regular Ranger models. Instead of a payload stamped at 954kg with a 3500kg braked towing limit (in the case of the Wildtrak 2.0 auto), the Raptor is rated at 748kg and 2500kg. 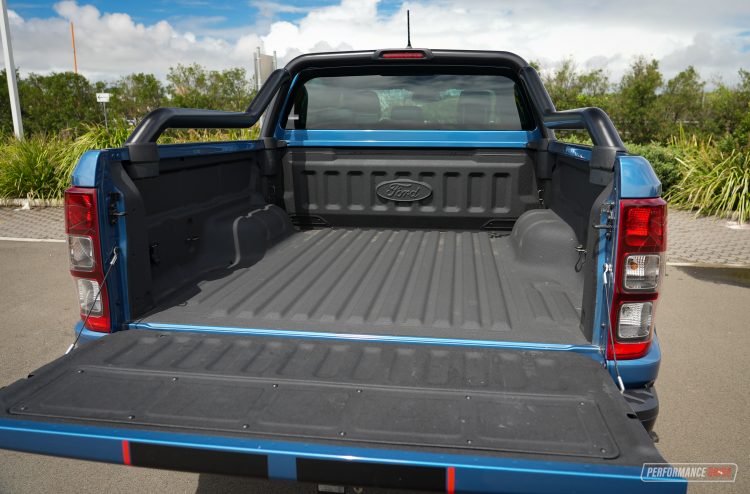 Stick your head under the vehicle and you’ll see why. There’s a proper coilover suspension package by Fox Racing. The Watts linkage rear end and independent front have been specifically designed to withstand rough terrain, at speed, Ford says. There’s even a Baja driving mode, inspired by the arduous Baja Desert rally. Engaging this slackens off the traction control so you can enjoy some sideways action.

But that’s if you can unstick the massive BF Goodrich all-terrain tyres. These measure 285/70, front and rear, and are made with extremely strong sidewalls so you smash over pretty much anything. If you do snag a piece of terrain or protruding object, heavy-duty protection plates underneath keep the important bits safe. 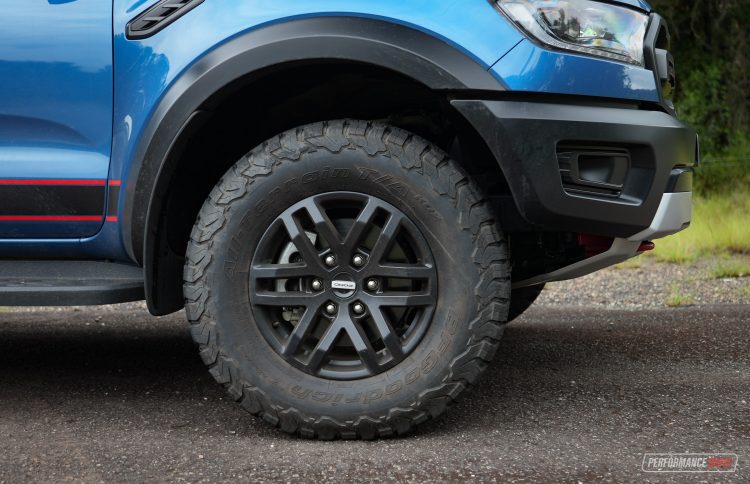 On the road the Ranger is one of the better-handling dual-cab utes on the market in our opinion. It remains surprisingly flat and confident even when pushed around twisty roads, with the main limitation being those big balloony tyres. The steering also feels quite nice for what it is, providing decent feedback and a lightweight feel.

Going for the Raptor means the track widths are wider, which obviously means it is a bit trickier to park in tight spots compared with the regular Ranger. But, theoretically, a wider track often results in superior handling and stability. In that sense, the Raptor has the foundations to be one of the best-handling utes on the market. It’s right up there. 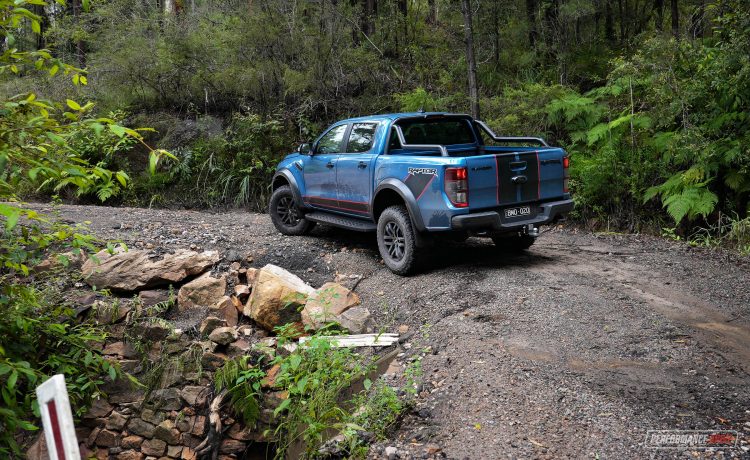 Of course, its natural habitat is off the road. Here you’ll experience utterly relentless progress, regardless of the terrain. It feels unstoppable, whether you’re tackling chunky rocks and ruts, sand, or filthy deep mud, it just keeps pushing through. At times you’re convinced you are actually driving one of those crazy stadium trucks.

That hardcore suspension has been tuned to offer excellent ride comfort as well. Even on the dirt, there are no vibrations or excessive bouncing to be felt inside. It soaks up bumps like a pro. The large tyre sidewalls play a part here, but most of the credit needs to be sent to Fox Racing. It’s a high quality setup. And in that sense, despite is racing intentions, the Raptor is perhaps the most suitable variant for those looking for an outright lifestyle vehicle as opposed to a heavy-duty workhorse.

Ford says it tested this 2.0-litre unit extensively in very harsh conditions, to ensure it lives up to Raptor standards. The rigorous development regime included running a thermal cycle, “heating both turbos to the point of glowing red for 200 hours”, Ford says. Each turbo features a high-grade alloy housing capable of withstanding up to 8600C, and the bearings are water-cooled. 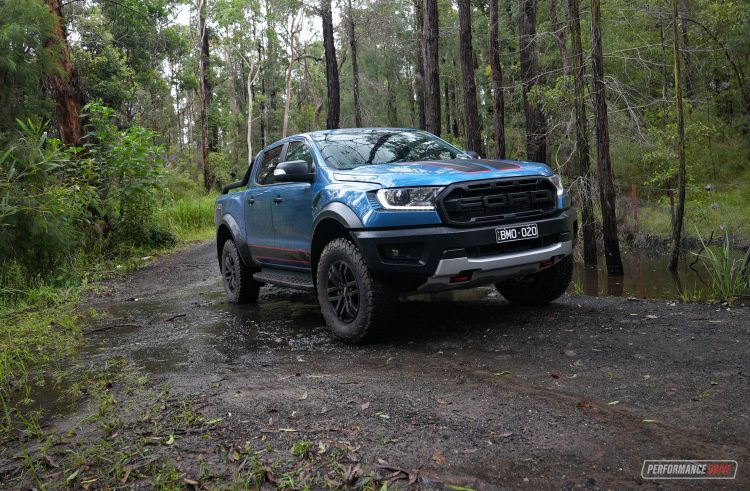 There is no denying this is a good engine. According to our decibel reader, the engine is quiet and refined as well, averaging 51dB at idle and peaking at 83dB under 60-110km/h acceleration. That’s slightly higher than the regular Ranger with this engine, but we think it is due to the Raptor featuring a shorter exhaust which stops just before the rear diff.

However, despite all of this, we can’t help but wonder how nice it would be to have some more serious power available. According to our Vbox tests, the performance is about average for this class. It scored a best 0-100km/h run of 10.39 seconds during our tests. It’s not overly slow, but it doesn’t set any records for a four-cylinder diesel either, when perhaps it should, being a Raptor. The next-gen model will change all of that though, equipped with a 292kW twin-turbo V6 petrol powerhouse. Bring it on.

With all of its testosterone and go-anywhere and beat-anyone attitude, we think the Raptor is actually an ideal option for families. The widened tracks provide really stable and sure-footed handling on the road, and coil-spring suspension all around and big tyres provide a genuinely comfortable ride. Especially compared with the regular models and competitors. With reduced towing and payload it also steers itself away from harder-working demands.

It is very pricey though, and long-term ownership costs are likely to be high – these tyres alone retail for around $400 each (at time of writing). The other main drawback for us is the performance. For a Raptor badge we think it deserves to be quicker. It should be the quickest or most powerful offering it its class. But instead it simply matches most rivals which were perhaps inspired by the Raptor in the first place.

CONS:
– Payload and towing capacities are low for this class
– Deserves more oomph
– 10-speed auto hunts around a bit