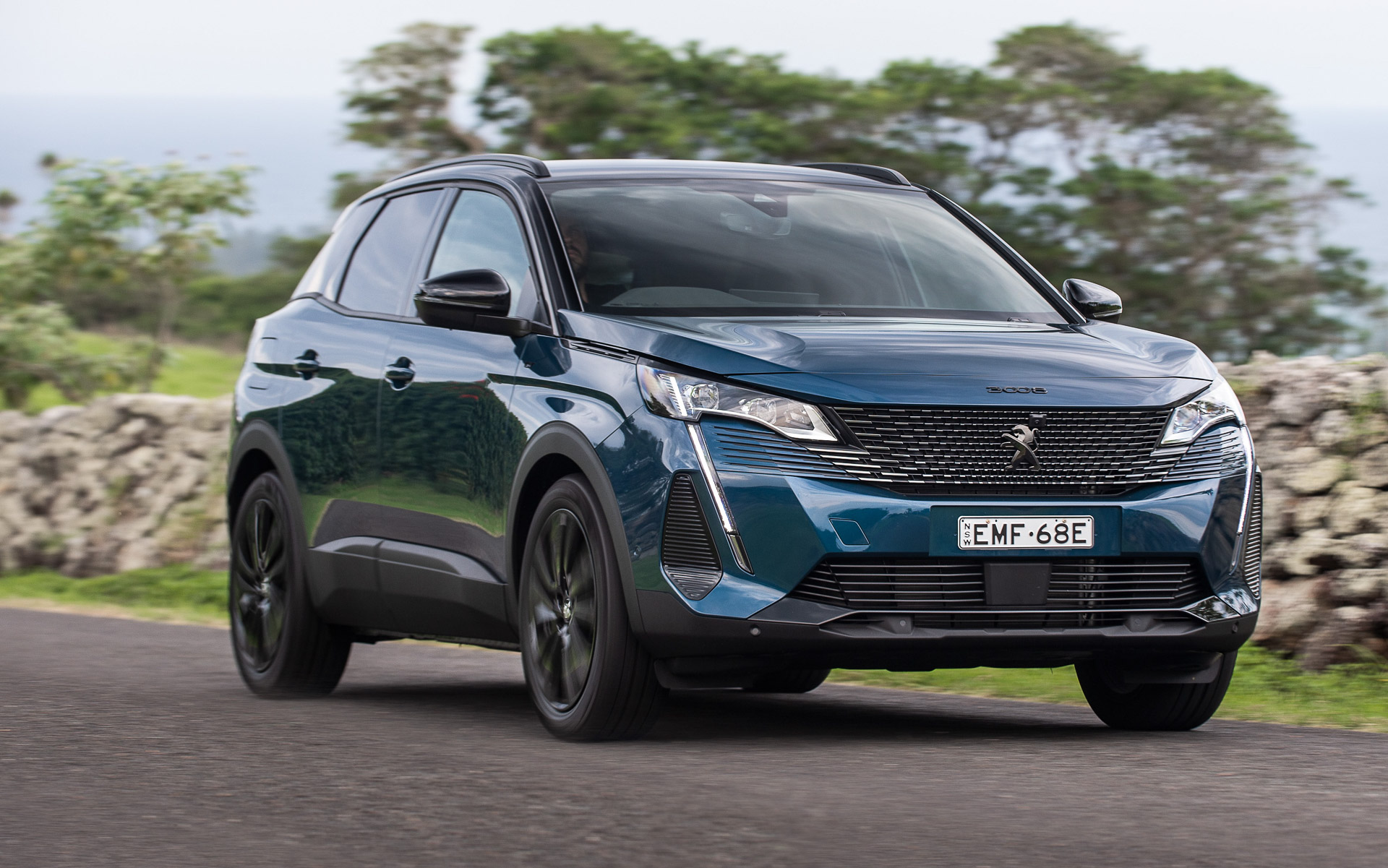 Following its debut in September, the 2021 Peugeot 3008 facelift storms into the mid-size SUV market with French flair, premium-class refinement, and a distinctively sophisticated and suave design both inside and out. A potential problem is, it is priced very close to the certified premium domain. Could this be classed as a premium product? 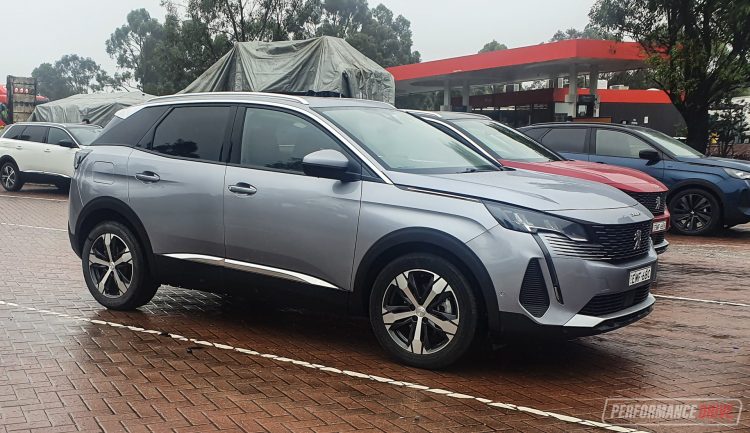 When we say ‘stormed’ into the market, we mean it literally. The launch event took place during a very rainy Sydney this week, so you’ll have to excuse the lack of our own photos. We all had a chance to test out the 3008’s grip levels though, the suspension’s response to continuously-spawning potholes, and how the interior could cope with fast-entering passengers and slammed doors.

Three main variants are on sale in Australia, spanning from the Allure, GT (available in petrol and diesel) and the top GT Sport. The GT Sport is a unique package for Australia and features some kit that is only optional overseas. We had a chance to drive the GT petrol (red car pictured) and the GT Sport (blue car pictured). 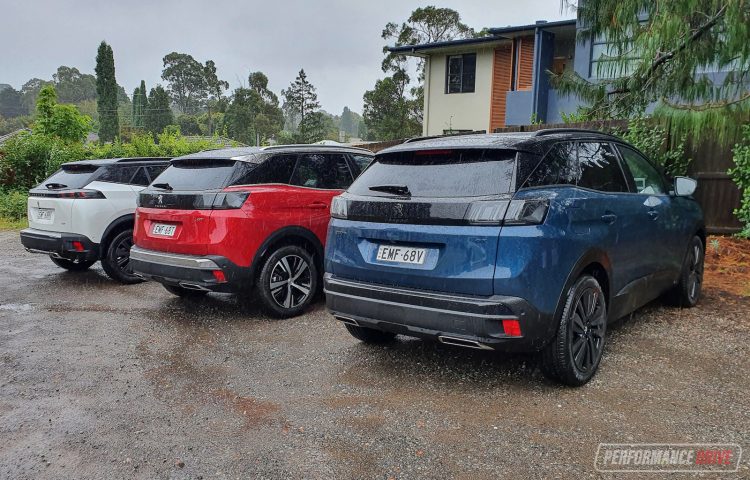 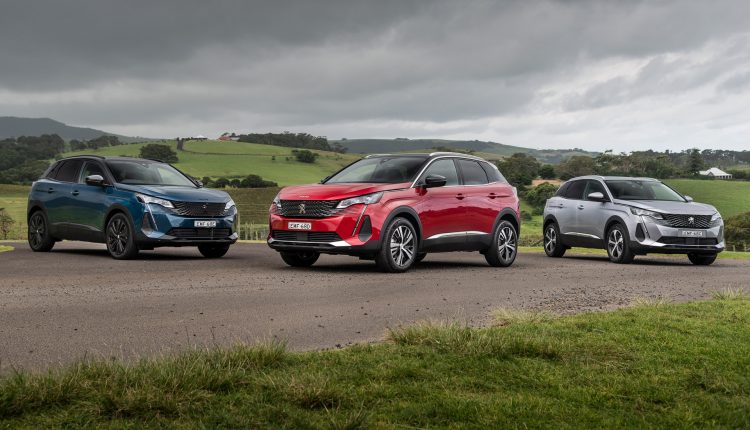 The 3008 competes with a very tough crowd, duking it out with some of the heavy weights such as the Mazda CX-5, the widely popular Nissan X-Trail, and the most popular model in the class, the trusty Toyota RAV4. So, what is Peugeot doing that helps it stand out? Well, firstly, the price certainly stands out.

Just getting into a 3008 sets you back at least $44,990, while the flagship model, the GT Sport, starts from $54,990. To give you some perspective, let’s compared that to the class favourite. Toyota offers the entry RAV4 from just $32,695. Mind you, it is pretty basic and even has a manual transmission. But even at the top of the range, the Cruiser, which comes with a high-tech hybrid powertrain, starts from $46,415. There’s also the ‘rugged’ RAV4 Edge that kicks off from $48,915. 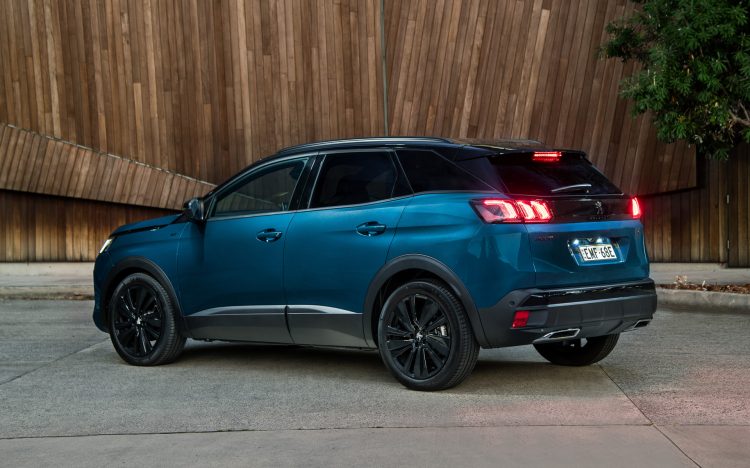 Those are some serious price differences for two vehicle models that are, according to the Federal Chamber of Automotive Industries, technically indifferent. Surely the entry 3008 Allure can’t be just $2000 away from being levelled with the flagship RAV4 Cruiser?

Fortunately, the Peugeot is filled to the brim with standard features, as well as some luxuries that you normally only find on a high-end luxury car. For example, the GT Sport comes standard with a massage function built into the driver’s seat. It’s lovely. There’s also LED headlights across the range, a fully digital 12.3-inch digital instrument cluster across the range, and 18-inch alloy wheels at minimum. 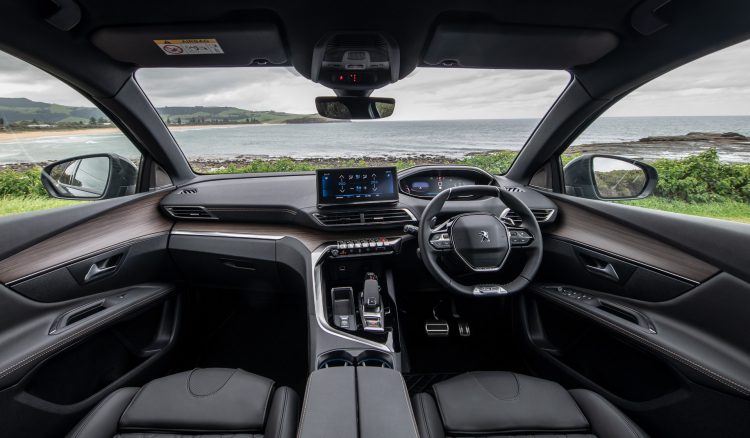 Passenger comfort is excellent in the front, especially in the GT and GT Sport. You get these really supportive and fully-contoured sports seats with special patterned stitching, while headroom and legroom meet the class standards.

It is quite a hunkered down driving position, which is made somewhat odd due to the placement of the instrument cluster and steering wheel (tilt and reach adjustable). For example, we found it difficult to find a position where the steering wheel does not obscure the speedo (exactly like the photo below). It’s just a bit unusual and we think Peugeot is being different for the sake of being different without considering the practical implications. 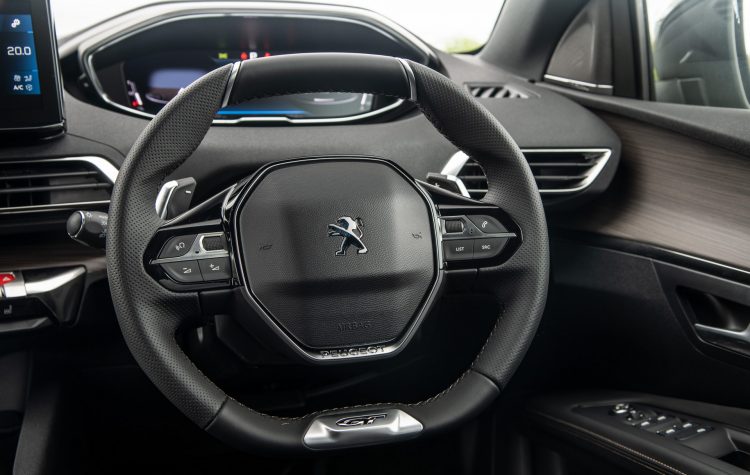 You do get used to the small steering wheel, for us however, we feel it’s simply not relaxing. Being so small you tend to move it a lot and make small corrections. If you enjoy sportiness and/or constantly feeling like you’re getting lots of things done, you’ll love it.

Rear seat space is about average for the class, while boot space measures up well at 591L, or 1670L with the rear seats folded down. It is a practical vehicle, there’s no doubt about that, with decent storage options around the centre console and lower dash, and good-sized door pockets for those miscellaneous objects that we all inevitably accumulate. 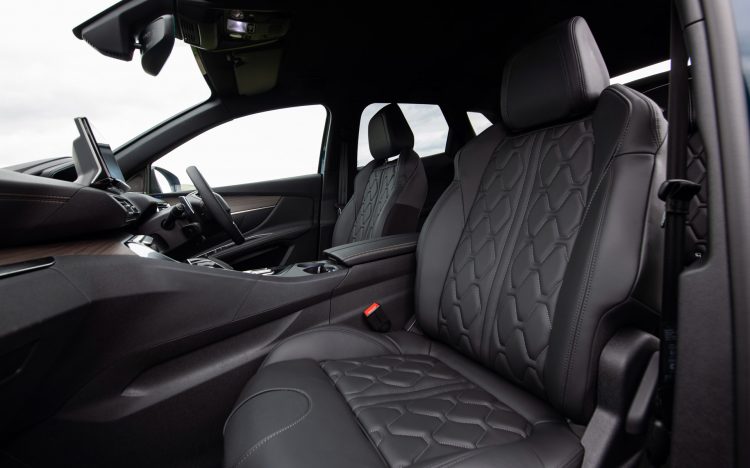 Going for the GT petrol gets you a carry-over 1.6-litre turbo four-cylinder that develops 121kW and 240Nm. These numbers aren’t really anything noteworthy for this class. One thing Peugeot always seems to manage well though is weight. All models are front-wheel drive, which itself is a downside against the popular rivals that are available with all-wheel drive. Even still, with a tare weight of just 1371kg they are extremely light. Going back to the RAV4 (sorry to seem like a comparison), the base model GX with a 2.0L petrol engine, front-drive and a manual transmission has a tare weight of 1480kg.

Poke your head under the new 3008 and you’ll see the EMP2 platform, including a basic torsion-beam rear suspension, inferior to the RAV4’s (and other rivals) more sophisticated multi-link setup. That’s where some of the weight is trimmed. In all honesty, you don’t really need a trick multi-link arrangement for this style of vehicle, so the disadvantages are hardly tangible. 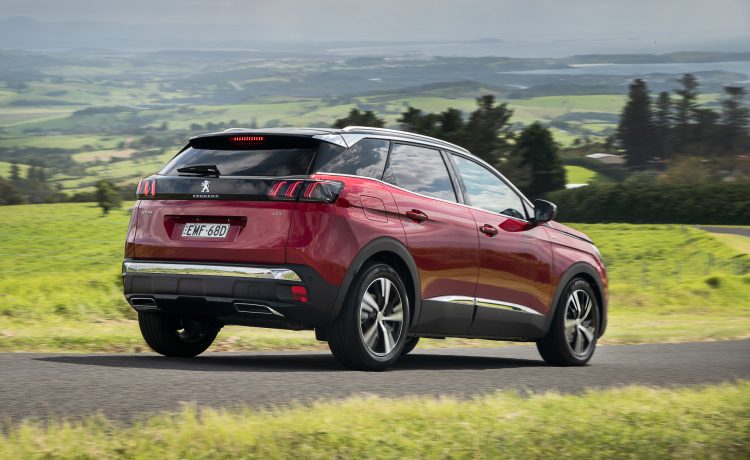 All three variants share the same suspension, as in, there is no designated sports configuration for the GT models. However, we’d describe the ride as taut, rubbery, and very compliant. The wheels always feel firmly planted on the road, and there is plenty of feedback to the driver. There also seems to be a good suspension compression range allowing it to soak up some of the ordinary country roads we have here in Australia, and yet there is very little adverse body roll. You can play around and have some fun threading through twisty roads, especially with that tiny F1-like steering wheel. And, fortunately for our drive, the standard Michelin tyres provide heaps of grip even when pushing hard in the wet.

Jumping from the GT to the GT Sport, it’s easy to feel the hike in power with the new engine, from 121kW to 133kW. The 10Nm of additional torque, you can’t feel it so much. However, this variant jumps up to an eight-speed auto, which, mechanically, provides a wider variety of torque bands. We did notice the eight-speed auto is quite elastic off the mark, virtually ‘stretching’ on initial throttle application and then ‘twanging’ you forward. This is probably something to do with engineers trying to make it as smooth and comfortable as possible, as well as progressive and sporty. 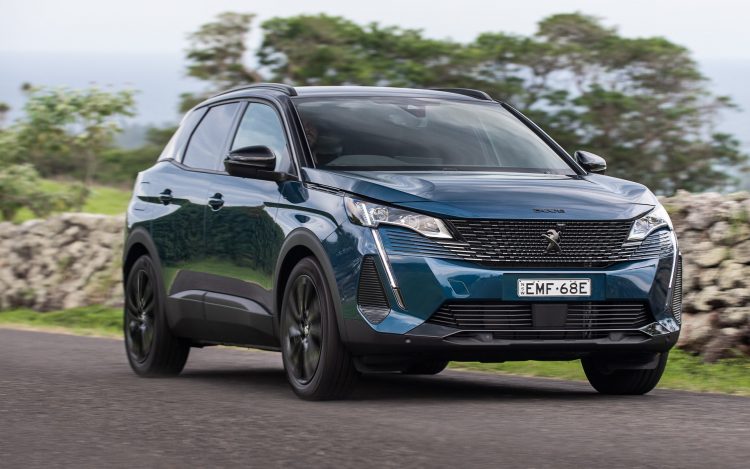 We didn’t get a chance to run our usual Vbox tests, as it would’ve been dangerous. Mainly though, the times would not reflect the true performance potential due to the sheer intensity of the rain and the slippery road surface. Acceleration fans can use Peugeot’s claim as a guide, though. The 121kW engine promises 0-100km/h in 9.9 seconds, while the 133kW unit with the eight-speed requires 8.8 seconds.

These times feel plausible to us. The 121kW GT does well to get up to motorway speeds, revving with some energetic and eager attitude, while the 133kW GT Sport definitely gets there with less effort. Again, the eight-speed auto helps in this department as the engine can utilise the additional ratios.

There are driving modes to play around with for a level of versatility. Peugeot says the powertrain is able to study and learn driving habits, too. So if you’re the kind of person that enjoys four or five cups of coffee per day, this car will try to behave like it’s running on litres of coffee as well. 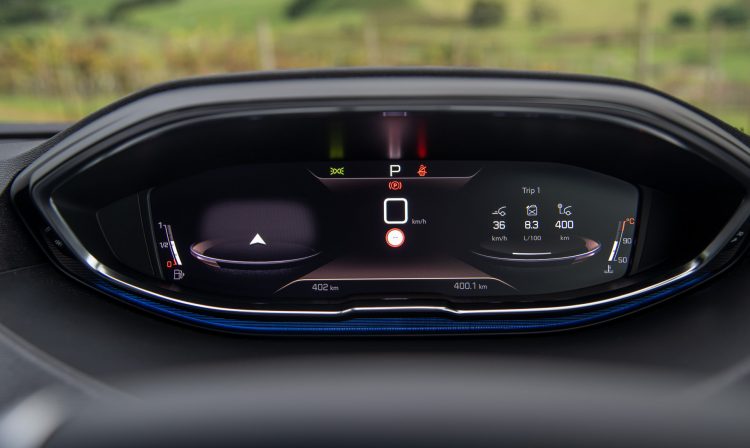 If you really desire power and performance in this class there are some more powerful rivals, such as the 183kW Ford Escape ST-Line FWW/AWD, the 170kW Mazda CX-5 GT AWD, and the 163kW RAV4 hybrid AWD. The Ford, in particular, stands out in this department. And interestingly, the AWD version is priced from $40,990. Again, the price range of the 3008 doesn’t do it any favours.

On the topic of power, Peugeot Australia confirms it will be introducing its new 221kW plug-in hybrid powertrain for the 3008 later this year, potentially in the third quarter. That will, undoubtedly, blow the competition out of the water. It’ll also offer excellent economy, and the ability to drive on electric power alone for around 48km.

Speaking of economy, the new 133kW 1.6 turbo is very fuel efficient, including compared with the main rivals. Officially, the average consumption is just 5.6L/100km. That’s not far off the RAV4 AWD hybrid’s rating of 4.8L/100km (again with the RAV4, we know, we only keep mentioning it because it is the most popular in the class). The new unit also passes stringent Euro 6.3 emissions regulations. 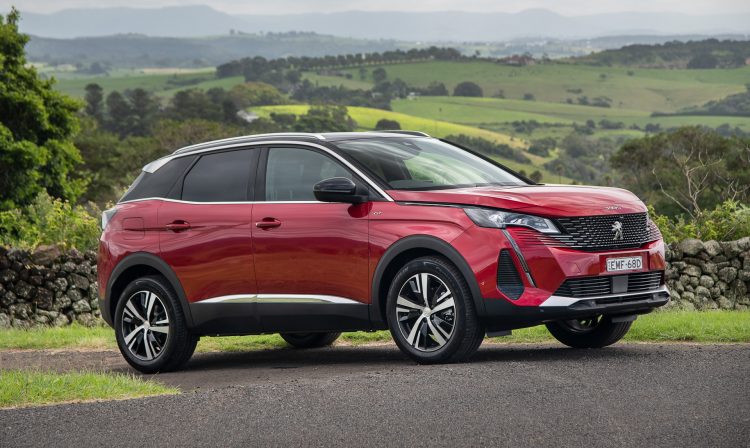 For something that doesn’t wear a ‘premium’ badge, the prices are very high. And it’s not available with AWD (yet). These are two hard-hitting negatives for us, against an otherwise sound product. And we guess there is some value in paying extra for exclusivity – you only need to take a look at some of the high-end brands to see evidence of this.

As a product, disregarding the price, it is a fresh take on this somewhat tired SUV market segment. The new model is a solid, very refined, and well-packaged mid-size SUV. It feels good on the road, and the quality interior design and materials definitely set new standards for this class. There’s also some very impressive technologies in here, including some that support safer driving and some that enhance comfort and provide an entertaining journey. Overall, if you’re looking to buy a premium SUV but can’t quite stretch there, this is a great stepping stone toward that direction.