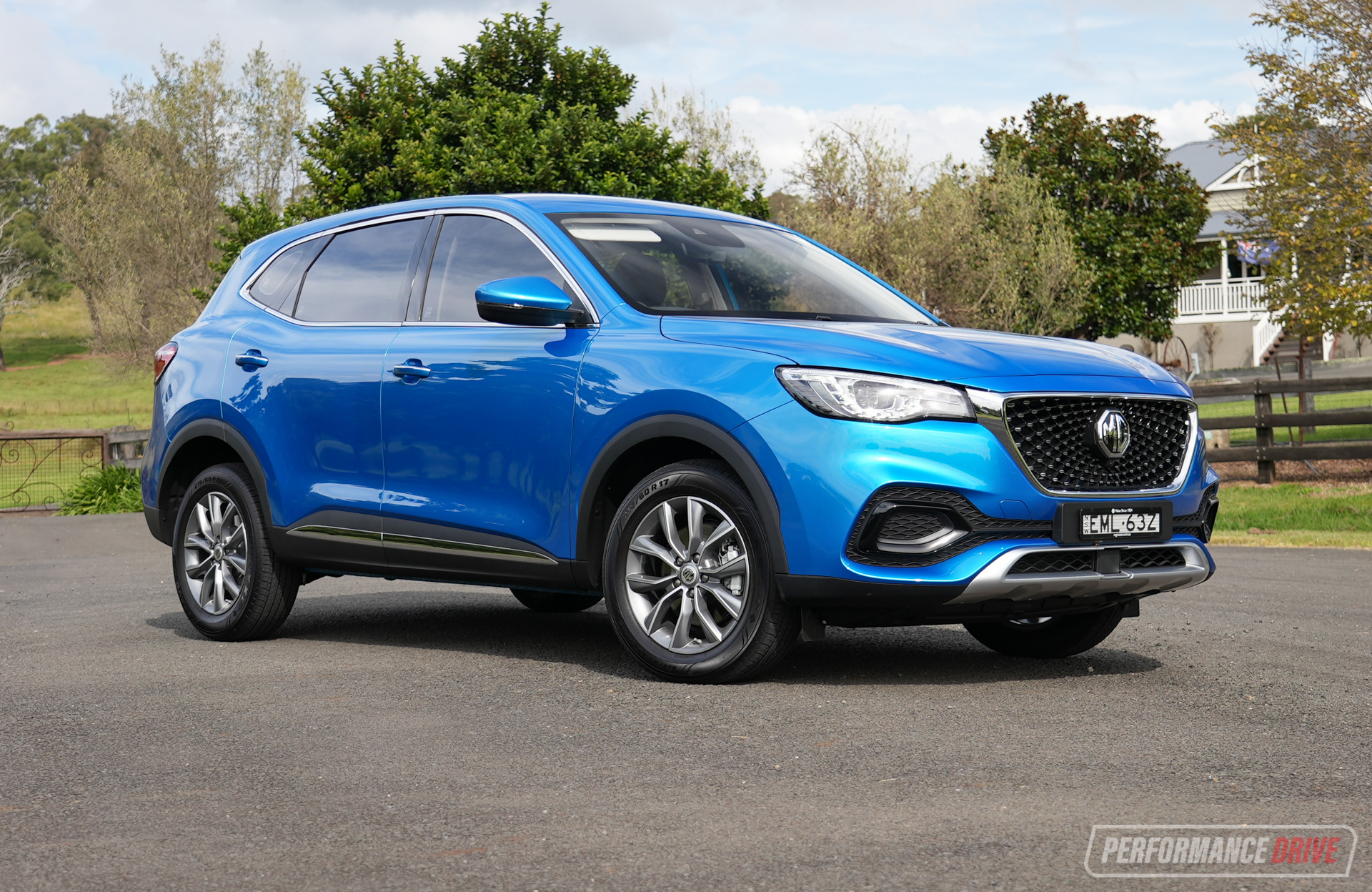 The re-invented MG brand continues to spearhead the competition, wedging into the mid-sized SUV market with the MG HS. It nerves its rivals with unbeatable pricing, elegant looks, and a substantial seven-year warranty. 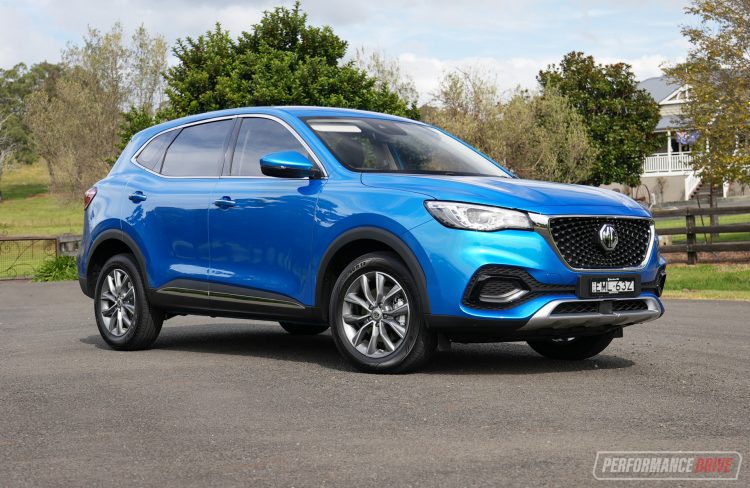 In case you did not know, the struggling British MG brand was bought by Chinese state-owned car maker SAIC Motor Corporation in the late 2000s. Production of all MG cars moved to China, where manufacturing is significantly cheaper. And that’s why we see once premium-priced MGs selling at entry-level prices today.

For the HS, buyers can choose from the entry level Core, the Vibe, Excite, Essence, or the top spec Essence Anfield. Most variants come with a front-wheel drive 1.5-litre, four-cylinder turbo-petrol engine that outputs 119kW and 250Nm. There is an all-wheel drive ‘X’ version available in the Excite and Essence, where you get a 2.0-litre turbo-petrol that dishes out 168kW and 360Nm. Both setups are paired to a seven-speed dual-clutch automatic transmission. Just recently, MG also announced plug-in hybrid version that produces a class-leading 209kW. In terms of variety, MG is tackling the segment head-on. 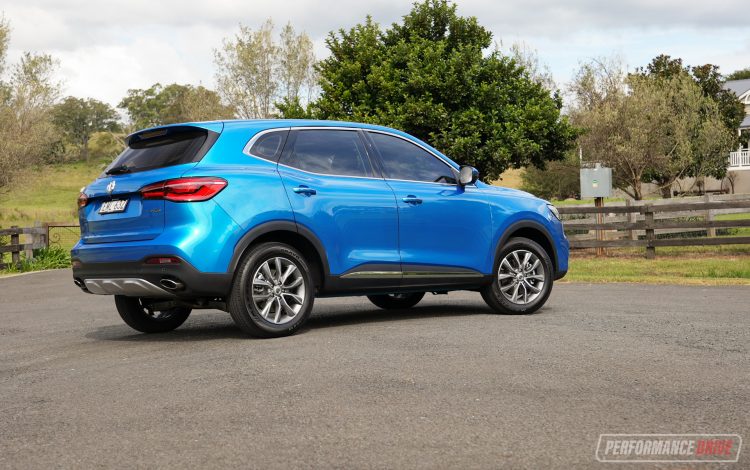 We wouldn’t blame you if you mistook the MG HS as something from Europe. It’s a simple and smooth design theme that looks much more elegant than its price point suggests. The front end consists of a chrome-dotted grille and beautifully crafted daytime LED lamps. There are no jagged shapes or contours, just consistent sheeting that flows to the rear. Black plastic-bordered wheel arches give off a touch of strength and ruggedness. At the rear, the LED taillamps look superb, and they sit flush with the body to create a very neat rear end. The HS’s external design is a real winner in our eyes.

On the inside, the interior is also elegant and minimalistic. There are lots of soft-touch materials, and brushed metal-look surrounds bump it up a class. But it is let down by some niggly exclusions. For example, it doesn’t have rear air vents, the front seats lack lumbar bolstering, the multimedia screen is a decent size but too bright at night, and the menu layout is missing small features and customisations, like radio text display. 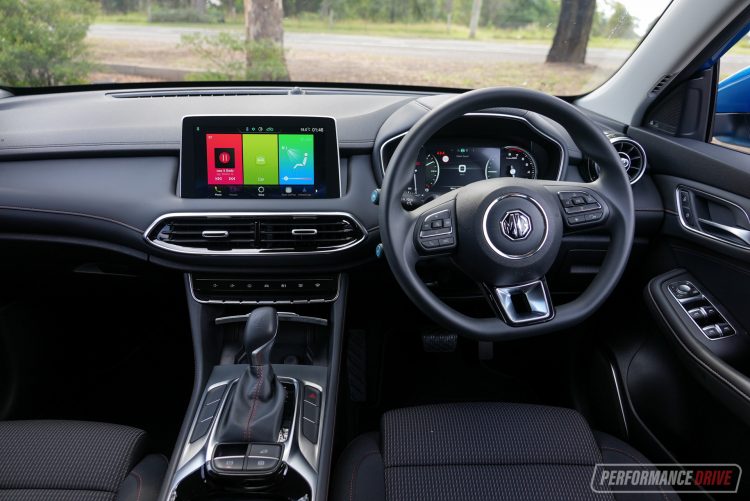 With regards to interior space, there is an ample amount of room for four adults, or two adults and three kids. There are large door pockets and other handy spaces scattered throughout the cabin. Getting in and out is made easy thanks to the generous height and that elevated seating that we all seem to like from SUVs.

Measuring in at 463 litres, the boot provides a commendable amount of space. It is quite shallow though because there is a huge space for a spare tyre under the floor. But it is wasted space because it only comes with a space-saver spare. Officially, the boot is slightly bigger than the Mazda CX-5’s 442L, but smaller than the Toyota RAV4’s huge 580L, and smaller than the new Hyundai Tucson‘s 539L. 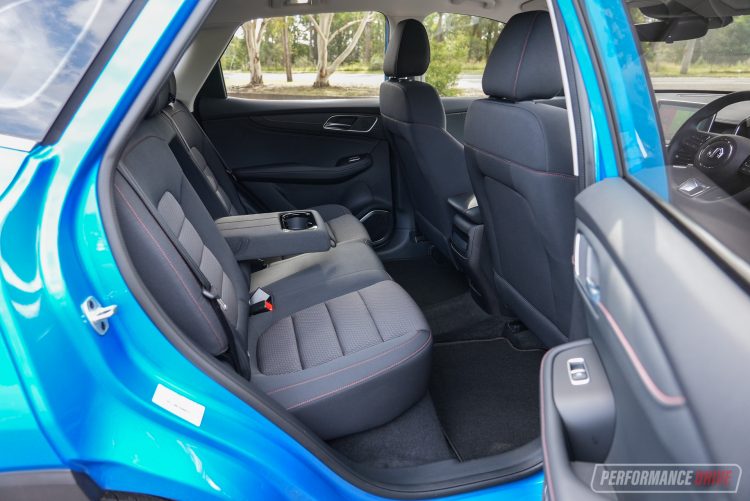 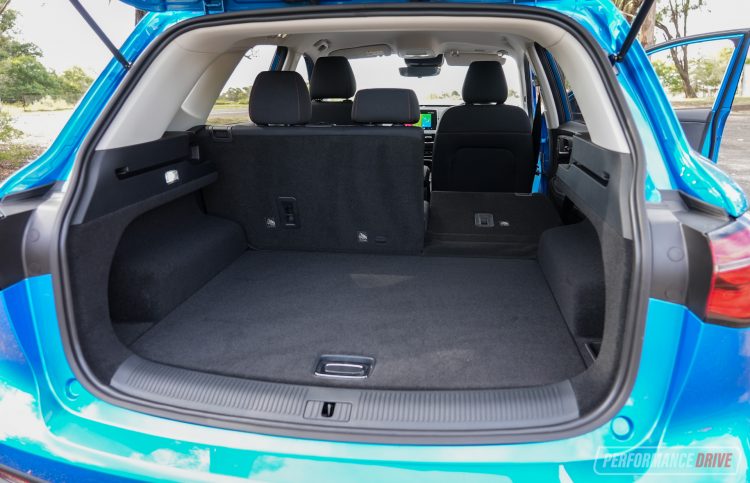 The most surprising thing about the MG HS when driving it is how quiet it is on the road. Road noise is impressively mute for an entry-level SUV.

In order of surprise factor, the engine is next on the list. MG has succumbed to the pint-sized trend and have created a small but willing 1.5-litre turbo. Don’t let its size fool you. It pumps out 119kW (although some specs say 124kW) of power and 250Nm of torque. It feels eager and keeps up with traffic flow with ease; helped by the fact that it only weighs 1489kg. When pushed harder, our testing revealed a 0-100km/h time of 8.97 seconds. Only high in the rev range does the engine start to sound a little harsh and thrashy. At 88dB during peak 60-110km/h performance, it is noisy.

It takes a little getting used to its power delivery too. Having a dual-clutch gearbox allows for quicker gear changes under demanding acceleration. But in this seven-speed, we found it to be a tad jerky and confused under light acceleration. And the power level never seems to be consistent; sometimes it bursts out like you’ve just floored it, and other times, with the same throttle position, it really lags and bogs down. You can adjust your driving style and compensate and anticipate, somewhat. 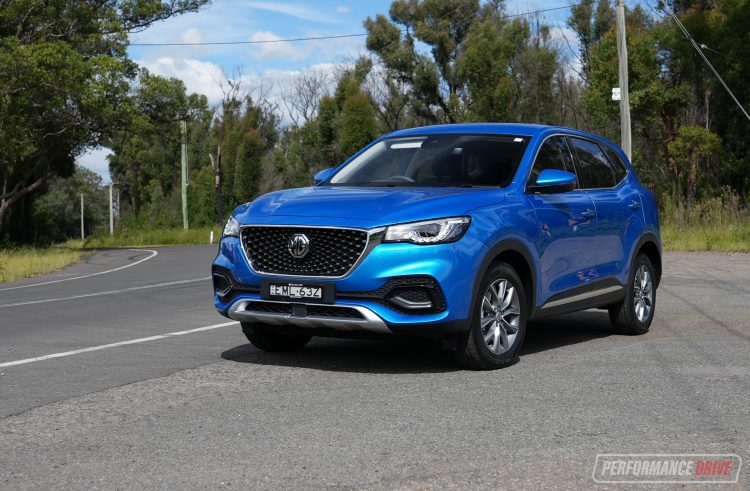 Those seven gear ratios help keep the engine revs low at higher speeds. This means fuel consumption is decent on the freeway. But it is not enough to bring the overall average down to what you would expect from a 1.5-litre. The official combined average is 7.3L/100km, but we couldn’t get any lower than 8.3L/100km with our mixed city/freeway routes. This had to be calculated manually as there is no long-term average display in the dash – only the current engine-on cycle’s figure. It’s not a brilliant result for a front-wheel drive. We would expect this average from an all-wheel drive setup. Notably, a minimum 95 RON fuel is required.

In terms of driving dynamics, the HS is predictable but sloppy. There is noticeable lean in corners, with a longish suspension travel making it feel a bit uneasy during constant left and right S-bends. But it also means it can absorb big bumps with comfort. Only when you hit multiple bumps in a row does it start to feel unsettled. 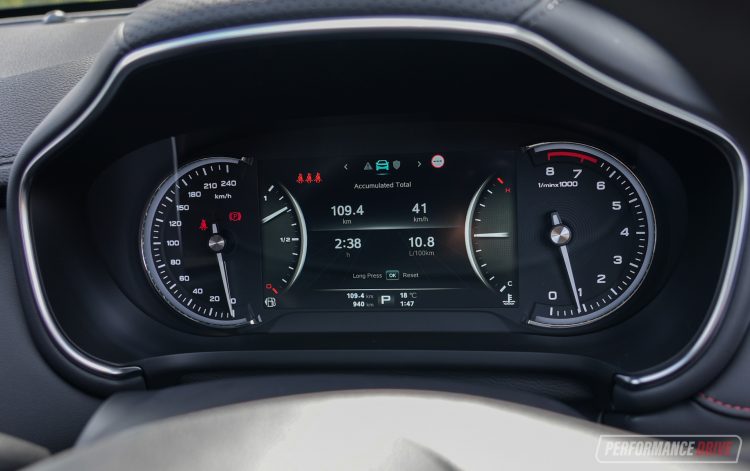 The steering is quite light, and there is a decent amount of feedback, which makes it easy to drive. As a result, it seems its natural habitat is around town as opposed to open roads and out in the country.

If reliability is a lurking question over your conscience, MG offers one of the most generous warranties on the market; seven years and unlimited kilometres. But servicing is required every 10,000km or 12 months, which is tad more than average among today’s standards.

We hope there is no buyer out there attracted to the MG HS purely because it is an “MG”. It resembles nothing of the old British trademark, especially in terms of driving character and overall personality. We hope it’s the competitive pricing, elegant exterior design, and practical interior that attracts instead.

Chinese-built cars are slowly getting better and more appealing, and the MG HS has a fair crack at this tough segment. There are just some oddities that might mean nothing to some because of its affordable price, but they add up to be a big deal for us. If improvements were made to the multimedia screen, the jerky gearbox and acceleration, and fuel consumption, it could achieve bigger things.