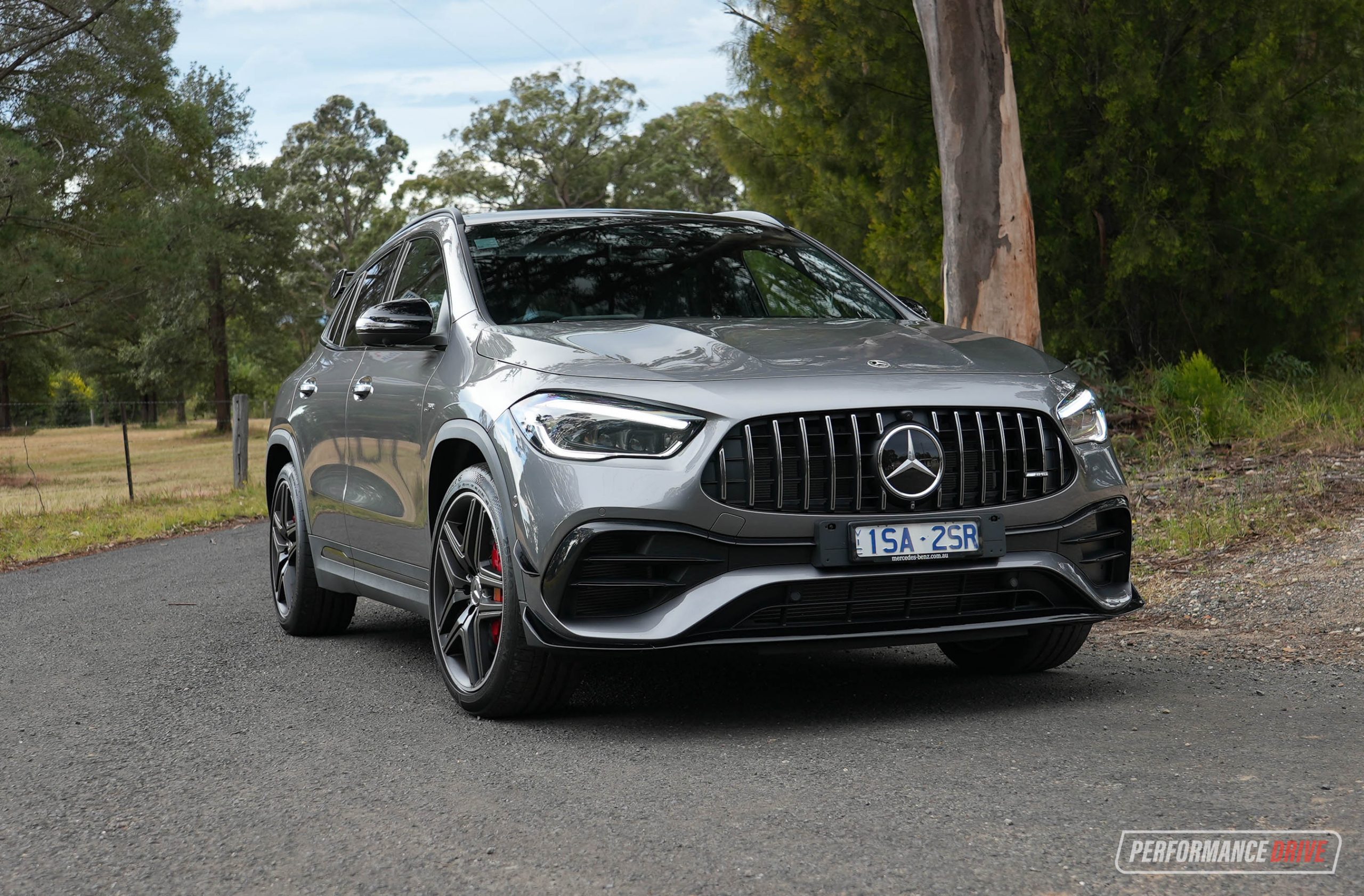 It’s not often an SUV comes along that features the world’s most powerful four-cylinder production engine. Let alone an innocent small SUV. That’s right, the 2021 Mercedes-AMG GLA 45 S has a CV that grows far beyond the school drop-off or weekly shop. You can now get that mouth-watering power seen in the AMG A 45 S hatch and receive extra SUV ground clearance that motorists can’t seem to get enough of. 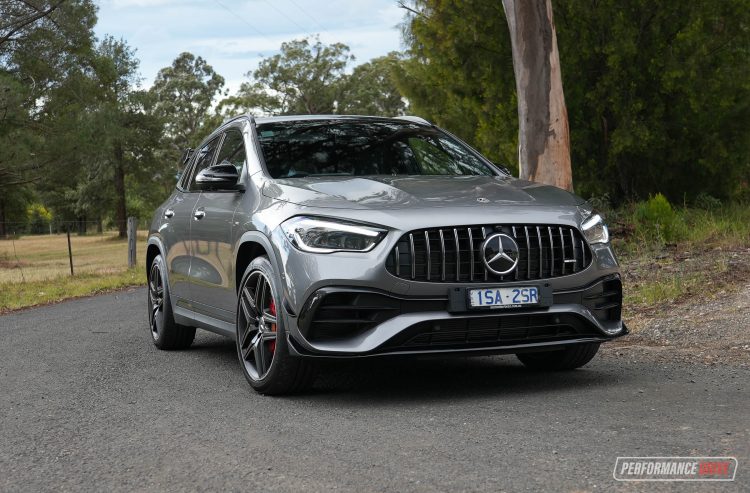 Driving enthusiasts Down Under are offered the full, double-glazed, cherry-on-top AMG. The 45 S. It unleashes an epic 310kW of power and 500Nm of roaring torque from a milk-carton-size 2.0-litre engine. Needless to say, it sits at the very top of its class for speed and power. The only competitor that gets close is the Audi RS Q3, which develops 294kW/480Nm, but it does that with a 2.5-litre five-cylinder engine. Yep, this is nuts. 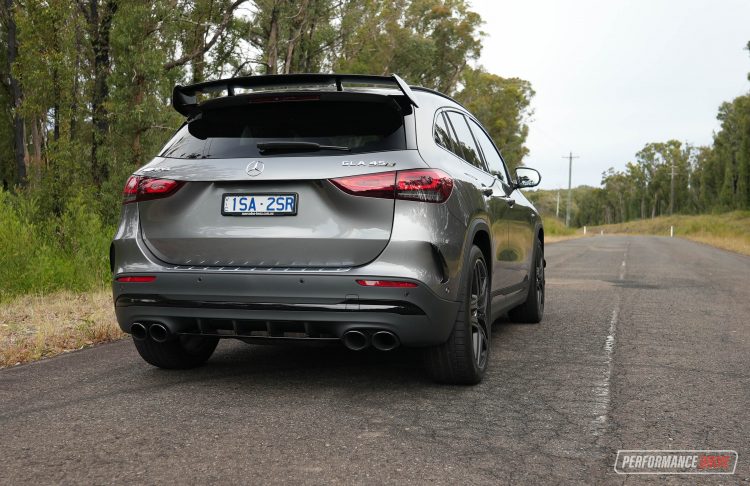 From afar, the fast Merc almost looks like a hot hatch in its overall rounded shape. Suspension travel is minimised for handling performance, which leaves less gap in the wheel arches. It follows the latest sleek design from the German marque. Contours are smooth to convey aerodynamics for speed. The front struts a mean vertical chrome grille with that prominent three-spoke star badge in the middle.

You could almost say it is a minimalistic design approach with an unsuspecting athletic agenda. Much less pimped out than the smaller AMG A 45 hot hatch sibling, in our opinion. Huge 20-inch wheels and low profile 255/40 tyres contrast brilliantly with red brake calipers that peep through like a hardcore racing machine. 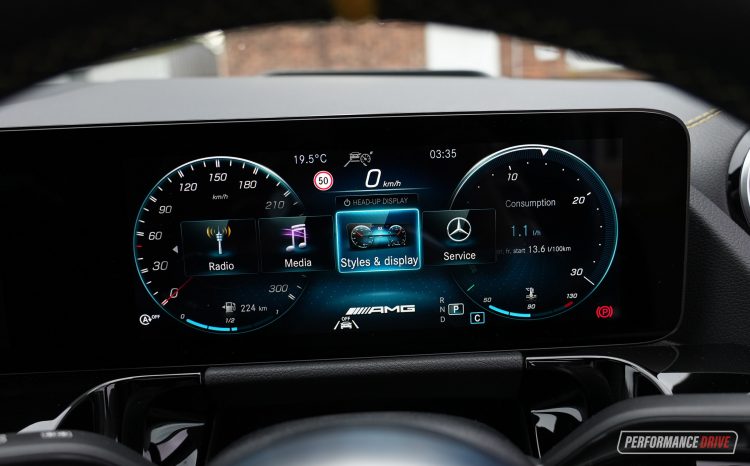 There is also a lower unpainted plastic section around the entire car to remind you it is an SUV. At the rear, that smooth sheeting continues with flush LED taillights that dazzle at night. And there are subtle quad exhausts further down.

The interior is decorated with sporty elements to match the engine’s performance. We love the circular brushed aluminium air vents that look like little alloy wheels, and they glisten with your chosen ambient lighting colour at night (64 colours to choose from). There are also various brushed aluminium panels on the steering wheel, door trim, seat headrests and dash.

A super-annoying design miss is a rattle from the front passenger seat belt buckle that taps against the long hard plastic panel on the B-pillar when not in use. It sounds like a fussy comment to make, but it is loud and infuriating. Fortunately, there is a hidden magnet under the leather to secure the buckle. 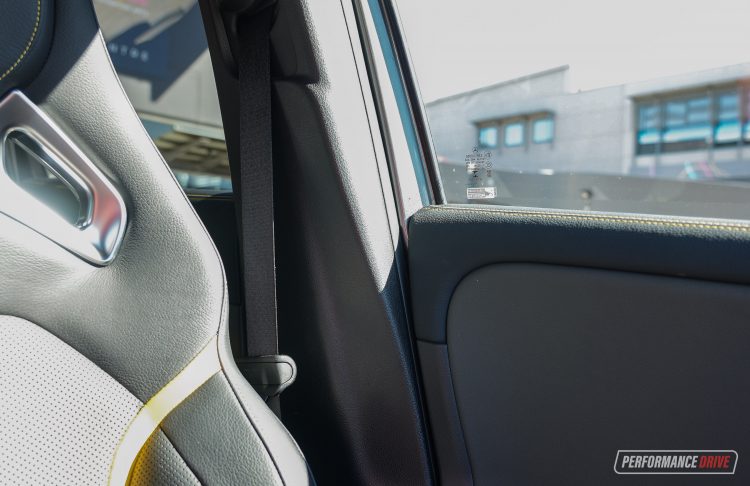 You also get high-res flashy tech on board. Like a pair of 10.25-inch screens for the infotainment and digital instrument cluster. The centre screen is controlled by a trackpad with haptic (vibration) feedback. The yellow font used in the instrument cluster matches yellow striping in the racing seats to emphasise its athletic capabilities.

Of course, you’re not forced to have bucket seats. You can option for others. There are many configurations to choose from, including a comfort seating package, and different colour combinations. 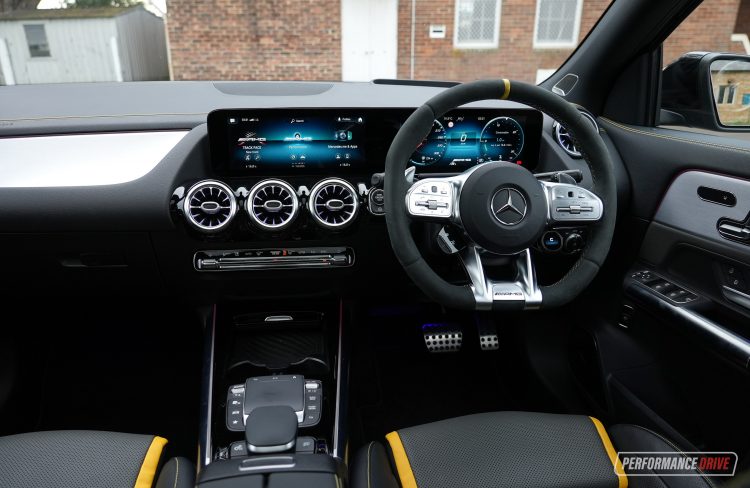 A nifty innovation called ‘interior assistant’ provides contactless operation of the interior. It detects and interprets your hand and arm movements. For example, if you reach over to the front passenger seat, the interior passenger spotlight turns on automatically. It can differentiate between the driver and front passenger so that you reach the menus you wish to use more efficiently.

In terms of space and practicality, the only areas where you feel like you’re in a sports car are if you opt for the sports bucket seats. The rest is as practical as your typical small SUV – and these are the reasons one would opt for this over the A 45 hatch. There is plenty of room in the front, and lots of spaces to park your belongings. Getting in and out is also made easy thanks to the extra 42mm of ground clearance over the A 45 AMG (153mm in total). 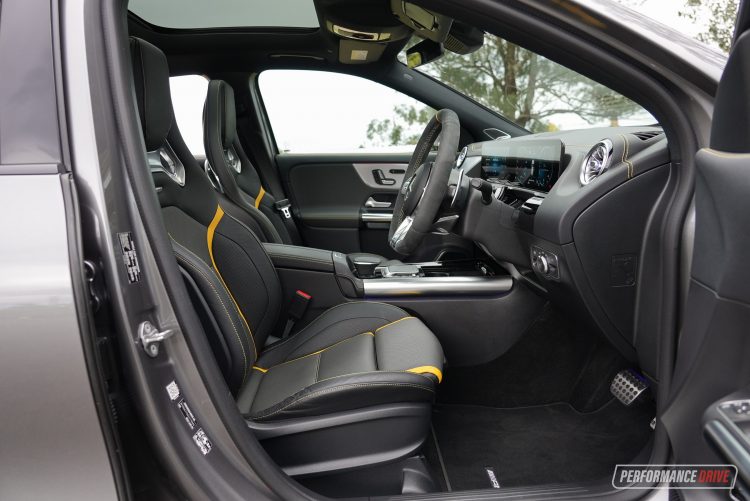 The second row is also surprisingly airy. There is a decent amount of legroom and headroom for this class. The standard seats are on rails too, which helps offer more room where needed. Cup holders, rear air vents and charging points ensure rear passengers are not neglected. Boot space is also generous, with 435 litres made available, or up to 1430 litres with the rear seats laid down. 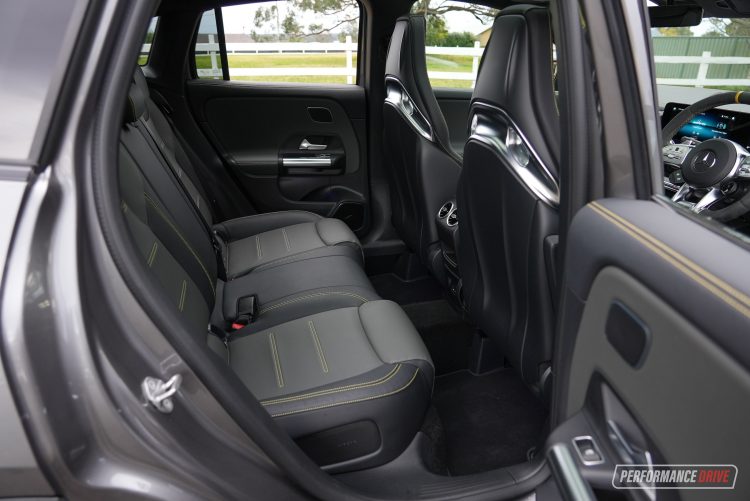 There are also loads of customisable colours, wheels, and additional packs you can add on to suit your tastes and lifestyle. 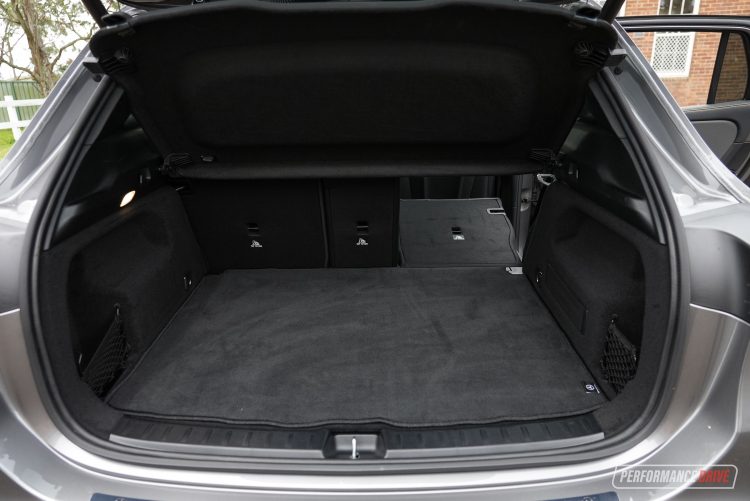 Now to get down to business. It deserves to be mentioned again that under the bonnet lies the world’s most powerful production four-cylinder engine. And it’s truly remarkable to think that 310kW of power and 500Nm of torque can be extracted from a single turbo (big one) 2.0L engine. Behind the wheel, it’s straight out hair-raising. If you’re daring enough to plant your foot, your neck slams into the head rest and it eats up the tarmac with a sense of urgency that’s second to none. Before taking a breath, you will have run out of road or reached the boundaries of the law. It’s a set of wheels fit for the track.

The 0-100km/h sprint is achieved in a mouth-watering 4.3 seconds, officially. Our testing revealed a best of 4.43 seconds using the launch control function and a GPS Vbox data-logger. Without launch control, the best we saw was 5.56 seconds. You lose about 0.4 seconds over the A-Class hatch version because the hatch is nearly 200kg lighter – this has a sizeable tare weight of 1807kg. The closest competitor, that Audi RS Q3 mentioned, does the 0-100km/h sprint in a claimed 4.5 seconds. It has less power and torque but is about $15k cheaper. 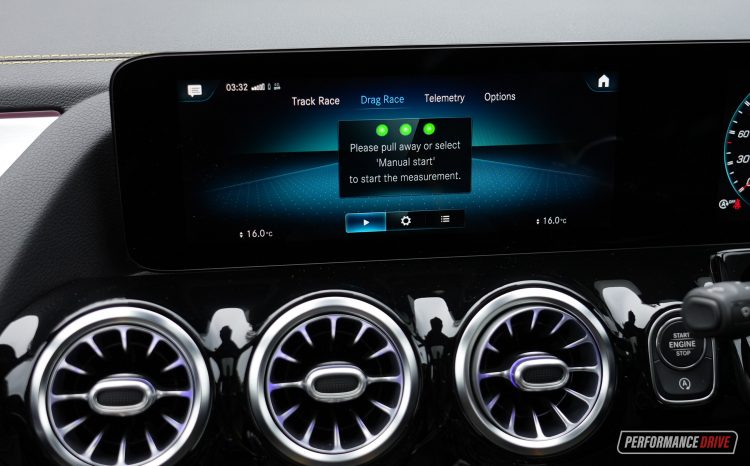 There is an exhaust button on the steering wheel that amplifies its sound. Whack it in this mode and that mighty snort during gear-changes and deceleration definitely turns heads. Even when driven gently, the engine has a deep, harmonious hum that grabs people’s attention, but it is gentle enough to live with every day.

Power is sent to all wheels via an eight-speed dual-clutch automatic transmission. Even though it is programmed for high performance, it does not exhibit any roughness or snapping into gear. In performance modes, gear transitions are sped up to eliminate any delay. In the normal modes and left in D the transmission is well-manner for a dual-clutch, and smooth enough to support comfortable commuting.

Prospective buyers of high-performance vehicles like this AMG are unlikely to be deterred by fuel consumption. But if you are, the GLA 45 S varies lots depending on your driving manner. Its official average is 9.6L/100km. Our average didn’t fall below 10.8L/100km during our week. Though we were having fun with its abilities much of the time. Deservedly so, it requires a minimum 98RON petrol. 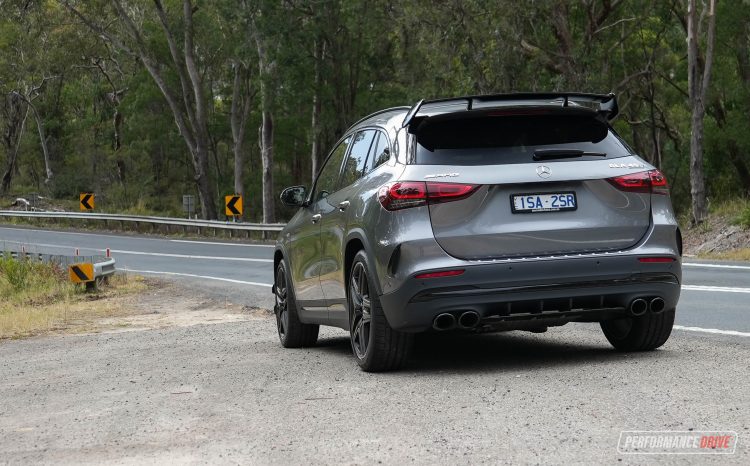 Even though you sit higher in the GLA 45, body roll is virtually non-existent. There is also an abundance of grip. The electronically adjustable dampers make it even more taught when sport mode is selected. You can swoop through corners fluently and confidently. Steering is also perfectly targeted and appropriately weighted. And it becomes even tighter when in sports modes. Those handling abilities can keep up with that tight steering, too.

Obviously, going over bumps will cause your wobbly bits to bounce more than non-performance-oriented SUVs will. But not in a rough, crashing manner that we were expecting. Bumps are tapered out to get rid of any sudden thud. They are more of a smooth bounce, in the normal modes. And it’s all customisable to your preference of course. Those low-profile tyres mean you should probably stick to the bitumen. They are not made for really rough dirt roads with ruts and large rocks, for example. 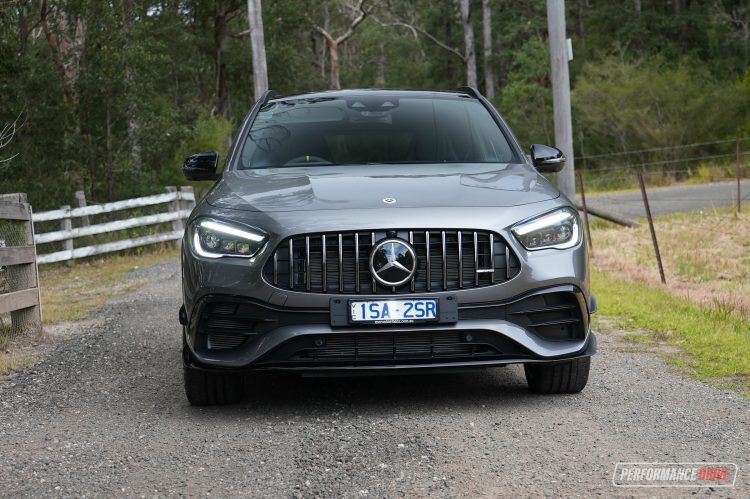 On first thought, the idea of a high-performance small SUV would be an oxymoron to some. Generally, a vehicle that is higher off the ground and biased towards practicality would not be the same vehicle that scores the title of featuring a record-breaking engine. But the AMG GLA 45 S manages to execute this brilliantly. You can still have a practical interior with room to move inside and have heart-racing performance.

We also love how Mercedes-Benz has turned the appearance of the GLA 45 down a notch to make it an unsuspecting beast. Great for those who like to blend in with the crowd but still crave performance. The interior’s unseen new tech and sophistication is also a standout. But far out, that tapping seat belt issue becomes annoying quickly. Even though there is a hidden magnet there, if you buy this car, we recommend investing in some adhesive foam tape or option up to a better trim pack.

PROS:
– Record-breaking engine means quickest & most powerful SUV in its class
– Practicality is not compromised to get that performance
– Adjustable dampers provide optimum balance between comfort/sportiness
– New ‘interior assistant’ tech is impressively clever