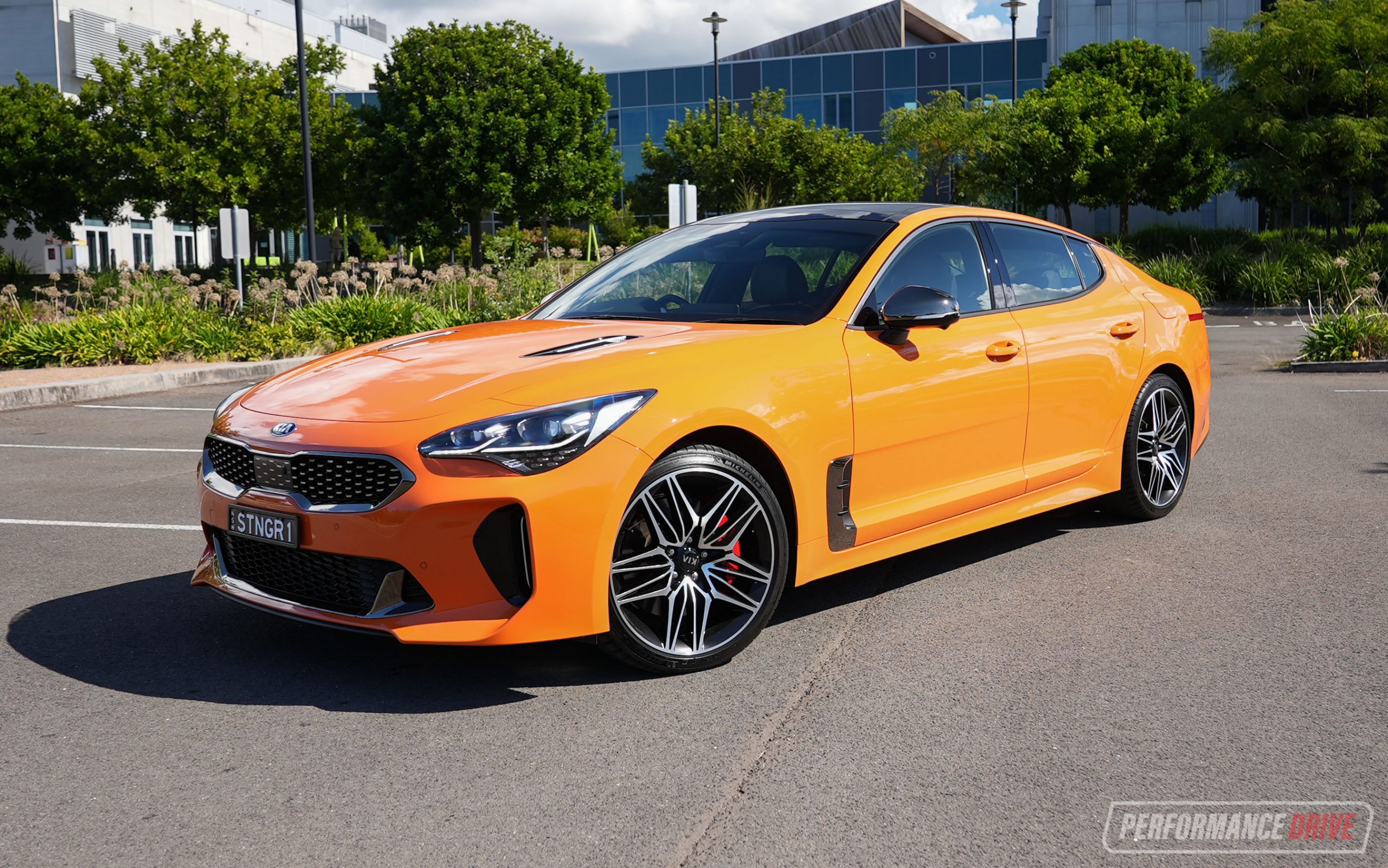 The Kia Stinger has been around for a while now, but it hasn’t really taken off in terms of sales in Australia. Perhaps because it competes in the sedan segment, which is just trickling along lately in the face of overwhelming demand for SUVS. 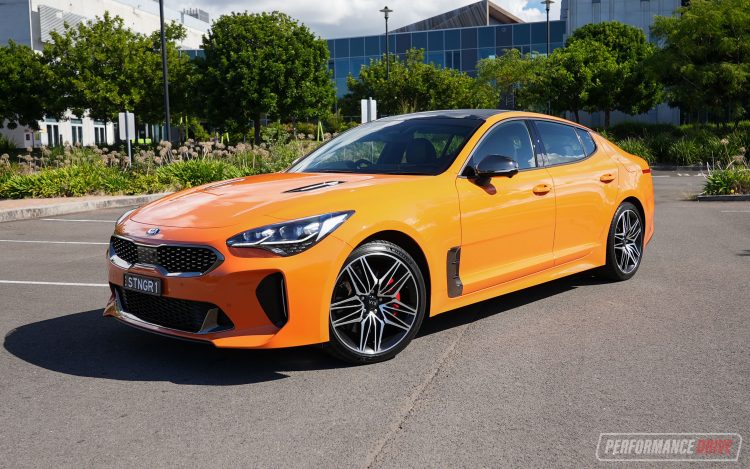 So far this year Kia Australia has sold 778 Stingers (through May). That’s up 28 per cent on the same period last year, although the coronavirus pandemic obviously impacted there. In the year prior, Kia sold 770 examples in the same five-month period. In its first full year on sale (2018), 896 units were sold in that same timeframe. Suffice to say, the trend is rolling down a gradual slope.

Kia introduced some updates for the 2021 model to help freshen it up and reinvigorate its spicy appeal, mainly sprucing up the areas of safety, tech inside, and installing subtle design tweaks. For example, there’s a new full-width LED taillight across the range, incorporating a turn signal grid pattern. Wheel designs are also refreshed. These are the main telltale clues. 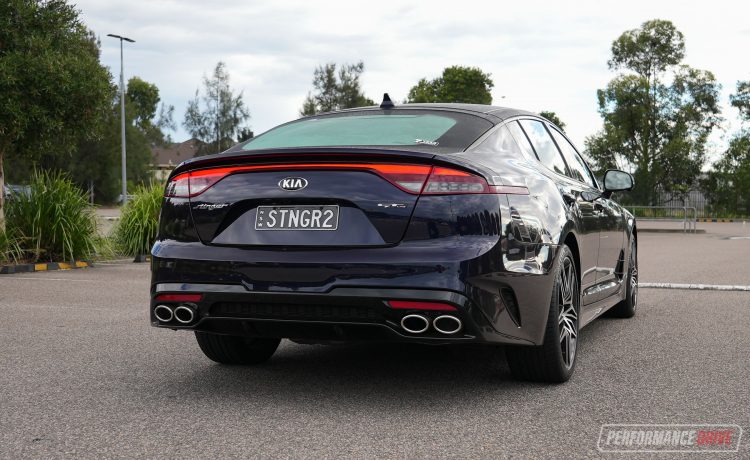 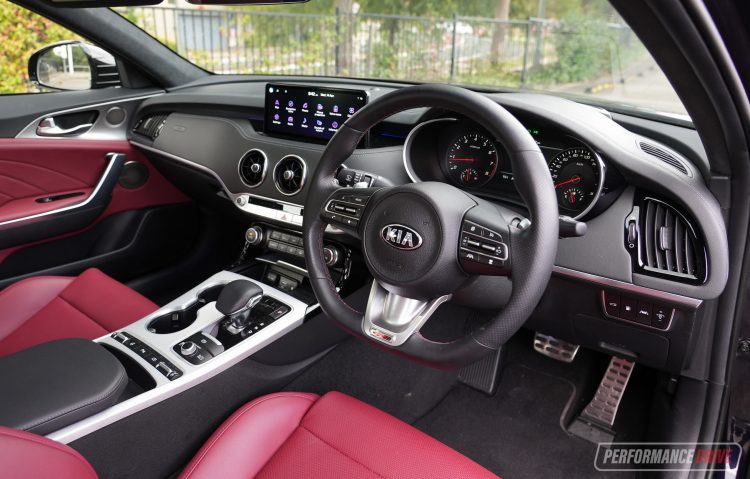 The interior remains as a very pleasant and modern place to sit, with nice metallic design touches giving it a quality look, while practicality is maintained at a high level, in sync with Kia’s reputation. We love the soft yet supportive sports seats in the front (same on both variants here), and the new 10.25-inch touch-screen is a welcome addition for 2021.

There’s loads of standard features, too, like heating and cooling for the front seats, electric adjustment, a sunroof, wireless phone charger, and semi-digital instrument cluster with a 7.0-inch display surrounded by two mechanical dials. Tyre pressure monitoring, head-up display, and a surround-view parking camera are also standard on both the GT-Line and GT. 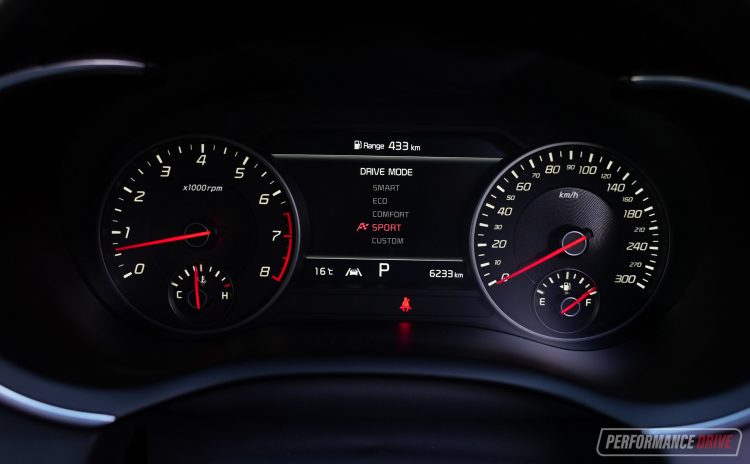 The GT adds a sporty display menu for the cluster screen, exclusively including real-time torque, oil temp, and a turbo boost gauge. Either way, we think this area is starting to look a bit old now, especially as mechanical dials are being phasing out by most manufacturers.

Rear passengers are treated to their own charging ports, climate vents and temperature adjustment, and big comfortable seats on the reclined and contoured bench. It feels like a proper luxury car from back here, although you do have to bend right down to get in. Legroom can get a little confined if the front passengers are tall, but overall, it’s a pretty spacious cabin for a grand touring fastback. 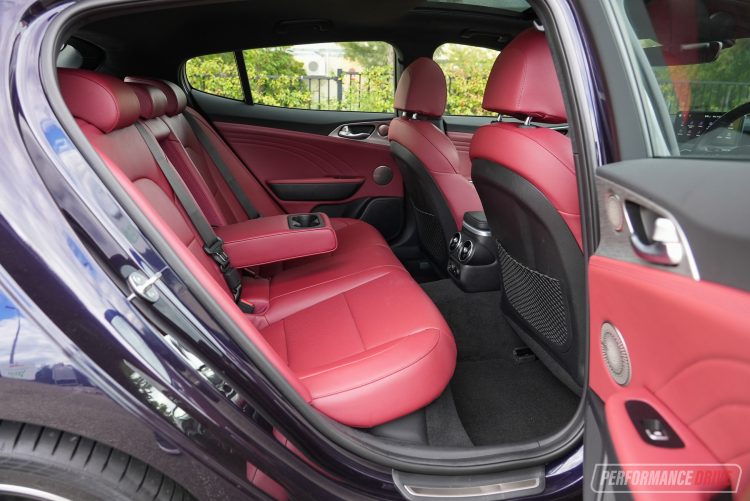 If you’re thinking of buying an SUV because you like the idea of lots of boot space, the boot in the Kia Stinger is far from small. In fact, it’s about the size as a mid-size SUV, offering a volume of 406L. And you have the convenience of flip-down rear seats like in an SUV, and a gulpingly-large hatch lid.

With the rear seats folded down Kia says you have 1114L at your disposal. There’s a space-saver spare wheel under the floor in both variants, along with a tiny bit of extra storage for those delicate/secretive items. 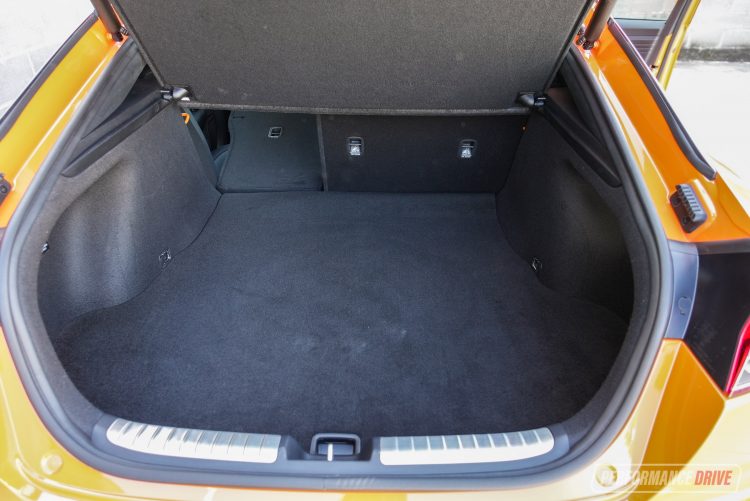 No changes are made underneath for MY2021, including for the suspension, but Kia has introduced some new-look alloy wheel designs as mentioned. Both of these variants share the same new-look 19-inch wheels, while the GT-Line uses the older-spec Continental ContiSport tyres and the GT gets slightly grippier and superior (in our opinion) Michelin Pilot Sport 4 tyres. Both use 225s on the front and 255s on the back.

As before, all Stinger models in Australia are rear-wheel drive and feature the company’s own eight-speed automatic transmission (it’s not a ZF unit, as some may think). The GT-Line also comes with a limited-slip differential, like the GT. Unlike the GT though, the 2.0L does not breathe through a bi-modal sports exhaust. This is a new system for the V6, and it seems a touch quieter than before. According to our decibel gauge, the sound now peaks (60-110km/h full throttle) at 88dB inside the cabin, down from 89 before. Idle noise is higher, though, at 45 versus 44. 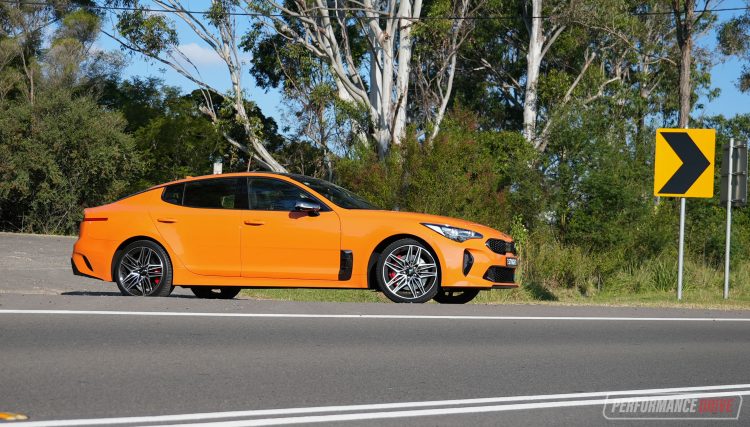 Of course we all want the flagship GT with the twin-turbo V6. But what if you don’t really care about absolute speed and power? Well, the 182kW/353Nm 2.0-litre turbo-petrol four-cylinder in the GT-Line is more economical and produces fewer emissions. The official average consumption rates are 8.8L/100km for the 2.0T and 10.2L/100km for the V6. Combined emissions are 201g/km versus 239g/100km. For fleet and company car buyers, the 2.0L will probably get a pass from HR on the common 200g threshold.

We actually like the way this car handles with this lighter weight engine. It feels more agile, and it can be more fun to drive on spirited roads. You’re able to explore its full potential without going too fast as well. In other words, you can actually nail the throttle and really have a go. But not only that, the nose isn’t as top-heavy, so it darts into corners with no after-shock or kickback. 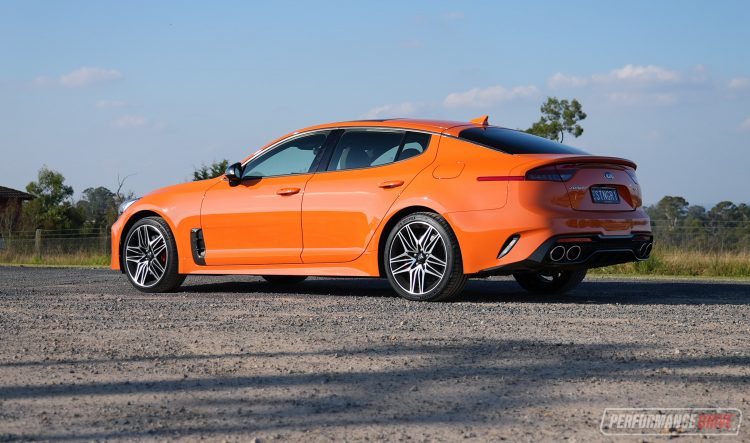 Both variants come standard with a limited-slip differential, and you can provoke mild, gradual-initiating oversteer. More so in the V6 of course as you can rely on the 510Nm of torque to get things started. It’s also able to maintain a slide in a more controlled manner. In the 2.0L, you have to try a bit harder, which can make you look like a bit of a peanut.

The V6 does come with Brembo brakes, however, both variants pull up from 100km/h in around 38 metres, according to our tests. As you’d probably expect, the Brembos can withstand more of a beating, resisting fade and maintaining good pedal feel for longer. The Brembo setup clamps 350mm front discs while the standard calipers bite down on 320mm front discs (340mm and 314mm at the rear, respectively). 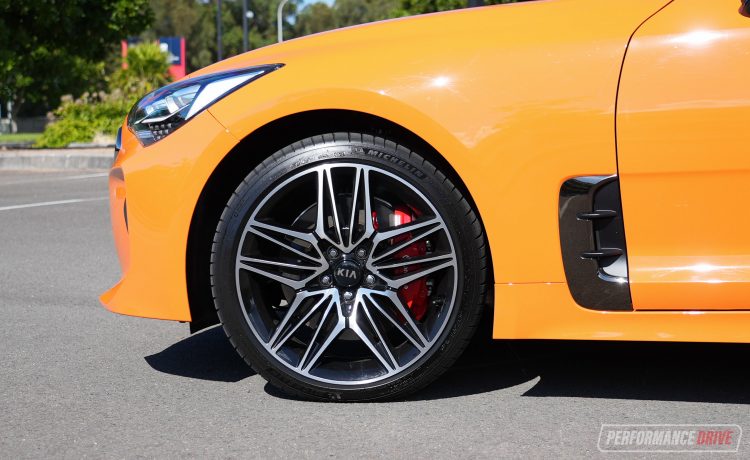 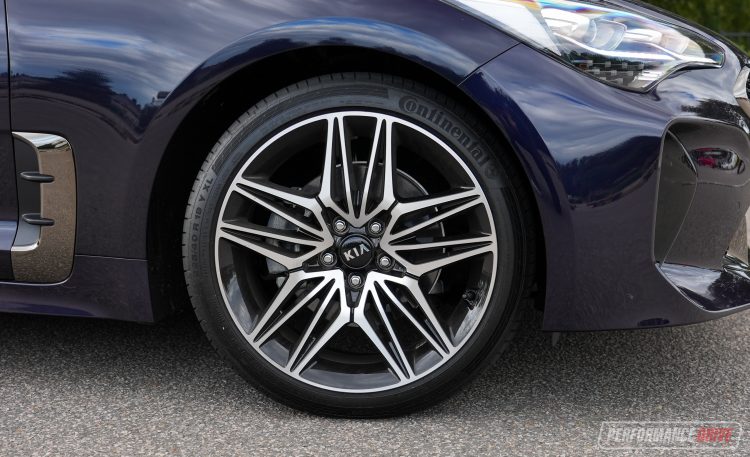 Like our previous test, we were not able to get near Kia’s official 0-100km/h claim of 6.0 seconds in the 2.0T, despite conducting six different runs with the Vbox. Our best result this time was 7.77 seconds, improving on 7.89 in the MY18. Interestingly, we notice the specs say this new model has a tare weight of 1720kg, compared with 1693kg before.

The times might seem slow, however, out on a nice bit of road the engine performs just fine. It offers good response, and you get plenty of that addictive surging torque that we all desire with turbo engines.

Kia has boosted the V6 to extract an extra 1 kilowatt of power for MY2021. You obviously can’t feel this out on the road, but as before, the Stinger GT offers exceptional performance. Putting the boot in from around 50km/h provokes an almighty shove. The transmission knocks back a gear and the rear end squats, squirming for traction with road-ripping heave as it soars to the national speed limit in virtually no time. 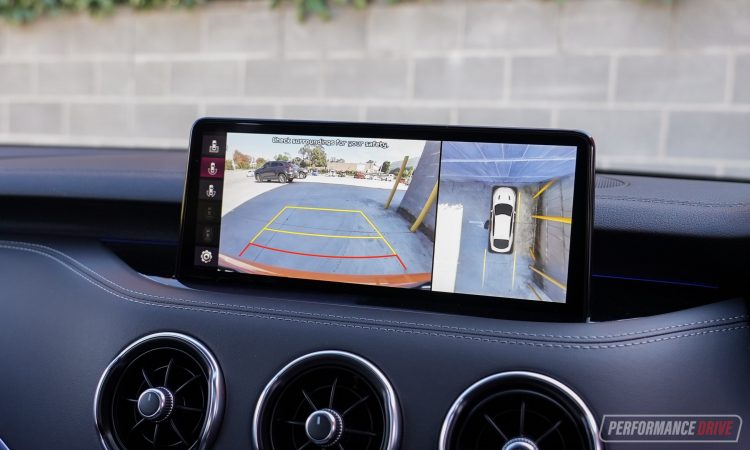 Despite conducting a handful of tests on a private road with the Vbox, we couldn’t quite match our previous best time that we got in the MY2020 GT, of 4.84 seconds. This time the best we found was 5.20 seconds. This could be down to anything, such as fuel quality, temperature, or even wind speed/direction. We notice the new model is about 13kg heavier too, but that’s hardly going to make a difference.

The Kia Stinger remains as an attractive and thoroughly enjoyable sports sedan. It has a sense of stately refinement about it, yet it’s also very practical and covered by Kia’s famous seven-year warranty. We like the GT-Line and it’s lighter-weight four-cylinder engine, as it honestly feels more playful and manageable on the road. If you lust for that twin-turbo V6 power (and soundtrack) though, we aren’t going to try and deter you.

On that note, it is awesome that Kia Australia is able to offer both. You do save around $10,000 going with the GT-Line, and the 2.0L is kinder to the environment and your wallet during visits to the petrol station. But not by much. Either way, you’re going to enjoy it.

We look forward to seeing if Kia will introduce an all-new model in the years to come. Maybe it will be replaced with that insane EV6 GT?