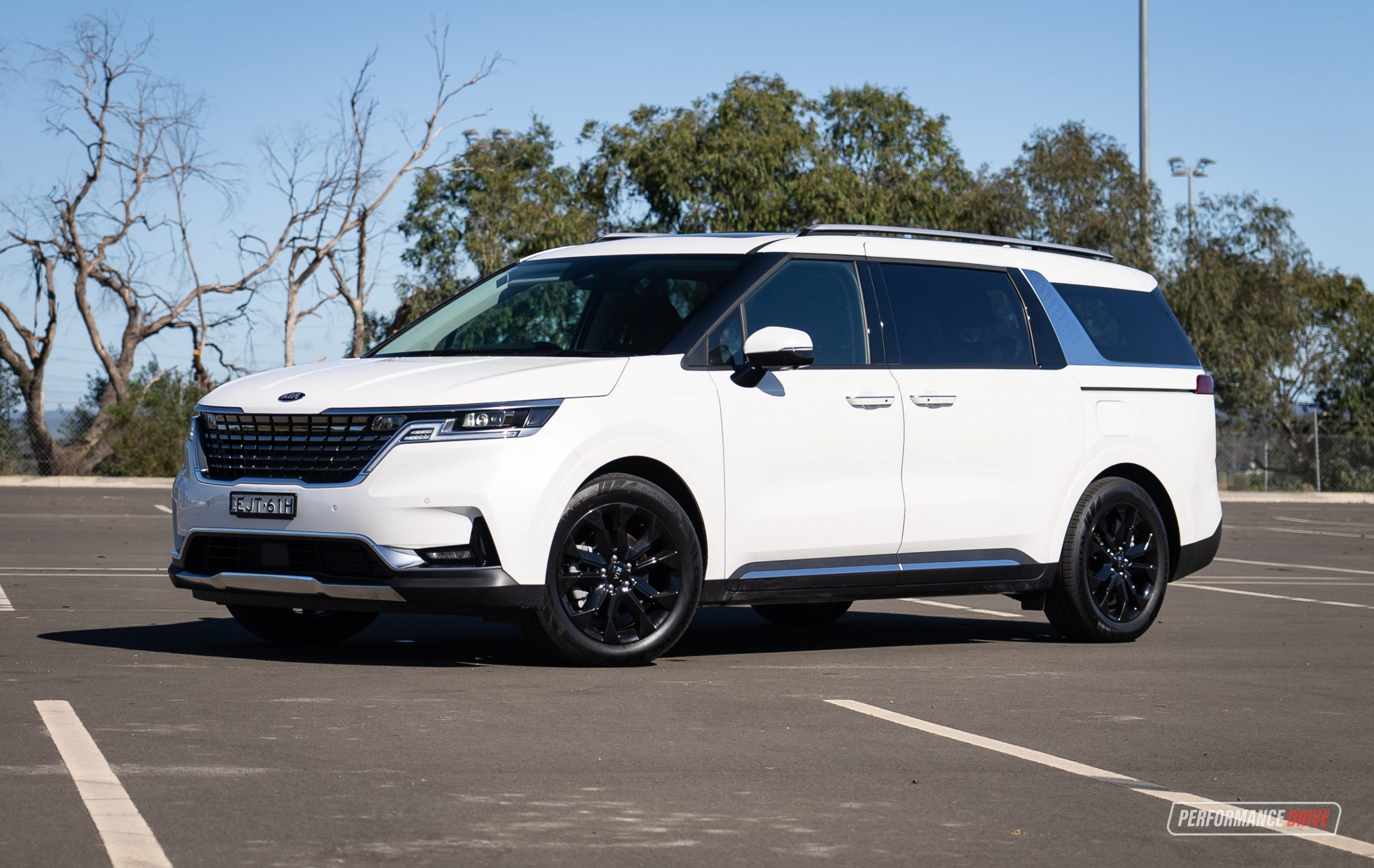 You’ve got your heart set on a 7-seat SUV because you think they’re big? Try stepping into the lounge room that is the 2021 Kia Carnival. Now this is big. If you have a family of seven or eight, you must check out one of these. 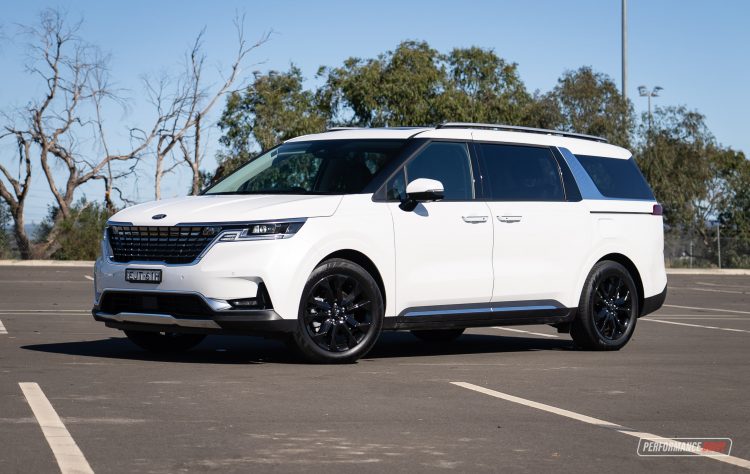 This segment – “people movers below $60,000”, according to the Federal Chamber of Automotive Industries in Australia – is dominated by the Carnival. So far this year the local arm has sold 2321 examples according to April VFACTS figures. That’s more than quadruple the sales of its nearest rival, the Honda Odyssey (465 units), and almost 10 times the sales of the outgoing Hyundai iMax (266 units).

Over the past three months the local arm has sold 606, 616, and 657 examples, respectively, indicating a clear upward trend for the new model. That’s up from 442 in January which was when the new model launched. In December, just 119 examples were sold, likely made up of only the old model and perhaps a handful of the very first registrations of this new model.

Here we’re testing top-of-the-range Platinum variant. It features a 3.5-litre petrol V6 option, which is not the one you should go for (we’ll explain later), as well as all the bells and whistles not only offered for the Carnival but from Kia at the moment. 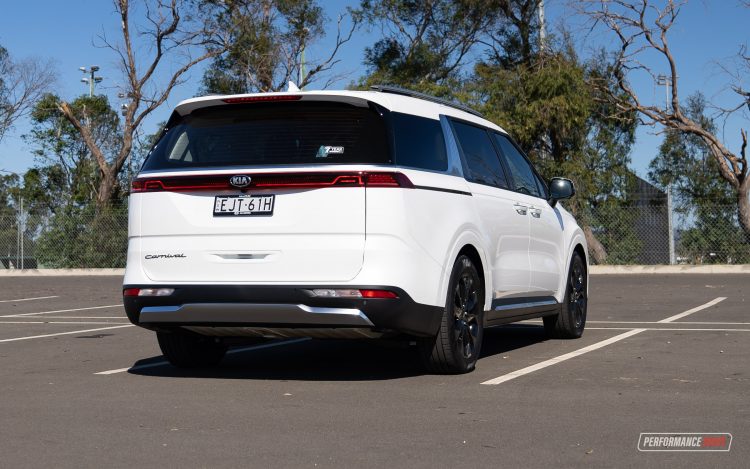 This is the best-looking van, ever. Obviously just an opinion and a bold statement, but we’re sticking with it. Look at it. Cool, chic, smart, and sporty all rolled into one. We think Kia has done such a superb job on the design that it has significantly reenergised the MPV segment, and reminded us all that these prequels to the large SUV and crossover are still around and relevant.

That’s a bold claim as well. We’ve essentially just judged a book by its cover. But then you step inside and see, ah yes, Kia has done a fantastic job in here as well. Open the electric-sliding side doors and it’s like being greeted by high-end hotel staff as they open the room for you (from what I’ve seen in the movies anyway). It’s not just the light cream tones that make it feel open and spacious, there are some quality detailed touches in here. Sculpted interior door handles, a unique backlit decorative panel on the front doors, and beachwood-style trim pieces across the dash all give it a real premium feel. 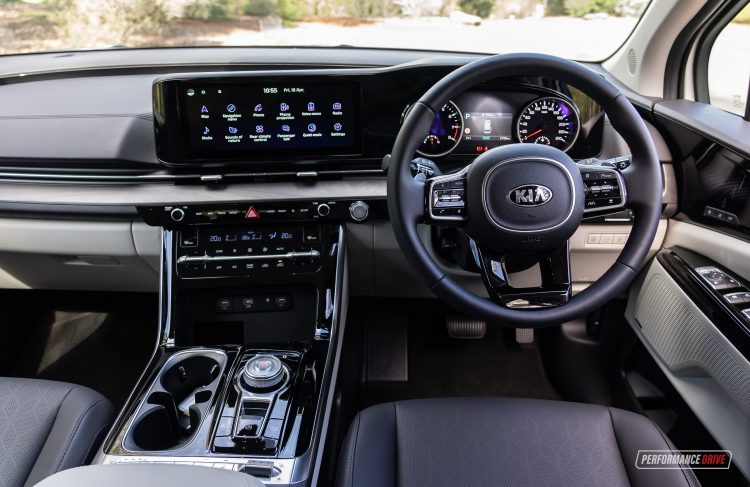 The Platinum comes with a 12.3-inch touch-screen media interface packed with Android Auto and Apple CarPlay, digital radio, and satellite navigation. One element we don’t like about the new screen is the menu layout for some tasks. For example, changing the radio station requires opening up a list of options before you get to browse stations or tracks. We’d prefer common operations like this to be more streamlined.

We like that there are plenty of physical buttons around the place and not just every function stuffed into a screen, as what seems to be the trend these days. We think the buttons make it seem even more eventful and full of features, but there’s also the case where you might be more inclined to use the functions in question. It tends to be safer to activate them too, as you’re less distracted by the virtual depth of the screen.

There is absolutely no concern about passenger space in here. Headroom is almost never-ending, and the amount of legroom available is just ridiculous. At the back you’ve got a fully adjustable middle row, so you can slide the bench back and forward to cater for each occasion. Even the third row is roomy and comfortable. It’s so big in here you almost need to yell out for other passengers to hear you. 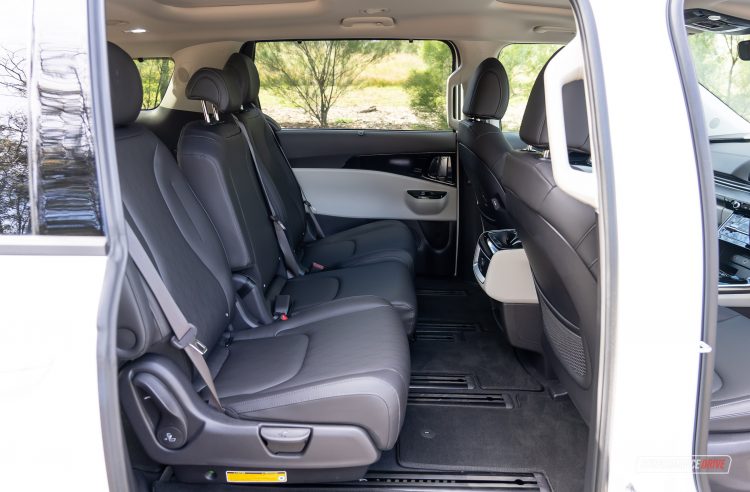 You’ll want to crank up the beats as the Platinum showcases a 12-speaker sound system. There’s also an array of seat heating and cooling options to choose from in the front, accessed via cool barrel-style switches on the console, along with more centre console space than you’ll know what to do with. Twin cup holders, bottle holders in the doors, and seven USB charging ports are spread throughout the cabin to keep everyone happy. Ceiling-mounted climate vents for all three rows ensure everyone is comfortable, too.

Boot space. Do you even have to ask? The specs say there is a minimum of 1139L on hand, expanding to a monumental 2461L with the rear seats folded and tucked away. A 12-volt socket sits on the boot wall along with a number of shelves. 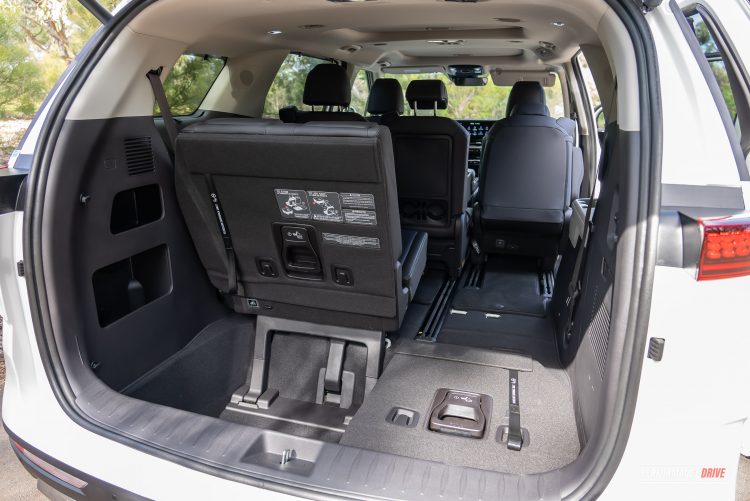 Firstly, we’re going to complain about the V6 but we’ll come back around to its positives. Actually, first we need to say how great it is that Kia does offer the variety of both engines in all trim levels. There are a lot of vehicles on the new car market at the moment that are only available with one engine, or for certain trim levels only and so on.

So, obviously, fuel economy isn’t very good from the V6. This is a new engine as part of Hyundai Motor Group’s Smartstream family, featuring a high compression ratio of 12.3:1, both direct and port fuel injection, variable valve timing, and a new cooled exhaust gas recirculation system. On paper the official average consumption is 9.6L/100km. We recorded an average of 10.2L/100km during our week with this test car.

These aren’t the highest fuel figures around, but they will eventually burn through the hip pocket. And our results were based on using it with very little cargo and, most of the time, just a single person in the car. Load this up like what it is designed for and we’d expect to see numbers towards 11-12L/100km after extended use. For reference the diesel has an official average consumption of just 6.5L/100km. 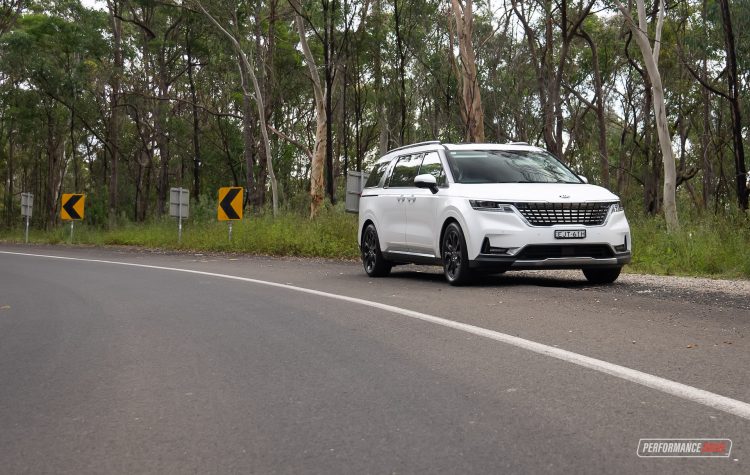 Aside from fuel economy we don’t think this engine is the best fit for this style of vehicle. A great engine on its own, no doubt. But in the big and heavy Carnival (2090kg, tare), 355Nm isn’t much. Peak torque isn’t available until 5000rpm either. That means it needs to rev to get the big jobs done. We’re not sure about you but the idea of fanging a van around at 5000rpm doesn’t seem like the most civilised thing to do. You’ll wake the baby, for starters.

The eight-speed auto tries hard to sync itself up with the engine’s peaky character, shifting down quite early with very little prompting. Then again, the powertrain is clever enough to learn your habits and understand the style of driving you prefer. It’s good that there are eight ratios as well, as they help to divide and spread the small torque window.

As for the good, well, 216kW from a high-revving, naturally aspirated van. That sounds like a bag of fun. In honesty though we love that Kia does at least provide the option of a powerful petrol engine for those that are against diesels and whatnot. There is the argument that petrols can require less maintenance in city conditions where lots of short, stop-start trips are made.

If you do enjoy a spot of enthusiast driving, then the V6 certainly supplies some fun. It’ll spin the front tyres off the mark and scamper off from 0-100km/h in a very respectable 8.46 seconds, according to our tests using a Racelogic Vbox. That’s not slow. In fact, it’s about as quick as an Audi A4 35 TFSI, Peugeot 508 Fastback (8.27), and most importantly the latest Kia Sorento diesel (8.54). 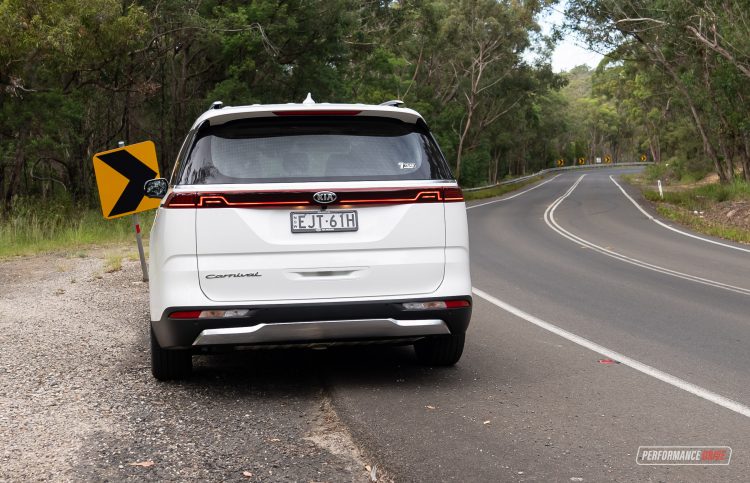 After sprinting along the straights you will inevitably get to a corner of some kind. On country roads and in particular windy mountain passes, the Carnvial seems to exhibit mild body roll on initial turn-in. It will hold its stance at a certain point, however. Switching directions, through switch-back left and right S-bends, for example, the hefty weight does begin to spoil the fun. The body requires a small moment in time to catch up with your steering inputs when pushed pretty hard through some bends. It always feels safe and surefooted, though.

Although Kia’s current TV advertisement shows the Carnival on a race track, we really doubt any owner will want to take their van to the next track driving meet. This style of vehicle is not traditionally or currently designed for that sort of thing. However, the V6 engine does make it more exciting than you might have expected.

Around town, which is where this vehicle will no doubt spend most of its life, it is very easy to thread and weave your way around. So long as you account for the 1995mm width and whopping 5155mm length, parking is also made easy thanks to the huge windows and excellent visibility, and the standard surround-view camera system on the Platinum. 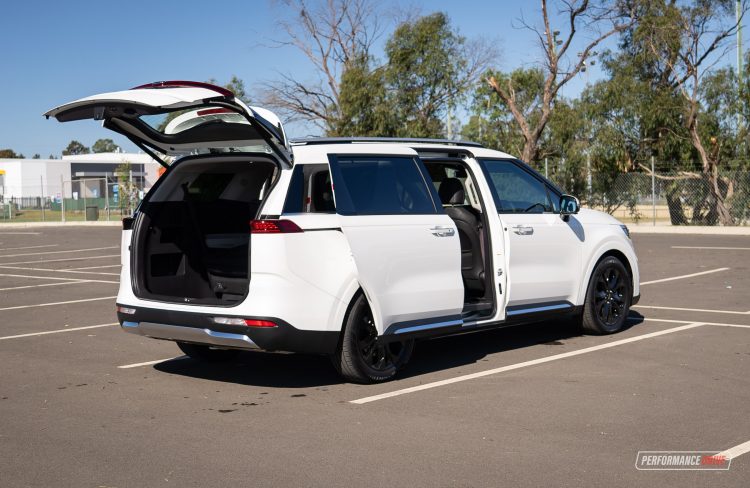 Simply put, if you’re in the market for a large vehicle, whether it be an SUV or a people mover, we give the new Kia Carnival our high recommendations. It more than fulfils its intended purpose by coming feature-packed and fashioning a very attractive design. We’d suggest the diesel option as the higher torque at lower revs should mesh more suitably with the car’s overall nature. There’s also a decent fuel saving to be had.

CONS:
– Thirsty V6, also peaky and not best-suited for this style of car
– The sheer weight becomes apparent on bendy roads