We were shown images of the exterior of the 2021 Kia Carnival last month. And now the company has just revealed images of the surprisingly suave and sophisticated interior.

Check it out. You wouldn’t even know it was an MPV from the inside. One of the first elements you’ll probably notice is the full-width digital screen. It’s made up of two 12.3-inch screens, with one for the instrument cluster and another, touch-control item for the main infotainment suite.

Kia says it has concentrated on improving the quality and design of the interior, no doubt helped by the wrap-around dashboard which blends almost seamlessly into the carved door trims. A new shift-by-wire transmission also allows for an elegant twist dial for selecting gears.

Thanks to a stretched platform that lengthens the wheelbase (by 30mm), extends the rear overhang (by 30mm), and increases the body’s width (by 10mm), the cabin is now even larger than before. Depending on the market region, Kia will be offering seven-, nine- or 11-seat configurations. The popular seven-seat layout uses reclining captain’s chairs for the second row. 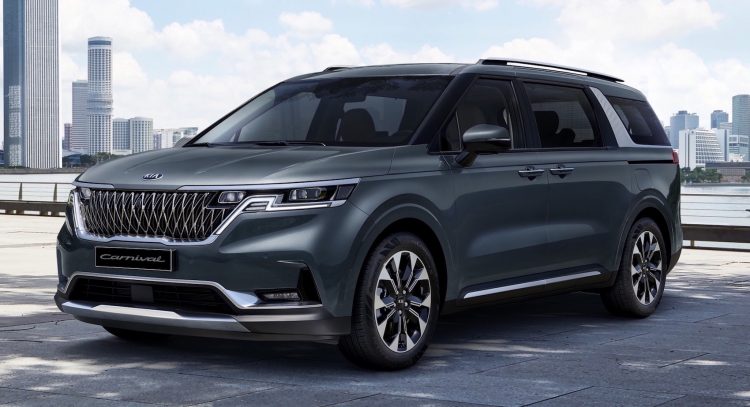 There’s a variety of new storage options introduced for passengers, more charging ports, and netted pockets for devices scattered around the place. Kia also says the cargo area is “best-in-class”, although it hasn’t mentioned the volume at this stage.

Overall the new Carnival, also called the Sedona in some markets, is shaping up to be quite an attractive proposition. Will it be enough to hold off the swarm of buyers merging over to SUVs these days? We’ll have to wait to see how the sales figures look.

During the first six months of this year, Kia Australia sold 2087 examples of the current Carnival, according to June VFACTS figures. Compared with its nearest seven-seat SUV cousin, Kia sold 1435 examples of the Sorento in the same period.

The company confirms the 2021 Carnival will go on sale in Korea during the third quarter of this year, while Australian showroom entry is expected no long after.