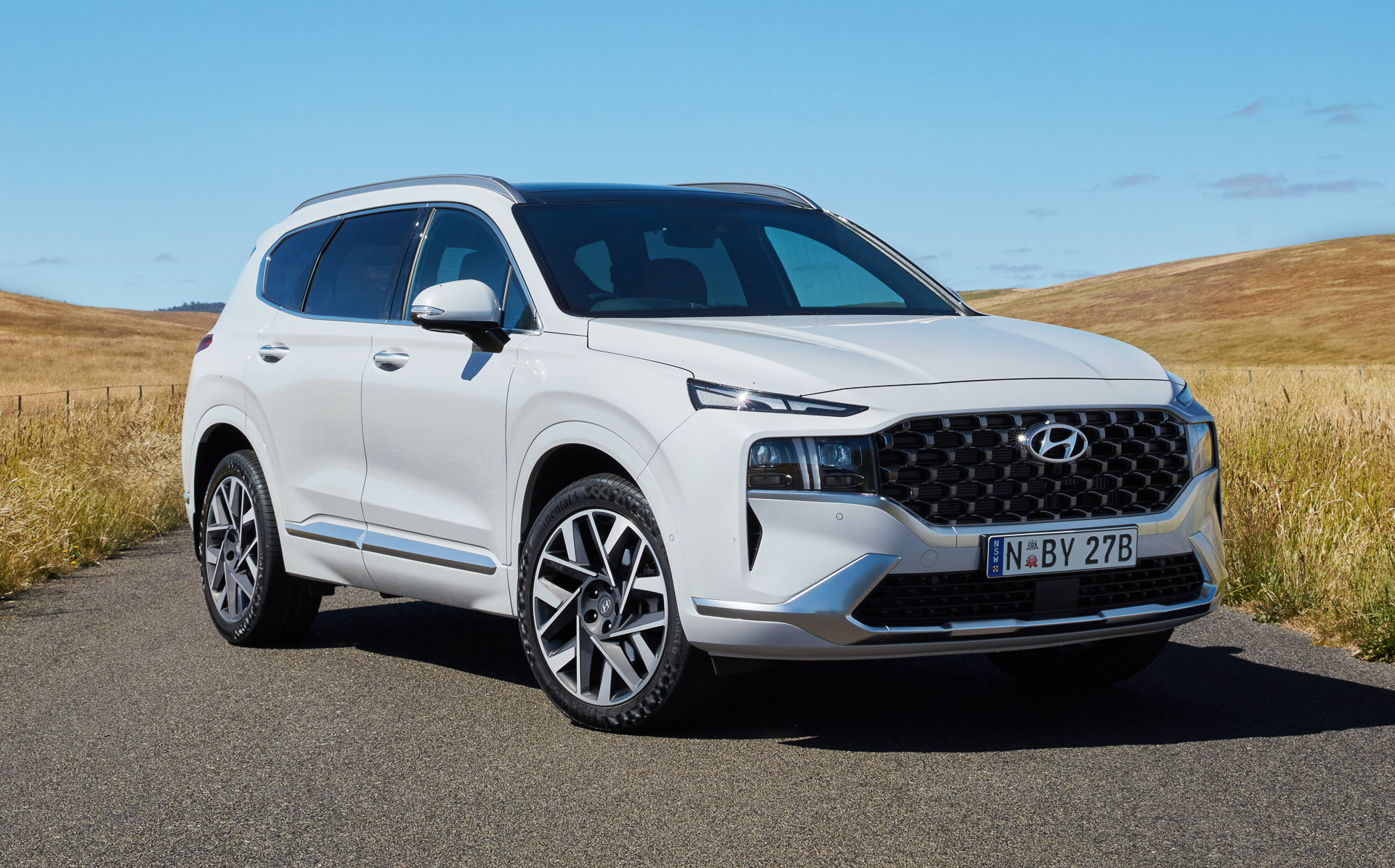 Hyundai Australia is on a product overhaul onslaught at the moment, reeling out new models by the month it seems. And the 2021 Santa Fe is a big one. Not just physically, but a crucial refresh for the brand. 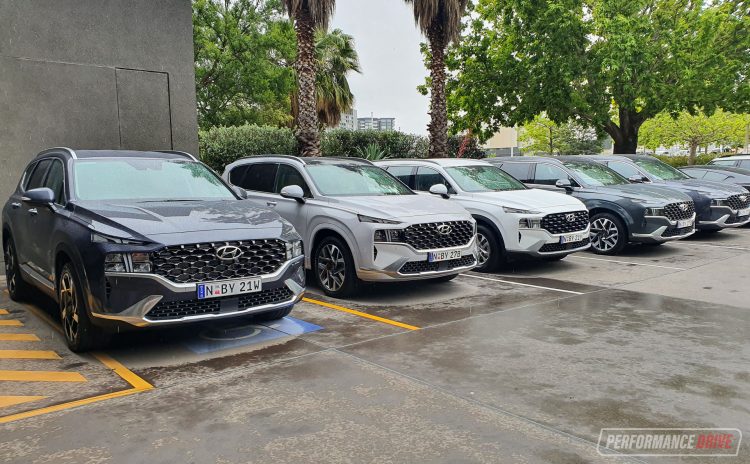 Why? Well, it has just introduced the Palisade which competes in the same ‘below $70k large SUV’ market segment. Prices overlap for some variants, which means buyers could cross-shop between the two. If Hyundai didn’t introduce a big facelift for the Santa Fe, it might have seen sales dwindle.

To make sure there is minimal chance of cannibalisation, the 2021 Santa Fe maintains excellent value for money and affordability. A new entry version (no variant badge) is priced from just $44,700. The previous entry level Active was priced from $43,990. With the latest technology and equipment updates we might have seen that price climb.

The range tops out with the Highlander, from $61,700, with Active and Elite now in the middle. See below for the lineup pricing (excluding on-road costs): 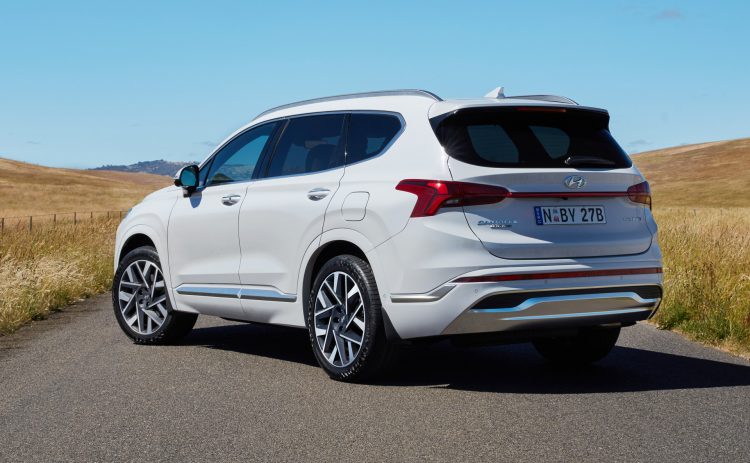 Some updates have been applied to the exterior, largely focused on the front end. Here you might notice the new T-cross headlight and daytime running light arrangement, and a wider main grille than before. But from the side it does present a very similar profile as the outgoing model. Unless you’re looking at the top Highlander that is, which shows off flashy 20-inch alloy wheels. Around at the back it’s perhaps even more similar, but there are some subtle tweaks to the bumper bar to keep it fresh.

Inside, it’s a completely different story. Hyundai has applied its latest 10.25-inch touch-screen on the dash for the Elite and Highlander, and the Highlander gets a beaut new fully digital instrument cluster. Down on the console it looks quite futuristic thanks to a new button-control gear selector system. Shifting (pun intended) from a traditional stick selector does seem to open up space, but it’s the general sense of freedom and movement that is more evident.

We love the amount of cubby holes and pockets around the front of the cabin, including cup holders and bottle holders, along with a convenient spot for your phone in an awesome wireless phone charger slot (your phone doesn’t slide around at all). A big drive mode dial also adds a touch of fanciness. 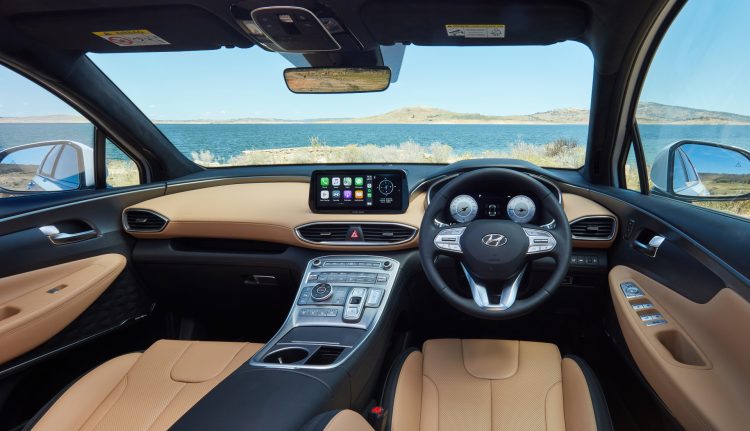 Passenger space in the back is abundant, and the second row slides forward and back so you can prioritise legroom between the second and third row. Yet more USB charging ports can be found in the back of the main console, with climate vents at hand. Flipping forward the second row can be done with the flick of a lever, although getting it back into position takes a bit more effort.

All variants come with climate fan speed control in the third row, which is a superb initiative. Comfort right at the back is about average for this class, and it’s great to see additional cup holders for the third row neatly embedded into the rear wheel arches.

Boot space has grown thanks to a revised platform, resulting in an extra 24L with both rear rows folded down. The old model presented 547L in five-seat configuration, whereas now you get between 571-782L, depending on the positioning of the second row slide function. 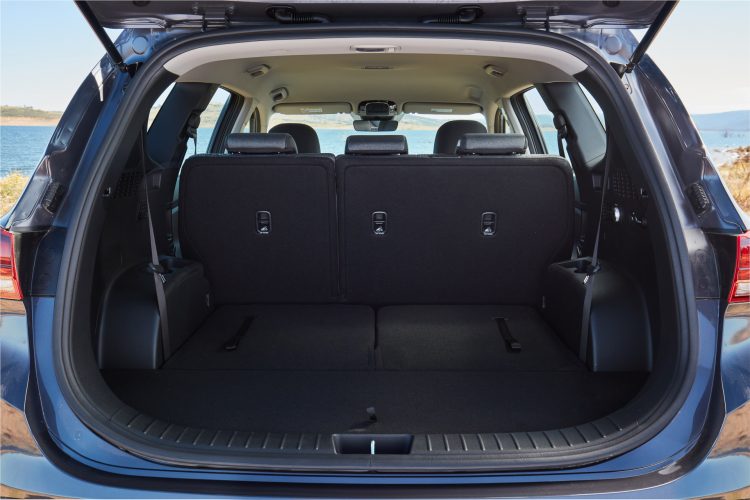 This is a new 2.2-litre turbo-diesel, despite seeming like a carry-over engine. It produces very similar outputs, with 1kW more power, in fact. However, revisions and the introduction of an eight-speed dual-clutch transmission help cut fuel consumption by an impressive 19 per cent. This is now rated at 6.1L/100km on the official combined cycle, while the equivalent outgoing model was rated at 7.5L/100km.

There is a new 3.5-litre naturally aspirated petrol engine available too, which develops a chunky 200kW but only 331Nm. This doesn’t get the new DCT auto, instead retaining an eight-speed torque converter auto. Going for the petrol means two-wheel drive only too, leaving the diesel as the only all-wheel drive option. It’s understood manufacturing limitations are the reason the V6 doesn’t come in AWD, for the RHD Australian market anyway. 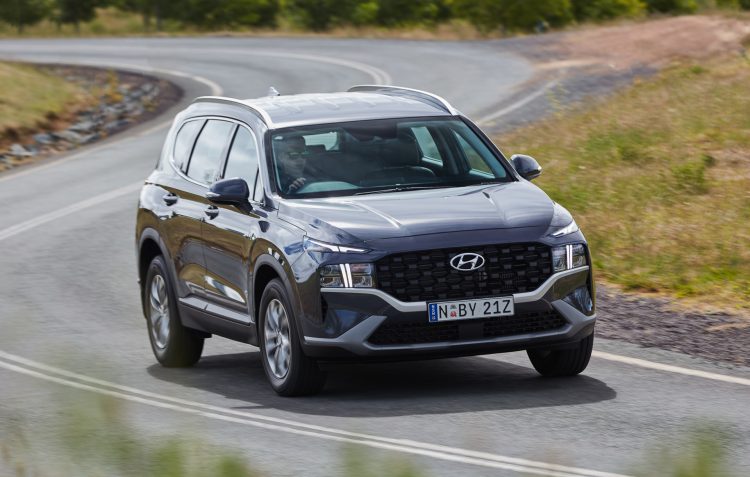 Hyundai steering systems are getting better and better, but there is still some heaviness moving off centre in this and a fairly bland feel in our opinion. And we understand this is not intending to be a sports car, although we notice the steering feel is different to what’s presented in the new Kia Sorento (which we happened to have on test during the same week of this media launch event).

We asked Hyundai about what could be different between the two large SUVs in terms of hardware, given that both new models are based on the same updated platform. However, talking to a Hyundai engineer about a Kia is like asking a girl if her sister is any better than her at dancing. Never a good scenario. Understandably here as well, considering this was a Hyundai event. As far as we know there could be a different steering rack, but more likely just down to overall tuning and calibration. 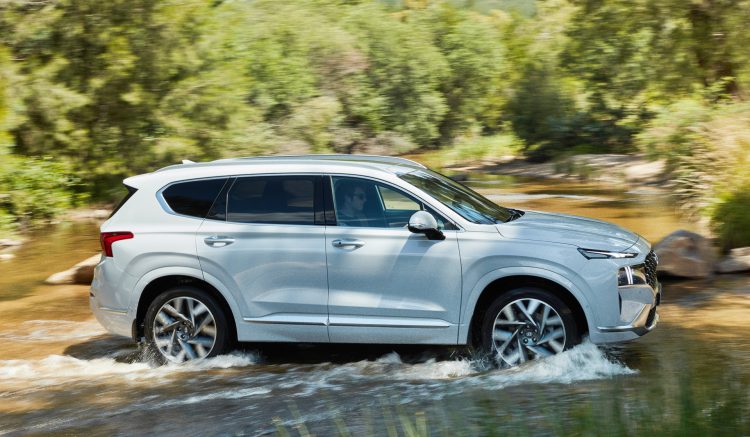 The ride has a certain European firmness to it, but still highly absorbent for Australia’s country roads. This means body roll is kept to a minimum and the vehicle does feel eager turning into nice sweeping bends. Having a slightly tensioned-up setting also means the wheels remain firmly planted, without skipping over corrugations.

Hyundai didn’t have a V6 on hand to test during this event, but we performed some 0-100km/h runs on a quiet and flat backroad with the Vbox. The best result we saw with the diesel was a very respectable 8.60 seconds. That’s about one full second quicker than the old model, according to our past tests.

Performance aside, the diesel is a refined unit and sounds surprisingly good from inside the cabin. There’s ample low-end torque to get things moving and the new dual-clutch transmission has a superb calibration. Kick-down timing is spot on, and the upshifts are smooth yet super-quick.

The 2021 Santa Fe will go down very well with Aussie families. There are plenty of thoughtful revisions applied to the interior that will help keep passengers happy, and there’s more interior space than before with a larger boot. All good stuff. Hyundai continues to offer an excellent yet digestible variety of variant lines too, giving all buyers the opportunity to go with a powerful V6 or a torquey turbo-diesel – a very rare combo in this class.

We do like the interior a lot, and the sophisticated design. The big touch-screen is a welcome touch for the Elite and Highlander as well. Our main concern with the new model isn’t to do with anything specific on the car, but the arrival of the Palisade. That has the potential to steal Santa Fe sales. The Santa Fe’s cousin, the new Kia Sorento, is also a highly appealing package. We guess the good thing about all of this is that there is variety in the first place. Some market regions are not presented with such luxury.