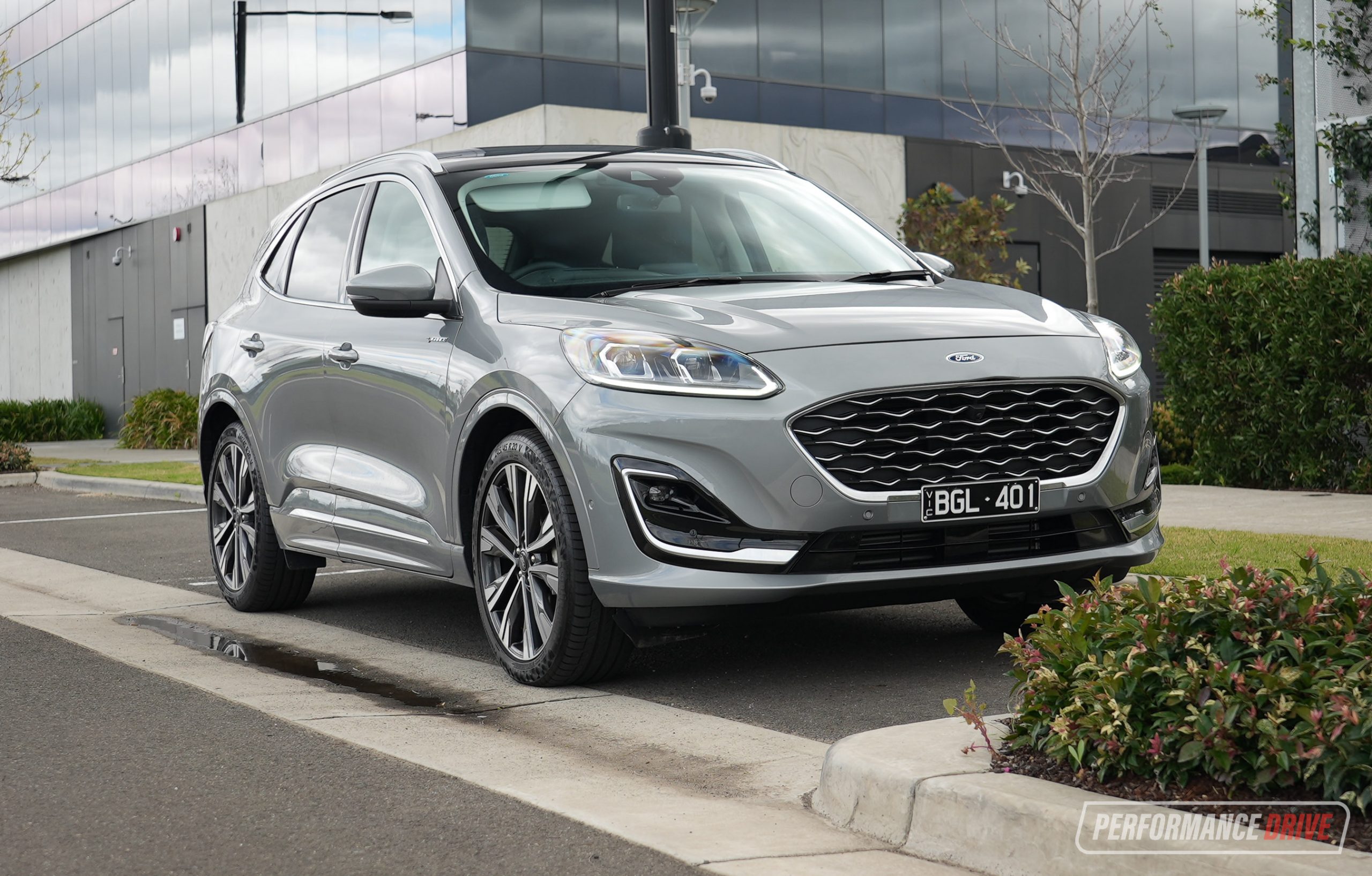 It felt like yesterday when the famous blue oval was consistently one of the top three most popular car brands in Australia. It’s easy to forget that Ford exists after its controversial exit from local production last decade, as the company now only offers seven imported passenger vehicles Down Under. But one of them that should not be overlooked is the mid-sized 2021 Ford Escape SUV. It sits between the Puma and the Everest in terms of size and price. 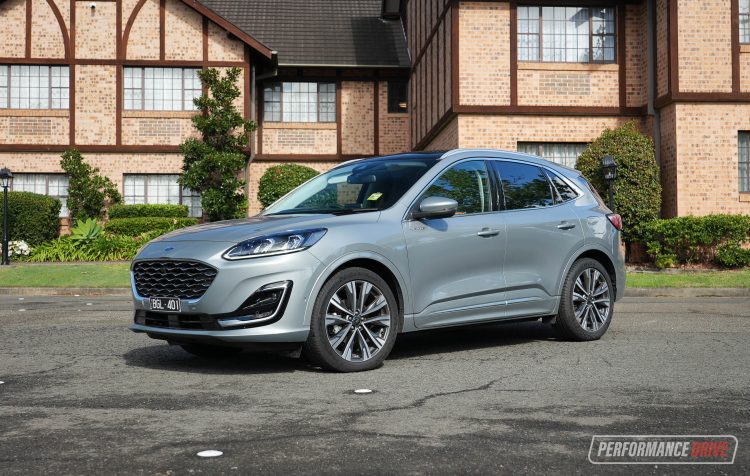 One big reason why it should not be overlooked is that it comes with one of the most powerful engines in this market segment. It is a 2.0-litre turbo-petrol four-cylinder ‘EcoBoost’ engine that produces 183kW and 387Nm. And since the engine is offered across the model range, you can get your hands on it for as low as $35,990 in the no-name base variant (excluding on-road costs).

You can also choose the mid-spec ST-Line and range-topping Vignale. All variants except the base can be chosen with front-wheel drive or all-wheel drive. All are paired to an eight-speed automatic transmission.

If you want to reduce your carbon footprint and fuel bill, there is a new plug-in hybrid option coming soon in the ST-Line trim only. It combines a 2.5-litre petrol engine and electric motor with a CVT auto, producing 167kW.

Here, we’re putting the range-topping Vignale front-wheel drive through the hoops. It retails from $46,590 (plus on-road costs). 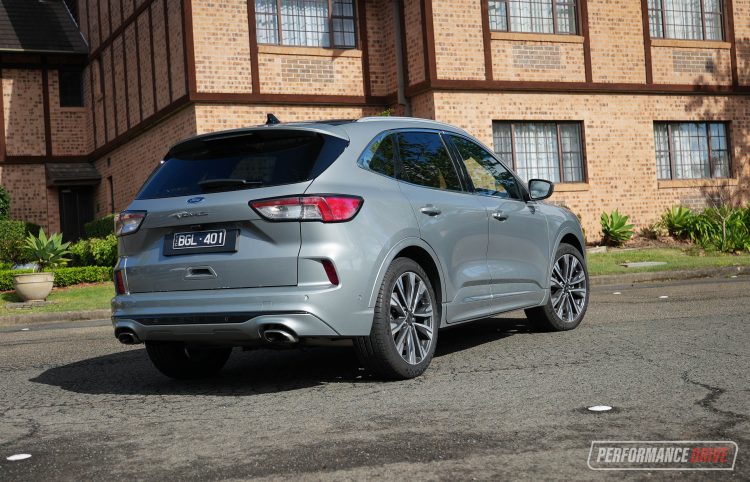 Manufactured in Spain, the 2021 Escape takes on a new design language from Ford. It is a more conservative, simpler, and neater design than the last. The front end encompasses Porsche Cayenne-like large swooping dual-lens LED headlights that flair over the bonnet. We love how the daytime running lights intricately trace around the bottom edge of the headlights. There are some sporty looking ripples on the bonnet and chrome accents on the five-bar front grille. The ST-Line and Vignale feature a weaved glossy black front grille.

The mid-section is rather smooth and picks up some more chrome finishes around the door tops. Then at the rear, large horizontally opposed LED taillights stand out with the word ‘Escape’ embossed through the middle of them. A rear spoiler is fitted to the top of the tailgate and dual exhausts give off an athletic vibe. But we’re not so sure about the look of the heavily protruding rear bumper. It’s less evident in the base model. 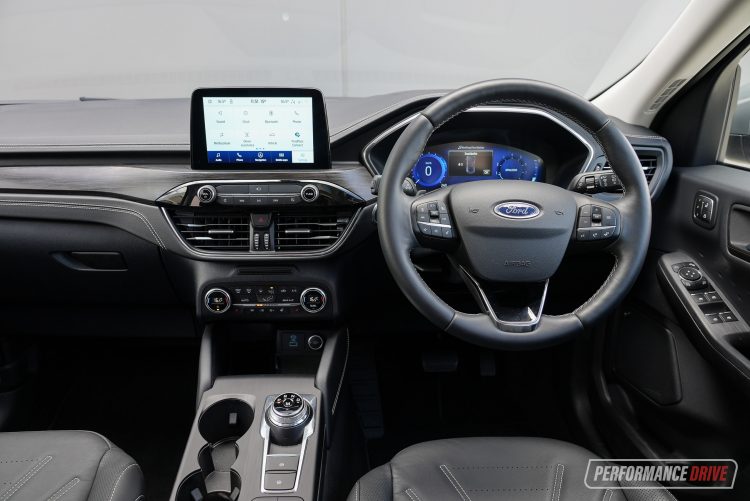 We also have a mixed review when it comes to the interior of the Escape. To start with the good, the layout stands out to be elegant and easy to navigate. We love the clean design, the soft blue lighting – including at the base of the cup holders – the soft start/stop operation of the power windows, and the classy ambience at night.

The practicality of interior is a stand-out too. You get large front door pockets that are long enough to slide an umbrella into, a gear dial instead of a chunky gear leaver, a roomy rear seat that is on rails and recline adjustable, an easy drop leaver of the rear seats accessible from the boot, and rear passengers even get seat warmers, air vents and both USB-A and USB-C ports on the Vignale. 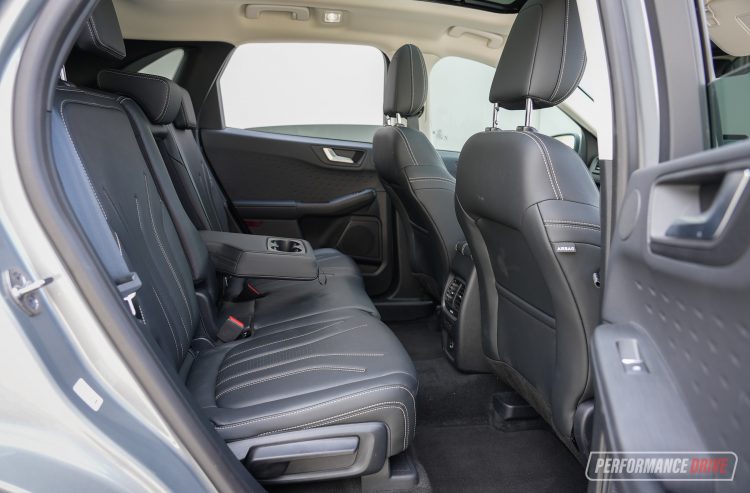 But it’s not all good news, as we have reservations about build quality. For example, the doors sound cheap and hollow on closing – kind of like a rough clatter. We also noticed the imitation chrome finish on the power window switches are starting to chip off on our test vehicle with 6500km on the clock. The mentioned rear seat fold leaver in the boot is extremely flimsy, and overall, many surfaces feel hard and inferior – especially for a top-spec variant. For example, the door skins are made up of plain hard plastic with a basic dimpled pattern.

On the plus side, the fully digital instrument cluster looks great and is large. It has a notably high resolution, is easy to read, and the colour scheme changes as you select different drive modes. You receive Ford’s latest SYNC 3 multimedia system that connects to a punchy 10-speaker sound system, Android Auto and Apple CarPlay. ‘FordPass Connect’ is also included, which enables you to control the car with your phone for things like remote unlock/lock, remote start, and vehicle status. Comparatively, the centre touch-screen is a tad on the small side, at 8.0 inches. 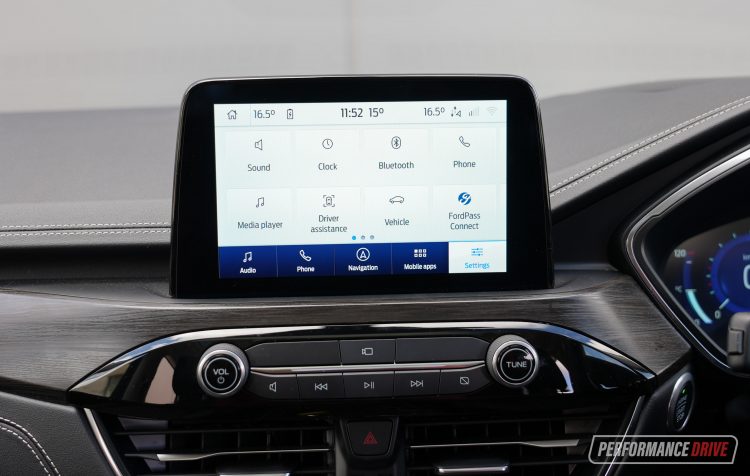 Ford has been very generous with the feature list on the Escape. It’s so feature-packed that there is not a great deal more if you opt for the top-spec Vignale for an extra $9.5k. You get the upgraded 10-speaker stereo, 19-inch alloy wheels (optional 20s fitted here, $500), active cornering headlights, head-up display, a panoramic roof, scuff plates, side skirts and leather seats (though, they are a tad too flat).

In terms of actual dimensions, the Escape is 89mm longer and 44mm broader than the previous model. The wheelbase has also increased by 20mm. In the cabin, that means 43mm of extra shoulder room and 57mm more hip room in the front seats. And rear passengers enjoy 20mm more shoulder room and 36mm more hip room. Ford also states there is 13mm more headroom in the front, and 35mm in the rear, even though the overall height has decreased by 20mm. 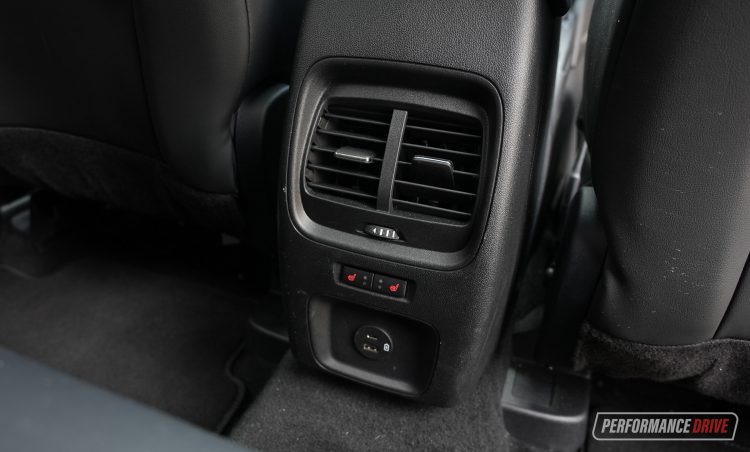 In terms of warranty, Ford is up to industry standards by providing a five-year, unlimited kilometre warranty on the Escape. Servicing intervals are required every 12 months or 15,000km. Servicing is capped at $299 for four years or 60,000km. 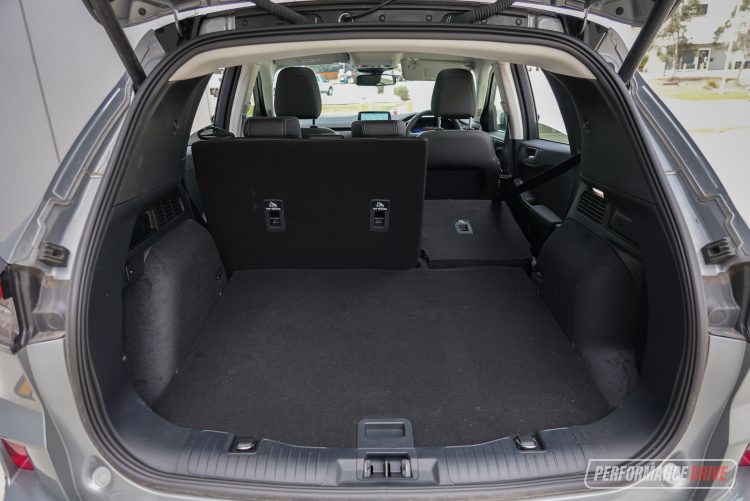 The EcoBoost engine is your typical 2.0-litre turbo petrol engine, but it belts out a thrilling 183kW of power and a confident 387Nm of torque. It makes the SUV feel tremendously light on its feet as it zips up to speed effortlessly – even when accelerating lightly. It’s also free-revving and NVH levels are notably low, meaning it feels natural and happy to perform. Our tests revealed a 0-100km/h time of just 6.41 seconds. Kudos to Ford for this fantastic engine and making it available as standard throughout the lineup.

It does cause a lot of wheelspin due to all that power channelling through the front wheels – we are hoping to test an AWD option at some point. The engine is matched to an eight-speed auto transmission, which goes a long way towards making the Escape feel so lively. Thank goodness there are no CVT autos to be seen. First gear is quite low, which helps that initial take-off. Our test car exhibited a small quirk when backing off the accelerator quickly, often giving off a mild shunt or jerkiness. Though, it may have just been unique to our test vehicle.

You might think that such an enthusiastic engine means that fuel economy will take a hit. It does a little. Officially, it burns 8.6L/100km. Surprisingly, our test revealed a lower 8.3L/100km. Our average makes it sit among the norm within this market segment, or a bit under-par in some cases. But if you’re an aggressive driver, your average might be a little higher. Although we’re not big fans of the start/stop feature when stationary, this one is refreshingly one of the smoothest and quickest that we have experienced. 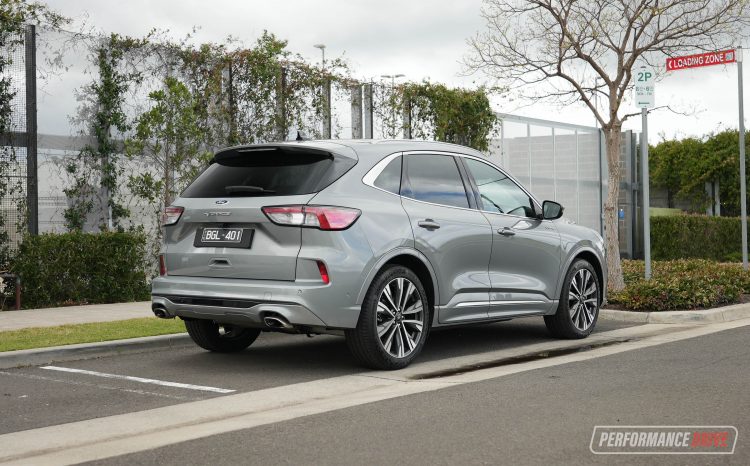 Most owners won’t intend on going off the beaten track and onto some heavy off-road adventures. If you do, you will go further in something else. The Escape Vignale is an SUV built for light off-road duties only. It has 20-inch alloy wheels, and a rather low ground clearance, running 190mm (191mm on the base model and 178mm on the ST-Line). This is low enough to require extra care when parking next to gutters.

The suspension is more on the soft side, so it absorbs bumps impeccably. There are no complaints on comfort levels when it comes to Australia’s rough roads. In turn, this means that handling is less performance focussed. It’s nothing terrible, but lean kicks in prematurely and grip starts to diminish earlier in the corner.

We feel like the steering is much too sensitive for a mid-sized SUV. It’s as if they ripped it out of a sportier and smaller Ford Focus and didn’t bother to calibrate it to give more feel and security. The issue is, you only need to turn the steering wheel slightly for it to turn, which causes sudden and nervous cornering. And given the softer suspension, it feels like the steering is too eager for the car’s handling abilities. This also results in prominent bump-steer, where the steering wheel jolts when you proceed over a large bump. 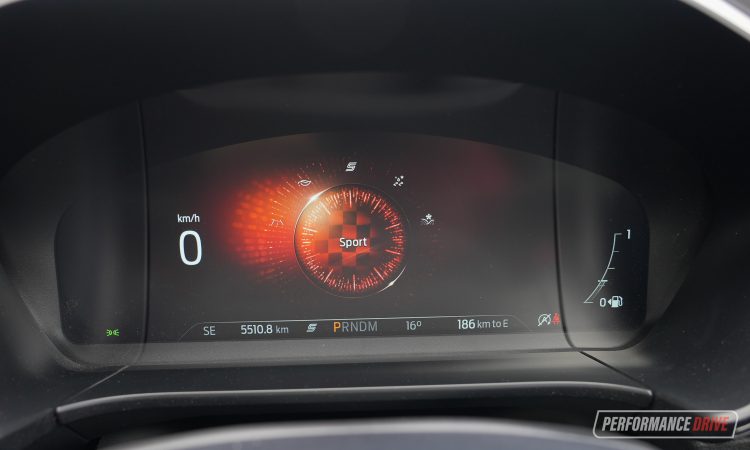 On the road we are impressed by all the safety tech in operation. It works accurately and is not too intrusive. Some emergency braking and parking sensors are too sensitive, but not here. We also found the adaptive cruise control to be one of the more intuitive systems on the market.

The Escape uses an innovative technique to defog the windscreen, a bit like the rear demister. But this means there are annoying wriggly lines embedded all over the windscreen.

In case we didn’t emphasise it enough, we think the EcoBoost engine in the latest Ford Escape is one of the strongest performers on the market. And that’s not only in terms of power, it’s also by NVH standards too. We also love the well thought-out interior with all its practical features. Like the rear seat rails, umbrella pockets in the doors, and overall space.

But the mid-sizer is let down by some build quality issues, and an unrefined steering feel. If you have a high attention to detail, it will bug you. If you’re not really fussed on presentation and quality in the long term, then it won’t be a problem. And, it is one of the most affordable mid-sized SUVs you can buy. In fact, the base model has so many features, there is little need to opt for the ST-Line or Vignale.

PROS:
– One of the most powerful engines in the class
– Impressive value for money against rivals
– Practical interior; sliding rear seats, long door pockets for umbrellas, lots of room
– Digital instrument cluster looks classy and is easy to read