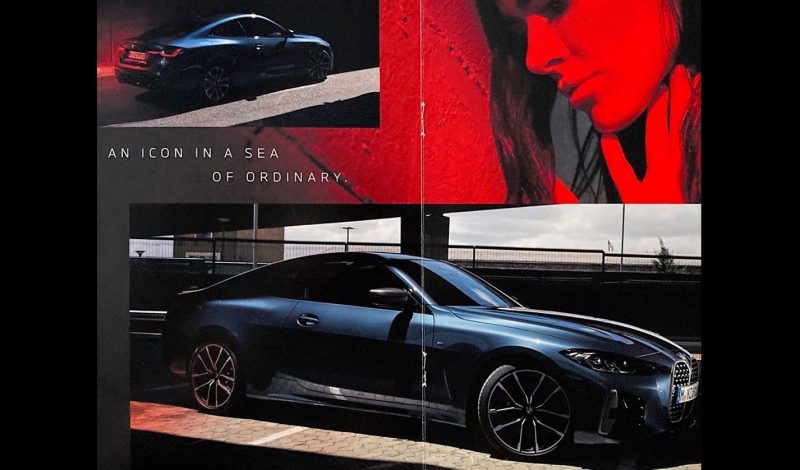 Images of the all-new 2021 BMW 4 Series have leaked online in the form of, what looks to be, an official brochure, just one day before the official debut is set to take place. Yes, firstly we have to mention the elephant in the room; that grille. BMW gave us a preview of this with the Concept 4 last year, and now it looks like it is making its way onto the production car. We suspect we might see more of this in future BMW models, although there is a chance the full-length treatment could be reserved for upcoming sports models.

Aside from the dominating presence of the grilles, the new model also showcases a fresh body design. And despite being based on a very similar version of the CLAR platform as the 3 Series, the new 4 Series appears to adopt unique body lines, particularly around the rear wheel arches.

The lines look sharper, with a more defined edge running along the middle of the doors. A more aggressive bonnet skin is also applied, and of course it stretches further out for a more elegant and sporty profile. Around at the back is a completely new boot lid, taillights, and swooping rear windscreen. BMW has already confirmed there will be an M440i sitting at the top of the range. It’ll feature the latest B58 3.0-litre turbo inline-six engine, with 48V mild-hybrid tech capable of providing 8kW. In the current M340i the engine produces 285kW and 500Nm. In a statement handed out in April, BMW said:

“Powered by a potent straight-six engine delivering maximum output of 275kW/374hp, it will also feature 48V mild-hybrid technology, with a 48V starter-generator and a second battery employed to both ease the load on the engine and act in unison with it. Besides improved efficiency, the principal benefit here is punchier power development when the driver hits the accelerator hard. The additional 8kW/11 hp generated by the electric boost effect underpins lightning-fast off-the-line getaways and in-gear sprints.”

All is scheduled to be revealed on June 2, with a special online event available for live stream over at the BMWGroup website here.