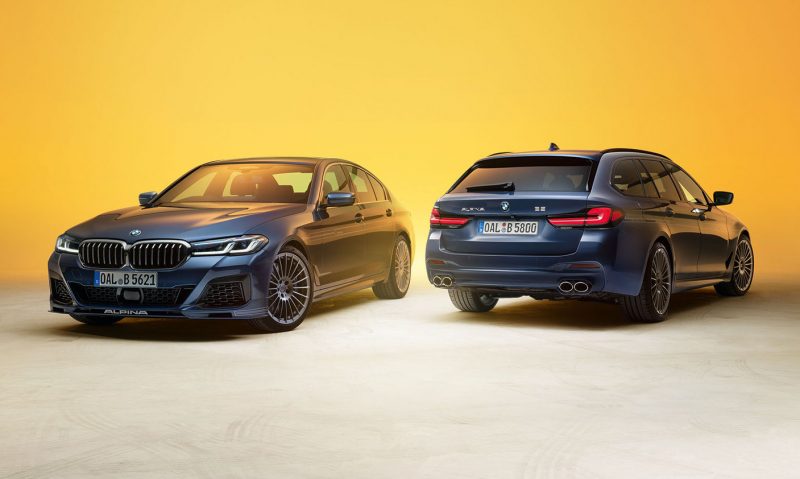 Following the debut of the 2021 BMW 5 Series LCI facelift a couple of weeks ago, tuner and manufacturer Alpina has now unveiled an update for the 2021 Alpina B5 and D5 S range. Across the 0-100km/h sprint Alpina says the sedan will stop the clock in 3.4 seconds while the Touring wagon takes 3.6 seconds. Even more impressive, 0-200km/h takes a claimed 11.3 seconds and 11.9 seconds, respectively. Top speeds are 330km/h for the sedan and 322km/h for the Touring, making it one of the fastest production four-door cars in the world. Improved performance is thanks to a range of optimisations, including for the twin-scroll turbochargers (54mm turbines), the cooling systems (larger intercoolers), and for the engine computer system. An eight-speed auto continues but with revised electronics, and Alpina’s specific rear-biased all-wheel drive system ensures maximum traction.

As for the new D5 S (not sold in Australia), its 3.0-litre triple-turbo-diesel inline-six now produces 300kW and 800Nm, providing 0-100km/h runs in just 4.4 seconds for the sedan and 4.6 seconds for the Touring. The engine is homologated to the latest Euro 6d emissions standards, and offers a WLTP-rated average consumption of 8.7L/100km. In terms of the design, Alpina has taken the 5 Series facelift and enhanced it. The updated front end features a new bumper bar that incorporates air intakes that are 40 per cent larger than before, with new-look LED headlights or the optional Laserlight setup providing a more modern look.

Around at the back you’ll find Alpina’s discreet quad-outlet exhausts integrated into the contours of the revised rear bumper bar. The exterior is of course topped off with Alpina’s traditional 20-spoke Classic forged alloy wheels, available in Black or Himalaya Grey.

Australian details are yet to be confirmed, however, Alpina on a global scale says the update is available to order now. Customer deliveries in Europe are scheduled to commence in October.