The big beast is back for another model year. This time the Y62 Nissan Patrol receives a significant facelift. The most significant ever, in fact. But is it enough to win the hearts of modern buyers? Let’s take a look. Headlining the 2020 Patrol update are, mainly, a bunch of cosmetic changes. There’s a new front end that incorporates all-new C-shaped LED headlights with daytime running lights, with Nissan’s V-motion grille sitting proudly in the centre. Most of the body, including the doors and roof design, are carried over from last year’s model (and before that). Around at the back is a tidied up tailgate fascia with almost-C-shaped LED taillights matching the front. A centre trim piece connects the two lights for that fashionable full-width treatment.

Finishing off the design revisions are a set of new-look alloy wheels. This Ti variant showcases 18-inch double-spoke items, which are wrapped in chunky 265/70 Bridgestone Dueller All terrain tyres, front and rear.

Two variants remain available in Australia, spanning from the Ti to the top Ti-L. Prices start at $76,990 and from $92,790, respectively (excluding on-road costs). For the Ti specifically that’s a price hike of around $4110 over the 2019 Ti. If you’re after a massive vehicle, you’ve definitely come to the right place. This is enormous. Climbing inside requires some muscle as you haul yourself up, and once you’re in it can feel like a bus. There is so much room to move about, with excellent headroom in the front and ample legroom and width. The centre console lid is big enough to sit on, and the centre console is wide enough to meet social distancing regulations (probably).

Overseas markets welcome a nice new dashboard which includes two crisp touch-screens (pictured below, bottom). Unfortunately Australians are given the old dash and touch-screen. It’s a weird hybrid of new exterior and old interior. And it sucks. We think it’s a real shame as this 1990s wood trim and faded and low-resolution screen just isn’t good enough by today’s standards. You can forget Android Auto and Apple CarPlay. This screen looks like it was invented at the same time as the first digital calculator. 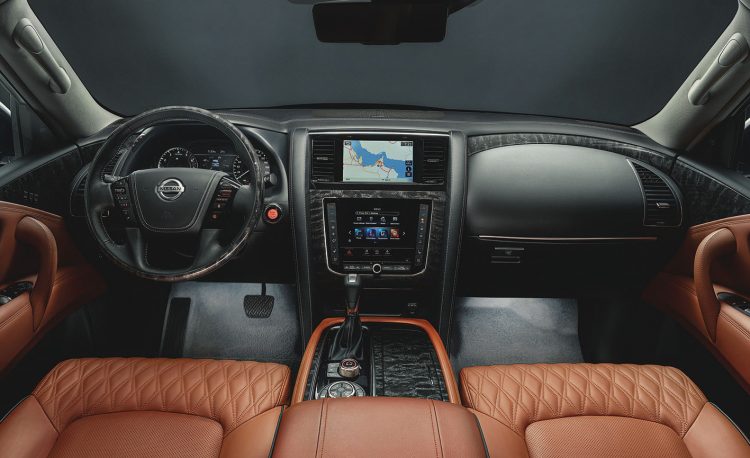 We’re afraid it’s a similar story with the instrument cluster. While the price tag of the vehicle is attractive (for what it is), we’re now seeing why. There is simply no reason this should cost any more. If anything, the price should have dropped compared with the previous model. The analogue gauges are difficult to read at first and the central big-pixel digital trip computer screen is a shambles. It doesn’t help that Nissan is already suffering in these departments in many other vehicle segments in our opinion. And of course the overseas version gets a nice new cluster with a big digital portion.

The driving position is perched up and very, very commanding. There is a definite confidence boost as you sit behind the wheel. We would like a bit more adjustment from the steering column, probably because this writer is a shortarse (170cm), but apart from that the view out the front and to the sides is extraordinary. The view out the back isn’t as much, mainly due to the big headrest that pokes up from the very middle seat. You can simply extract the headrest when not needed, which is what we did, and everything is fine. No family could possibly need more space in middle row than what’s offered in the Patrol. The legroom is almost ridiculous. In fact, you will probably fail to resist grinning when you first see just how much room is presented. Don’t worry about the kids sitting back here. You’ll want to sit here – parents with older teenagers can finally relax and enjoy the ride. There is climate control in the back, along with dual USB ports and a 12-volt socket – it’s almost more modern than the front area.

Right up at the back the third row is accommodating, even for adults. There is adequate legroom and headroom isn’t too bad. If you’re tall that could be a bit of an issue, but hey, it doesn’t get much better than this in the seven-seat SUV market. Boot space is also commendable, measuring in at 468 litres with all seats in place. That’s more than many small-to-medium hatchbacks. It’s a 5.6-litre V8. Even just saying that out loud sounds reassuring, doesn’t it? It makes you feel empowered when you start it up, too. Before we get to the nitty gritty of the drive experience let us just touch on the sound for a second. From the exhaust outlet at the back it is pretty muffled. But it’s not quiet. You can hear it is definitely a V8. From in the cabin, which is arguably more important anyway, the engine emits a beautiful, bellowing burble. It is delicious.

Open up the taps, which is actually really easy to do as the throttle response is surprisingly snappy, and it really comes alive. We think Nissan has turned down the throttle response a bit from the last model, which is good as it was actually too responsive, particularly for very tight and technical off-road conditions. Now, it’s still quite sharp albeit manageable. But yes, let it rev out and the soundtrack just gets better and better. We can’t stress enough how much we would love to see this engine in a sports car or even a sporty sedan. This isn’t some old-fashioned American V8. Codenamed the VK56VD, the engine features double overhead cams with variable valve timing, direct injection, and runs a high compression ratio of 11.2:1. The redline is 6000rpm and it gets there really quickly. Being a modern engine it does require 95 RON petrol. And with its 140-litre fuel tank, it can get expensive to fill. But we think this is all a price worth paying because it is such a great engine.

We know it’s obviously not a performance vehicle and we’re probably going on too much about the engine now, but we ran some 0-100km/h tests anyway to see what it could do. Using a private road and a Racelogic Vbox Sport the best result we conjured up was 7.41 seconds. The quarter mile was covered in a respectable 15.61 seconds. Again, in a smaller and lighter vehicle this engine would be bloody awesome. For reference this Ti variant, which doesn’t come with all of the luxuries available on the Ti-L, weighs a hefty 2708kg tare. That’s a big number.

The towing capacity is 750kg or 3500kg with a braked trailer/caravan. The gross combination mass (GCM), which is the maximum weight the vehicle is legally allowed to carry and pull, is 7000kg. While many so-called ute enthusiasts think they know what their vehicle is capable of towing, the GCM is the most important number as it includes passengers, stuff in the boot, everything. Seen as though the Patrol weighs around 2700kg, it leaves 4300kg for towing and cargo. That’s heaps. Although we didn’t load it up to test it we’re guessing it would be quite the experience driving along at near the 7000kg limit. For comparison, the equivalent LandCruiser VX (second from the top, like this Ti) with the 4.5 twin-turbo diesel V8 (petrol no longer available in Australia), the tare weight is 2670kg. It offers the same towing capacities and a GCM of 6850kg. Minus the tare weight, you’re left with 4180kg to tow and carry. That’s down by about 120kg over the Patrol, but even so both of these SUVs offer a much bigger overall capacity to tow and carry stuff than any four-cylinder diesel ute currently on the market. Just quickly, the HiLux SR5 4×4 auto has a leftover mass of 3605kg. In other words if you max out the 3500kg towing capacity that leaves just 105kg for passengers and cargo. The Navara ST-X 4×4 auto offers slightly more, with 3932kg leftover.

All of this weight does mean the fuel consumption rate isn’t the most attractive figure out there. Officially, the Patrol Ti uses an alarming 14.4L/100km on the combined cycle. All of you hardcore 4×4 and off-road enthusiasts might think that isn’t so bad. But in the real world and in modern times, without the big chunky tyres and heavy bash-plate add-ons you probably have on your modified 4×4, this isn’t good for a factory vehicle. And that’s the official average. You can expect to see north of that figure if you spend a lot of time in the city or in the bush. Interestingly, we averaged 13.5L/100km during our week of testing. It included some off-road driving and performance testing, but also a number of straight 80km runs to and from the office on the 100km/h motorway.

The emissions rating isn’t too crash-hot either, producing 334 grams of CO2 per kilometre. That doesn’t compare well with the Toyota LandCruiser V8 diesel, which emits 250g/km on the combined cycle. Speaking of off-roading. The Patrol is a natural. You ride on fully independent suspension all around, which provides good flex. For us though it’s the comfort that really benefits from this suspension layout. Smashing over corrugations and rough tracks is no concern at all. It barges and steamrolls over everything. Or at least it feels like that.

The constant four-wheel drive system seems to do a great job of directing the power, and there is a rear differential lock to get you out of really sticky stuff. The multi-terrain mode system can feel a bit electronic in our opinion, particularly in thick and boggy mud or in sand. In these conditions it’s often a good idea to switch all of the traction and stability systems completely off anyway.

According to the specs the Patrol offers an impressive 272mm of ground clearance, with an approach angle of 34.4 degrees. As you can see the front overhang is quite short making it easy to take on steep mounds and tricky entry points. At the rear you have a departure angle of 26.2 degrees. Fortunately, this test vehicle features a tow bar which helps to protect the bumper bar. This is something we’d recommend you fit as well. If you need a large SUV that’s very comfortable and spacious, smooth, great for towing, and extremely skilled off the beaten track, the 2020 Nissan Patrol Ti is an option you should seriously investigate. The fuel consumption is high and the dash is very dated, but these are downsides you can overcome by simply enjoying that glorious V8 engine.

PROS:
– So big and comfy, like driving a giant teddy bear
– Soothingly empowering V8 progress on the road
– Decent value for the sheer amount of vehicle you get
– Tank-like off-road ability
– 7000kg GCM